High performance devices supplemented with system solution support. In 2010, ROHM has introduced its first commercial SiC MOSFET into the power semiconductor market. Within the decade that has passed since then a lot of development has occurred. The SiC MOSFET is now firmly established as the most common SiC transistor in the voltage range of 650 to 1700 V.

In 2015, ROHM introduced the first commercial SiC Trench MOSFETs and is now ready to launch its newest generation into the market. In this article, the performance benefits of this new generation will be shown and various support tools will be introduced. These tools are intended to support power electronic converter designers in their mission to build the most efficient, robust, and cost-effective power converters with ROHM SiC MOSFETs.

One key parameter in the development of the 4th Generation SiC MOSFET was the further reduction of area-specific on-state resistance. As can be seen from Figure 1, that shows a comparison of the on-resistance for two ROHM SiC MOSFETs with equal chip size from the 3rd and 4th generation, this goal has been achieved. Furthermore, it can be seen from the RDS(on) vs. VGS plot that the 4th generation SiC MOSFET has a much flatter gradient between a gate voltage of +15V and +18V. Thus, operation at +15V as well as +18V is possible with only a small difference in RDS(on). 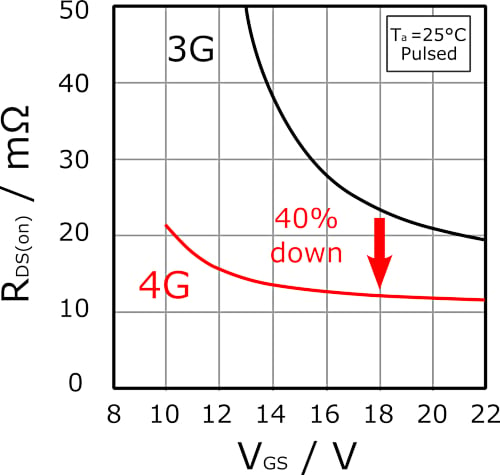 In addition to the improvements in RDS(on) and, hence, a reduction in conduction loss for devices with the same chip area, the 4th generation also offers an improved switching performance. To illustrate this improvement, the total switching energy values for two 1200V SiC MOSFETs in the same TO-247-4L package with comparable RDS(on) at 25°C are shown in Figure 2. At the selected gate drive configurations, di/dt at turn-on as well as at turn-off was comparable for both components. The results show that the 4th generation offers a switching loss reduction of up to 45%.

For the 4th generation, the ratio of device capacitances was optimized to minimize unwanted effects. Most notably, the ratio of the capacitance between gate and drain (CGD) and the capacitance between gate and source (CGS) is now much larger. Consequently, the high-speed voltage transient (dVDS/dt) applied on a SiC MOSFET by another very fast switching SiC MOSFET in, for example, a halfbridge, has minimal impact on the gate source voltage VGS. This reduces the likelihood of accidental parasitic turn-on of a SiC MOSFET by positive VGS spikes and mitigates the occurrence of negative VGS spikes that could harm the SiC MOSFET. 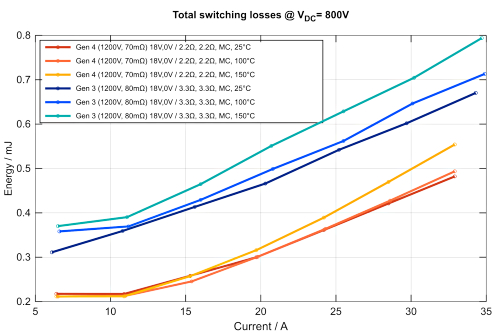 Overall, with the upcoming 4th generation of SiC MOSFETs, ROHM will introduce devices with both improved performance and improved ease of use for the customer. The devices will be released both as bare die devices for use in power modules as well as in discrete packages, such as TO-247, TO-247-4L, and TO-263-7L, for the voltage classes of 750V and 1200V.

ROHM is also providing a portfolio of tools to support design engineers in their mission to build the most efficient, robust, and cost-effective power converters. These range from several simulation tools to device-centered as well as topology-focused evaluation kits (EVKs) and publications containing technical information.

As in many other areas of engineering the design efficiency in developing power electronic systems can be greatly improved using simulations. ROHM offers various tools, which can be used in different stages of development. The offered simulation ecosystem consisting of simulation models and the ROHM Solution Simulator is summarized in Figure 3.

To support detailed transient simulations, ROHM offers device SPICE models that can be used to investigate switching waveforms or to study the effect of parasitic elements around the power devices. Such models are available for power devices as well as IC products, enabling the simulation of interactions between components, such as gate drivers and power semiconductors. In addition, simulation circuits of the basic circuit topology for SiMetrix can be downloaded from the ROHM website. Also, an expanded line-up of PLECS models is available. 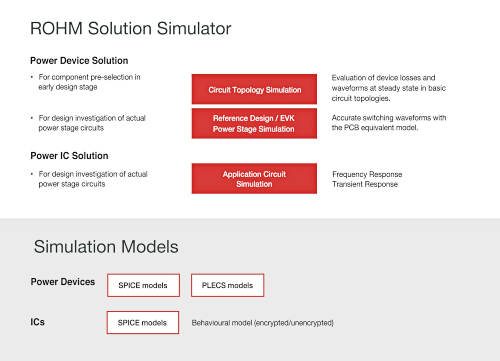 ROHM offers the ROHM Solution Simulator, a simulation environment that can be run on the ROHM website [1]. The ROHM Solution Simulator provides simulation circuits for power electronics using ROHM’s products, allowing users to perform simulations simply by setting some operating conditions. Simulation circuits that include power devices such as SiC MOSFETs and power supply ICs such as switching regulators are available.

In addition, ROHM's reference designs and power stage circuit simulations of EVK's are provided in the ROHM Solution Simulator. A power stage board consists of power devices, gate drive circuits, and protection circuits. The simulation circuit is designed to reproduce the switching waveforms on the actual board. The circuit operation and waveforms are affected by the parasitic inductance determined by the gate drive circuit and physical factors of the board design. To improve the accuracy of the simulated waveforms, an electromagnetic field analysis of the board was performed to extract the parasitic inductances of the patterns and reflect them in the simulation circuit. 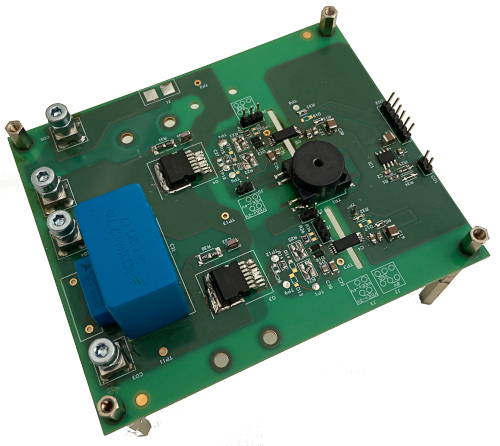 Half Bridge Evaluation Board (HB-EVK)

For customers to be able to evaluate ROHM’s 4th generation SiC MOSFETs in the SMD package (TO-263-7L), a simple and user-friendly half-bridge evaluation board is under development (see Figure 4). The performance of the SiC MOSFET along with optimal gate driving conditions can be analyzed using this evaluation board. The isolated gate driver IC BM61M41RFV-C – a single channel driver with 3.75 kVrms isolation and integrated active Miller clamping function – is used in this board. Other necessities, such as a compact isolated power supply generation circuit for gate drivers and an LDO for the 5V supply of the gate drivers, are available on the board. Turn-on positive rail voltages of 15V/18V and turn-off voltages of 0V/-2V/-4V are easily configurable.

The dimension of the board is 120mm x 100mm. With the devices in a half-bridge configuration, several power electronics applications can be studied. Individual analysis of SiC MOSFETs in a form of double pulse tests, as well as simple continuous operation tests in topologies such as synchronous buck/boost, asynchronous buck/ boost, and inverter mode, can be performed at low current/power. To operate continuously at higher power the user can add a heatsink to the bottom of the PCB.

ROHM’s 4th generation SiC MOSFETs (1200V, ca. 70mΩ) have been tested using this EVK. Figure 5 shows the turn on and turn off waveforms of the low-side device at a dc-link voltage of 800V, a load current of 26A, the gate turn-on voltage of 18V, and turn-off at 0V. The evaluation board offers the possibility to measure device currents either with a Rogowski coil or with a coaxial shunt. In this measurement example, a Rogowski coil has been used to measure the device current and a high voltage probe to measure the device voltage.

The half-bridge evaluation board shown here provides a platform to analyze the behavior of devices, such as 4th generation SiC MOSFETs, at different operating conditions and gate driving conditions. Other essential parts of the board, such as an isolated supply generation circuit, can serve as a reference for the designers to implement similar circuits in their designs. The evaluation board HB-EVK thus is a support tool for customers to realize an efficient and robust application design.

As an example of a more topology-focused support tool, an EVK for a Totem Pole PFC is shown here. This board integrates not only the power devices (4th generation SiC MOSFETs and Si SJ MOSFETs) and gate driver ICs, but also all sensing, control, and additional circuitry required in a typical industrial power supply based on the Totem Pole topology. Figure 6 shows a picture of the EVK with outer dimensions of ca. 210 by 90 by 55mm and a power rating of approximately 3 kW at an input voltage of 230 V AC. 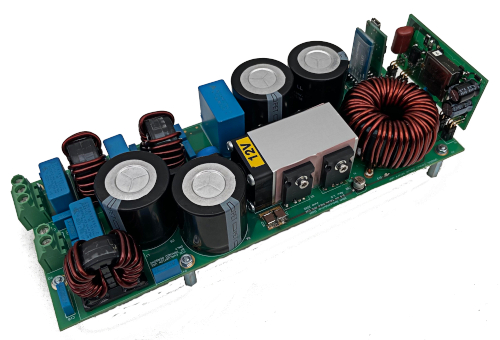 This board can be used to investigate the implemented topology in detail and to perform application specific benchmarking for example to check the impact of selecting different power semiconductors on the efficiency achievable in this circuit. As an example, the efficiency measured using 750 V SiC MOSFETs with ca. 50mOhm and Si SJ MOSFETs with ca. 38 mOhm at a switching frequency of the SiC MOSFETs of 100 kHz is shown in Figure 7.

Aside from evaluation boards and simulation tools a continuously growing set of application notes and further documentation is available to support design activities around ROHM power devices. Many of these give practical advice, e.g. for performing measurements in power circuits with very fast switching devices, such as ROHM SiC MOSFETs. For an overview of other support materials please refer to [2]. Finally, teams of experienced FAEs and AEs with lab resources in Europe as well as in Japan are happy to provide customers the application-level support they expect.

This article revolved around various technical benefits of ROHM’s upcoming 4th generation of SiC MOSFETs for 750V and 1200V. In addition, a selection of ROHM tools for design engineers were highlighted. These include

• simulation models suitable for SPICE based simulations or simulations in tools such as PLECS, as well as the ROHM System Solution Simulator,

• upcoming EVKs both to evaluate devices in a simple, but highly relevant, half-bridge type circuit and an application-level circuit of a Totem Pole PFC

With the combination of high-performance components and a wide set of support tools, ROHM aims to support designers in creating feasible and energy-efficient solutions for tomorrow’s power electronic systems.