This article discusses the importance of variable frequency drive (VFD) and its implementation in motor drive applications and induction motors.

Electric motors are all around us in appliances such as washing machines and refrigerators, and in transportation modes such as cars and in planes. We would not have many of the common modern conveniences we enjoy every day without electrical motors.

The first motors were invented in the early 19th century by historical figures and company founders such as Werner von Siemens, Thomas Alva Edison, Nikola Tesla and George Westinghouse. Without electric motors, everyday life would be very difficult to imagine.

But maybe even more important are the motors in industry which facilitated the assembly line conveyor belts used to manufacture consumer products and the motors designed into the automated welders used in the car industry. Motors also play important roles in other important sectors such as medical, aerospace, and renewable energy. There are two major applications where electrical motors are used. The first application is where motors are connected to the grid and are operated at a fixed rotor speed. The second is the wide application where motors need to be operated at different speeds and different torques. This application requires a power conversion unit to be placed between the grid and the motor and is usually known as a variable frequency drive (VFD). Let’s have a closer look at the differences between the fixed frequency grid operated motors and the VFD operated motors and identify the advantages of each application.

The end application determines if a motor needs to be operated by a VFD or just by the grid with a fixed frequency. Examples of fixed frequency grid driven applications are pumps or fans that move a medium without the need to adjust the medium’s speed and some conveyor belts used in the mining industry. 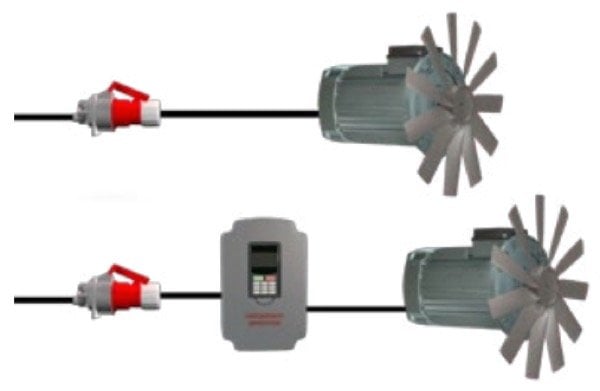 In some applications, the medium needs to flow with different speeds or the pressure of the medium needs to be adjusted. Valves, dampers or gearboxes can adjust some of these parameters but with a lot of drawbacks because the fixed frequency grid driven motor always delivers full power in this case and a significant portion of power is converted into heat. Therefore in many applications, a large percentage of the electric energy is wasted because these uncontrolled motors are not operated at their optimum speed and torque which is determined by the load or work required to be delivered.

To overcome these power losses, variable frequency drives are used. With these power conversion devices, the speed and the torque of the motor can be adjusted within a wide range to meet the needs of different applications. The most important two parameters from a technical perspective are the voltage frequency determining the motor speed and the supported current which results in the motor’s delivered torque. Commercially, energy and cost savings have been the major reasons for the increasing popularity of VFDs which typically are characterized by short payback periods.

Usually the energy conversion process from a fixed AC voltage to a variable AC voltage is as follows: First, voltage rectification from an AC grid voltage to a DC voltage, followed by smoothening of this DC voltage with capacitors and finally conversion of this filtered DC voltage back to AC with a frequency and voltage and determined by the desired motor speed and torque.

The most important conversion step in a VFD is the DC to AC inversion stage. A common solution to invert the DC voltage back to an AC voltage is the use of a Pulse Width Modulation (PWM) technique which normally requires a sinusoidal modulating wave and a triangular carrier wave. The triangular carrier wave is known as the switching frequency and varies between some hundred Hertz for high power drives to approximately 20 000 Hertz for lower power drives. The sine wave is a reference generated by the inverter’s control circuitry and will be the frequency at which the motor will operate. By comparing triangular carrier and the reference sinusoidal waves, a pulse width modulated rectangle voltage will be the output of the VFD which changes its polarity at each crossing of the sinusoidal wave and the triangular wave. The modulated rectangular voltage drives the motor and results in a sine wave motor current with a high frequency ripple current similar to the triangular carrier’s frequency.

Several advantages are experienced when a VFD is used to operate a motor.

The starting current of a grid connected AC motor can vary between 3 and 8 times its nominal current. This is because a huge amount of current is needed to magnetize the motor to overcome its inertia. This high current has to be provided by the grid and can cause issues such as voltage drops and transients and in some cases even a shutdown. These high currents also create mechanical stresses on the motor’s rotor bars and windings. A VFD starts the motor at zero voltage and zero frequency and typically requires between 50 % to 75 % of the motor’s current under full load.

As the motor’s power is defined by its voltage times its current, the power demand during start-up is much lower by using a VFD compared to a motor which is directly connected to the grid. This is especially true at start-up if the load power demand is the same on grid or with a VFD. If a company is at its power limit with its existing electrical installation system, newly installed machines without VFDs can generate unsupportable high start-up currents and force these operators to upgrade their electrical systems to carry these peak currents. Also, some companies are charged extra for the peak power provided by the electrical utility. A VFD is a good solution to resolve these start-up surge current issues.

Motor start-up causes a high input current which causes a voltage drop on the line. Some sensitive equipment can trip offline due to these low voltage drops. For example, computers, sensors and contactors are known to be voltage-sensitive and can drop out during low line conditions. The use of a VFD eliminates this issue as the motor starts with zero voltage/low input current and ramps up. Also, a speed and torque change appears on the motor’s shaft when the voltage drops and the motor is operated directly from the grid. This might be quite unwanted in some manufacturing processes. Controlled drives can be designed to be less sensitive to grid voltage changes enhancing the “ride-through” capability of the motor.

An immediate motor start through the grid creates a huge mechanical stress to the motor and to the distribution system connected to the motor resulting in mechanical shocks. A VFD can accelerate the motor with a defined ramp reducing shocks to a negligible level. In some applications, it is not possible or acceptable to accelerate the machine to its maximum power and speed without a smooth controlled ramp.

The most important advantage of a VFD is its ability to adjust the motor speed to the needs of the whole application. The second most important advantage is its ability to adjust the motor’s torque. This is quite a nice feature which protects the motor and the system driven by the motor from damage as the torque can be limited or precisely adjusted. Also, power savings can be considerable by being able to control the motor’s torque. For example, a VFD driven motor connected to a fan will only consume 1/8th of its rated power when operating at half speed due to the cube root speed-to-power relationship of this system.

The controlled stopping or braking of a motor can be as important as its controlled acceleration. The greatest advantages of VFDs are realized in the braking of elevators and conveyer belts. This braking or reverse operation of motors is of great interest in many other applications. Reverse operation is possible by changing the rotary field in the motor by the VFD without having to change the order of the phase cables to the motor. VFDs also eliminate the need for valves, dampers and gearboxes. This leads to more compact systems, lower maintenance and lower operating costs.

The important components inside a VFD are the power rectifier diodes used to rectify the AC input voltage, the brake chopper which is used to dissipate the regenerated energy from the motor during braking and protects the DC link capacitor from damage, and the power semiconductor switches used to convert the rectified input voltage back to a controlled variable voltage and variable frequency output. The requirements of the rectifier diodes are not that great since these devices operate at the input line frequency (50 Hz or 60 Hz) and are available from many suppliers. Requirements for the components used for the DC to AC conversion stage need to be considered carefully as these power semiconductor switches are used at high voltage and high currents and switched at high frequencies. Usually IGBTs are used as the semiconductor switches due to their optimization for these applications and designer familiarity for these industrial applications. 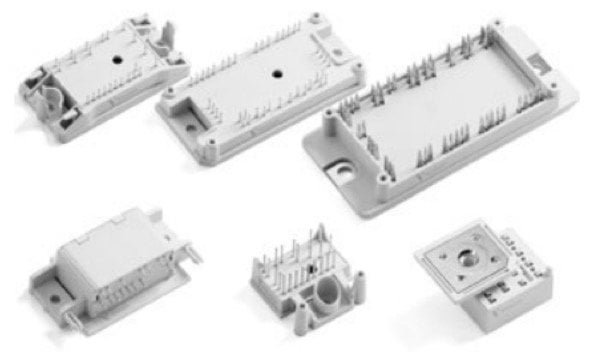 Today, many companies develop semiconductors and power modules that can be used in VFD designs.

Modern life is unthinkable without the benefits provided by variable frequency drives. With VFDs, induction motors can have their speed and torque adjusted, inrush currents are much lower and reverse operation is easily implemented. The most important advantages VFDs provide are lower system operating costs, the absence of additional mechanic components and savings in electrical energy. All in all induction motors and variable frequency drives contributed to our daily convenience and provide us with a more efficient and cleaner environment.