The benefits of brushless motors have been marketed in recent years, reference vacuum cleaners and portable drills for example. Motors with/without integrated permanent magnets are finding their way into a plethora of new generation products including appliances and electric vehicles. Hence electric motor technology is firmly back in the media with a consequential increase in public awareness. This article reviews where these motors and their hybrids originate, some pros/cons and the associated control complexity. Understanding this plus the trade-offs and algorithms can assist with optimizing a complete motor control system design.

As companies seek to differentiate their products, they are paying attention to efficiency. The latter word has many context related meanings. For example, a product which reduces the amount of time required to complete a task like vacuum cleaning your house would be deemed to be efficient by the end user. Here we also have robot technology available to let humans do less manual work and have more time to play! Similarly so, if a product is lighter in weight, maneuverable and easier to use by a human operator.

In fact, there are many scenarios for illustrating the efficiency point and so far, designers could address this without necessarily focusing on the motor design in detail.

However, today’s product standards are increasingly focused on reducing power consumption and labeling products for public awareness accordingly. This has spawned from the appliance market and is trending in others. It also impacts motors sold on the open market for Industrial applications by way of example. Thus there is a move toward product refinement involving each of its subsystems. However, the cost constraint also makes the time to move to improved technology a moving target. 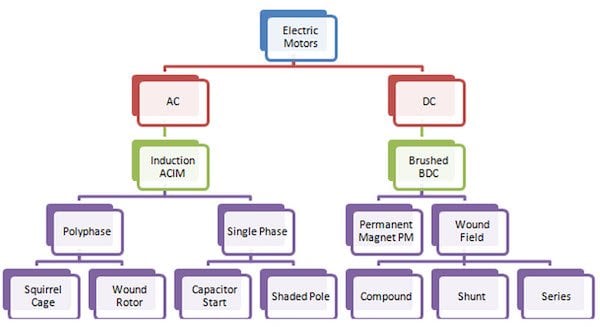 Motor technology continues to be refined but the supply and demand for key raw materials can dramatically influence product competitiveness. For example, there was a notable impact when permanent magnet temperature stabilizing elements’ availability was restricted in China. When this happens, the phone tends to ring from concerned OEMs seeking alternatives. Some would say this is business as usual!

The History of Motor Types

Let’s look back at the history and where and why some specific motor types are being deployed in new generation products. First, let's look at the pros and cons of some popular motor types:

Motor conception goes back several hundred years and thereafter fundamental types evolved to leverage AC & DC power availability. Control via electrical engineering methods and components was limited in contrast to today. In the 20th century, the ACIM (AC Induction Motor) tended to be used with fixed speed applications (predominantly fans and pumps) and for variable speed the DC motor was deployed especially in process control applications and railway traction.

The ACIM became the industrial workhorse with lower maintenance requirements. Both types scaled to MW power machines and Industry was the major user of electric motors.

With electronic component availability starting in the 1950s and 60s improved motor control was enabled and further motor types were developed or refined. Thus, the dependence on either AC or DC supply was removed through electronic conversion. Therefore, the overall main motor types categorization could be changed to Asynchronous and Synchronous from AC/DC. The number of smaller motor applications increased with deployment in the home and car. Especially for automotive applications, the brushed and brushless DC motor (synchronous) have been dominant and similarly the ACIM (asynchronous) for appliances in the home.

Hybrid infers evolution and for an electric motor, we can think of this as a combination of torque producing mechanisms. The physics behind this leads to three fundamental principles/ forces:

Designing in a combination of these leads to a hybrid motor. This affords versatility in machine design with multiple modes of operation possible.

The interior permanent magnet synchronous motor (IPMSM) is an example of hybrid design which leverages permanent magnets but also reluctance force. The contribution of each can be tailored by the machine designer and accounted for using an advanced control algorithm. Embedding the fundamental motor equations or model inside the firmware breaks out the two torque producing components and a commutation angle compensation is calculated. This leads to the maximum torque per ampere (MTPA) being extracted from the motor, which is a refinement that can yield a few percentage points efficiency gain if the reluctance torque contribution is small.

As the names suggest the IPMSM has magnets placed inside or embedded in the rotor whereas the surface permanent magnet synchronous motor (SPMSM) has them placed on the surface. The key thing is the SPMSM rotor magnets can be made into an effective contiguous magnetic assembly whereas the IPMSM has defined boundaries and gaps in between. These give a path for the reluctance force to come into effect and hence there is a torque contribution which can be leveraged in addition to say the main torque coming from the magnets.

The IPMSM has been applied in Modern HEV (Hybrid Electric Vehicles) and other applications seek some of the benefits, HVAC and Appliances for example.

There is no all-around winner, but hybrid designs pave the way.

Particularly in hybrid motor system design attention to detail and additional control complexity is required to extract the best performance for a given application. A one size fits all approach is not applicable. However, there are some fundamental algorithm building blocks and customizable/application-centric ones which can be leveraged. On top of that additional application-centric refinements and modes are designed in for an effective expert form of control. The complexity is affected by a range of design requirements, one of the key things is if the application will use a rotor position sensor or not. The other is getting the interactions between all the control subsystems to work seamlessly across the speed range and operating conditions.

The digital control element needs to have enough resources and especially bandwidth to serve all this complexity and application refinements. The trend is most definitely to optimize the motor control system, focus on safety, problem reporting and even add functions such as predictive maintenance scheduling. The latter could be a distributed scheme using cloud-based servers. Hence the software tasks need to be scheduled to cope with the hard real-time performance demands alongside everything else. Here the designer has options to create a modular or single chip implementation and in support there are evolved devices available to consolidate the solution. This invariably comes down to the target market and volume but the baseline is shifting, meaning the lower cost products are becoming more complex.

The Growing Complexity of Motor Control

Advanced motor control used to be name tagged to field oriented or vector control and associated with digital signal processors (DSPs). However, the new era heralds further attention to detail because evolution, legislation and remaining competitive demands it. Systems are therefore more complex and resources scale up accordingly. To make an expert system is for sure an engineering challenge and extracting small percentage efficiency gains help enable the way to the optimized/green world we are striving to make. Refinement and development of motor designs and their control algorithms is the key.

Martin Hill spent that the last 14 years working for Microchip, largely on motor control and spanning most market areas/applications. He was World Wide Motor Control Function Group Leader before starting his own technical consultancy business.