The SEMITRANS 20 meets the increasing power demands of converters for renewable and high power motor drive applications, requiring higher power density and scalability. The output power for converters has steadily increased with time, with the newest wind turbines now capable of producing up to 15MW. Such increases in power present new challenges for developers focused on renewables and drives, achieved by increasing voltage, current, or both.

The SEMITRANS 20 enables a higher current capability than previous generation power modules with the latest packaging and chip technology. It is also optimized for parallel operation in order to further increase the converter current capability. Additionally, the SEMITRANS 20 enables simple implementation of 3-level topologies, which is a key to increasing the operation voltage.

For high power applications, power modules connect multiple IGBT and diode chips in parallel to increase overall current rating. In doing so, however, the power module design must ensure even current sharing among the chips in parallel. An unequal current distribution would lead to some chips heating more than others, ultimately reducing lifetime. The SEMITRANS 20 package eliminates this concern by enforcing even current sharing through its symmetric Direct Bonded Copper (DBC) layout.

As shown on the right in Figure 1, each IGBT and diode in the SEMITRANS 20 is connected to the DBC with symmetric paths to the terminals. This symmetric layout ensures even current sharing among the chips for each switch, which becomes especially important at increased switching speeds. Its homogenous stray inductance makes the SEMITRANS 20 an ideal candidate for Silicon Carbide in the future.

For switching frequencies below the 10kHz range, the new M7 IGBTs maximize space utilization by increasing the current in a given chip area. The SEMITRANS 20 further optimizes its footprint on the heatsink by utilizing over 70% of its baseplate for active chip area, while previous power module designs only used about 55%. This increases current and thus power density, but thermal resistance must then be carefully considered in order to keep the chips cool, enabling safe operation and increased life.

The higher current per square millimeter creates a new challenge: cooling the chips in a limited area, which requires a reduction in thermal resistance. To resolve this, SEMIKRON offers the new High Performance Phase Change Material (HP-PCM), which is a thermal interface material that achieves a thermal resistance similar to that of our benchmark thermal paste High Performance Thermal Paste (HPTP). Phase change material eases manufacturing, since it is solid at room temperature and less sensitive to debris, which can be easily brushed away. Since phase change material is challenging to apply, SEMIKRON also offers power modules with pre-applied HP-PCM. The phase change material is applied in a controlled, dust-free environment with optimal printing patterns for each housing. This in combination with a 4-screw mounting approach reduces overall assembly cost and effort.

Once a target output power is higher than a single module can handle, paralleling is required. While driving each power module with individual drivers is possible, this increases cost and decreases the calculated Mean Time Between Failure rate (MTBF). That is as numerous driver components are incorporated and the MTBF decreases with each component added to the system. Therefore, a single driver for multiple modules in parallel reduces cost and increases reliability. Driving multiple power modules with only one gate driver comes with certain requirements: not only does the gate driver need sufficient output power; sharing the driving power evenly between the power modules is also important.

With its symmetric layout and low stray inductance of only 10nH, the SEMITRANS 20 allows even current sharing among the modules with a single driver, as shown for a short circuit event in figure 2. In combination with the SKYPER 42 LJ PV, the SEMITRANS 20 offers scalability for high-power applications up to 1500VDC. With its increased output current, a single SKYPER 42 LJ PV provides sufficient power to drive up to five SEMITRANS 20 modules in parallel switching at 2.5 kHz. This allows for water-cooled power blocks of up to 3.5MW output power. The driver core design provides flexibility to adjust the number of power modules in parallel while maintaining high reliability as a qualified SEMIKRON product. For 3-level topologies, it also offers users the capability to customize the turn-off sequence in order to implement a safe shutdown in case of a short circuit condition. 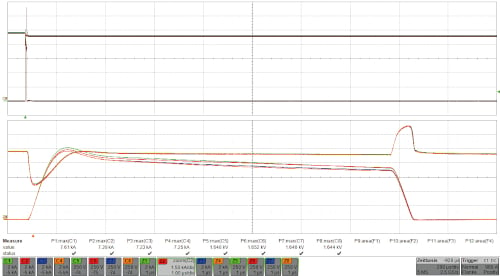 Since increasing the system current requires more costly cables with higher cross-sections, increasing the voltage should also be considered. Presently, the low voltage directive for renewables allows operation up to 1500VDC. Implementing a 3-level topology enables converters to achieve these high voltages while still using standard 1200V devices. Additionally, filter effort is reduced thanks to a doubling in the effective switching frequency at the inverter output for 3-level designs.

For bi-directional power flow, the Active Neutral Point Clamp (ANPC) topology has gained popularity as it provides consistent losses throughout the power factor range. This allows energy storage to push and pull the same amount of power to and from the grid. For high power systems, this ANPC configuration can be made using standard half-bridge modules.

In the High Frequency / Low Frequency (HF/ LF) configuration the DC input side is switched at the PWM switching frequency (e.g. 3kHz) while the AC output side is switched at the grid frequency, typically 50/60Hz. In this configuration, the commutation loop for the fast switching input side is kept short within a single power module, shown with dotted lines in Figure 3. The connection between input and output stages switches at the grid frequency, allowing slow switching for the longer commutation loop (solid line in Figure 3).

Thanks to its terminal locations, the SEMITRANS 20 offers a simple solution for any ANPC power electronic stack, as shown in Figure 3 (right). This enables a simple threelayer DC link design and smooth connections among all three modules per phase. Additionally, all driver connection locations are accessible, even after connecting the DC link and busbars.

In addition to ever-increasing power, the rotor side of wind converters often operates at a low fundamental frequency, especially for Doubly Fed Induction Generators (DFIG) or in generators without gearboxes, such as Direct Drive (DD) wind turbines. This lower frequency can stress power modules by subjecting them to very high load cycles. For the highest reliability in wind, the chips in 1700V SEMITRANS 20 power modules are attached to the substrate via sintering, shown in Figure 4. 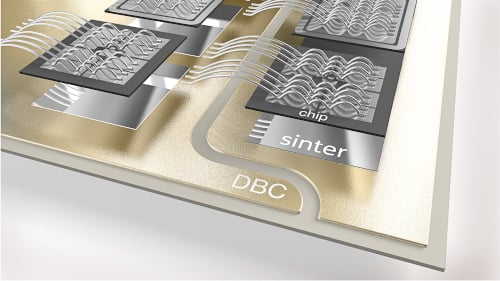 With its high current capability and scalability, the SEMITRANS 20 enables increased power for renewables and high power drives. The symmetric package design in combination with the latest IGBTs enables higher current density. To cool such a power-dense package, the new High Performance Phase Change Material offers reduced thermal resistance from power module to heatsink. The SEMITRANS 20 is also simple to implement into an HF/LF ANPC configuration, great for bi-directional, 1500VDC applications such as wind and energy storage. For wind applications using 1700 V devices, sinter technology increases the SEMITRANS 20 power cycling threefold compared to standard solder technology to increase lifetime. This makes the SEMITRANS 20 the perfect package for the next generation of high-power renewables and motor drives.