This article investigates the full-bridge LLC converter with variable-frequency operation and multi-domain interactions through modelling and simulation.

TO-247 4pin package with Kelvin emitter enables faster commutation, improving the switching behavior of the 650V TRENCHSTOP™ 5 IGBTs. Dynamic losses are reduced by 20% in comparison to standard TO-247 package, thus increasing the overall system efficiency and enabling the IGBTs to operate at lower temperature.

Recent improvements in the IGBT technologies have reduced the switching losses of the devices considerably. This has been achieved through changes in the structure of the IGBT chip. Figure 1 presents a comparison of switching energies of discrete 50A rated IGBTs from different technologies. The IGBT and the co-packed diode technologies are indicated at the bottom of Figure 1, as well as the year in which they have been brought to the market. The energy has been measured in a switching cell, using a device from the same family and of identical current rating as counterpart.

A deeper look inside Figure 1 reveals how impressively the turn-off energy of the IGBTs has decreased in the recent families. This has been achieved by decreasing the fall time of the current during turnoff, thus removing the tail current almost completely. 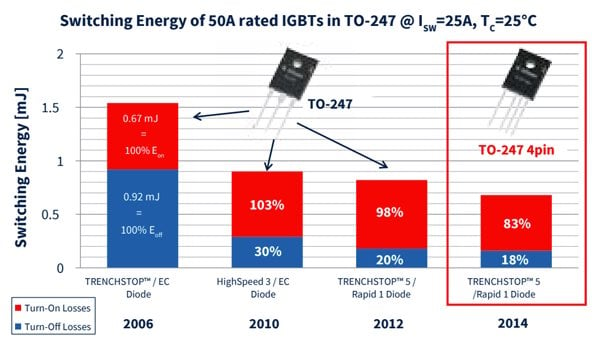 On the other hand, turn-on energy has practically not changed. One of the main reasons for this is the fact that the turn-on behavior of the IGBT is strongly depending on the counterpart diode and its amount of reverse recovery charge. Actually, the amount of recovery charge tends to increase when the diode is combined with a faster IGBT, thus increasing the switch’s turn-on losses.

To achieve a considerable reduction of turn-on losses, the TO-247 4pin package is now being introduced for devices of the TRENCHSTOP 5 family. This package contains an extra emitter pin to be connected exclusively to the control loop and has already been successfully used in combination with super junction MOSFETs from CoolMOS™ C7 technology[1].

With the Kelvin emitter configuration, the switching speed is increased further. Consequently, the switching losses are reduced in both flanks, even if the same counterpart diode remains in use. As one of the advantages, the adoption of the TO-247 4 increases the overall system efficiency and allows the IGBT device to operate at lower temperature.

In standard through-hole packages, as for instance TO-220 or TO247, each lead pad resembles a parasitic inductance. The inductance from the emitter pad in particular is a part of both, power and control loops.

The voltage attenuation given by the emitter lead inductance Le causes a reduction of the effective gate to emitter voltage. It can be quantified as the value of Le multiplied by the change rate di/dt of the emitter current. Due to this attenuation, the commutation time is extended, leading to higher switching losses.

The newly introduced TO-247 4 package has an extra connection to the IGBT’s emitter, labeled E2 in Figure 2. This point shall be connected to the gate driver. Also known as Kelvin emitter terminal, this pin is not subject to the attenuation coming from the power loop. The current coming from the IGBT’s collector is solely conducted by the power emitter lead E1. 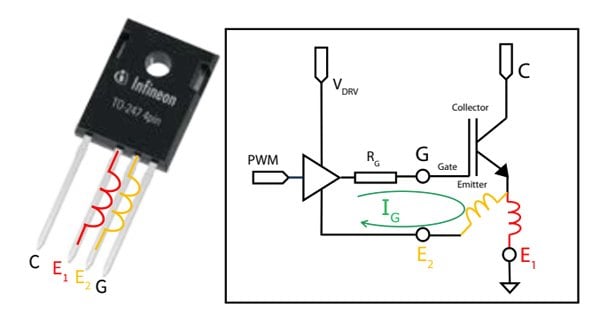 Another difference from the TO-247 4 package is the pin-out, which is different from the standard TO-247 3. This is done to keep the creepage distance between the high voltage pins. In addition, the pins which are connected to the power loop, C and E1, are put side by side, so are those for the control loop E2 and G.

Without the attenuation of the gate voltage coming from the power emitter, the switching of the IGBT becomes faster than in the standard TO-247 package. To quantify the benefit of the Kelvin emitter configuration during turn-on, the IGBT IKZ50N65EH5 has been used as the device under test (DUT). It is a 50A rated IGBT from the TRENCHSTOP™ 5 family in a TO-247 4pin package. In the first set of tests, the emitter pins E1 and E2 have been connected. The output of the gate driver has been connected to pins G and E1. This emulates the standard TO-247 package and is referred to as 3pin configuration. In the second set, pins E1 and E2 have been connected as in Figure 2. This is referred to as 4pin configuration. A device available on the market with the same rated current inside a standard TO-247 package has been included for reference.

The total switching losses measured in the three tests is presented in Figure 3. The advantage of the Kelvin emitter configuration is more prominent for the highest currents. These are the conditions where highest current change rates are expected. Therefore, the lead inductance will attenuate the gate voltage the most in the 3pin configuration.

Figure 3: Total switching energy of an IKZ50N65EH5 in both, 3pin and 4pin configurations

Figure 4 presents the difference in switching energy between the 3pin and 4pin configurations as a function of the switching current. The benefit of the Kelvin emitter therefore can be quantified in absolute values so as in percentage to the standard 3pin configuration. 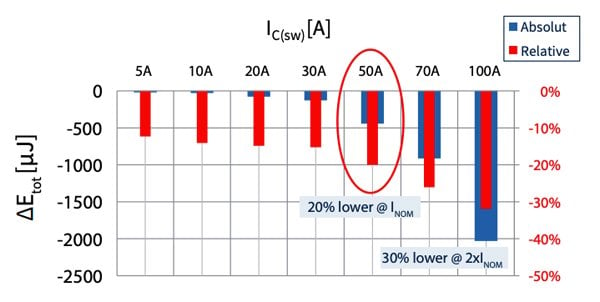 Figure 4: Switching energy reduction from 4pin configuration in both, absolute and relative values

From Figure 4, it is possible to deduce that in applications where the current is higher than the rated current of the IGBT, the switching loss reduction can be higher than 20%. This often is the case in Uninterruptable Power Supplies (UPS) and welding machines. For applications where the current is typically around half the IGBT’s current rating, like for example photovoltaic inverters or switch mode power supplies (SMPS), the benefit is slightly lower, i.e up to 15% lower switching losses.

Vladimir Scarpa was born in Uberlândia, Brazil, in 1980. He received the B.Sc. and M.Sc. degrees in electrical engineering from the Federal University of Uberlândia, Uberlândia, in 2003 and 2005, respectively. His research interests include power electronics applied to renewable energy sources and digital control of switching power supplies.

Fabio Brucchi works as a Principal Application Engineer at Infineon Technologies, Pavia Area, Italy. He is mainly focused on IGBT / Silicon Power Diodes, Chips and Discretes and is also skilled in the field of power electronics, design engineering and semiconductors. He earned his Diploma in Industrial Electronics at Max Plank. He also earned his certificate in Prince 2 - Project Management at APMG-International located in Wycombe, England. Finally, he earned his Diploma in Electrical Engineering at Sapienza University of Rome (Sapienza Università di Roma) located in Rome, Italy.