This article discusses IGBT7 Chip Technology and its benefits to variable-speed drive applications.

One major topic in drive applications is the limitation of switching speed due to the inherent limitation of the motor insulation system. Therefore, switching slopes (dv/dt) are restricted to the range of 2 to 10 kV/μs with a typical target of 5 kV/μs. Moreover, a motor overload is typically only required for a short time, e.g. to provide initial breakaway torque at start-up. These requirements are addressed by Infineon’s new 1200 V TRENCHSTOP™ IGBT7 and emitter-controlled diode EC7 technology. The IGBT7 is based on the latest micro-pattern trench technology (MPT) [2] and offers a significantly reduced on-state loss compared to IGBT4. A high level of controllability is provided as well as operation at 175 °C under short-term overload conditions.

The key benefits include:

The IGBT7 cell concept is characterized by the implementation of stripe-patterned trench cells separated by sub-micron mesas [2], in contrast to the formerly used square trench cells. Figure 1 shows a schematic drawing of an MPT structure with possible trench designs. 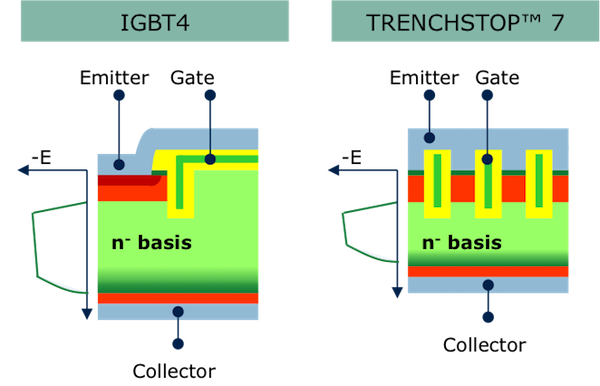 For trench cells with smaller cell pitches and narrow mesas between gate areas, the carrier storage close to the emitter electrode increases considerably. Therefore, there is a significant increase in electrical conductivity in the drift zone, which leads to a substantial reduction in forward voltage.

Compared to the last IGBT4 generation, IGBT7 shows almost the same turn-off losses while making a big step in the reduction of static losses. Its on-state voltage is reduced by around 20% compared to the IGBT4 T4 chip. A typical value is 1.65 V at Tvj=125°C. This brings significant loss reduction in the final application, especially for industrial drives applications which usually operate at moderate switching frequency.

For this purpose, the TRENCHSTOP IGBT7 offers a high level of controllability. The controllability corresponds to the device’s ability to vary the dv/dt by adjustment of the value of the gate resistor (RG). This, in turn, will affect the total switching losses (Etot) [3]. The TRENCHSTOP IGBT7 is inherently optimized for typical dv/dt values around 5 kV/μs. In the TRENCHSTOP IGBT7 data sheets, the dv/dt values and switching losses are provided in dependency of the external gate resistance RG [4]. The turn-on dv/dt curve is specified at 10% nominal current and room temperature, the turn-off curve at nominal current and room temperature. It should be noted that the dv/dt level, especially the turn-on dv/dt, is not absolute, but are also dependent on the final test setup.

As an example, Figure 2 depicts the dv/dt of the IGBT as a function of gate resistance RG for the 100A module FS100R12W2T7. At nominal RG of 1.8 Ω, the turn-off dv/dt is already below 5 kV/μs, and turn-on dv/dt is very close to this limit. Figure 2 indicates the gate resistance values if a dv/dt of 4 kV/μs is required. 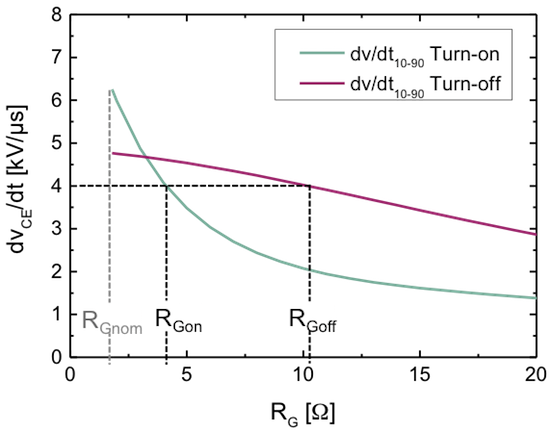 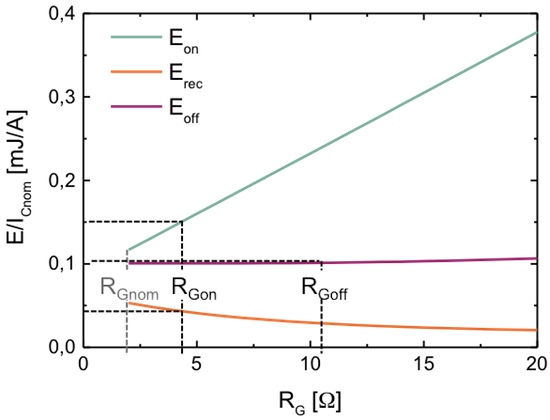 Reducing Power Losses with the IGBT7

An important design target was to reduce the power losses while increasing the power density significantly [3]. This enables the end user to build more efficient and reliable power electronic systems.

The power losses of the inverter stage for two power modules rated at 25 A were simulated for typical application conditions as given in Table 1. As can be seen in Figure 4, the switching losses at the given dv/dt limitation are similar but the conduction losses are significantly decreased. Moreover, there is a reduction in diode losses. All in all, this results in 15% lower power losses.

Not only lower power losses, but also increased power density and higher operating temperature are major system benefits of the IGBT7. Typically, drive manufacturers offer several motor power classes in one mechanical frame size. Due to its higher power density, the TRENCHSTOP IGBT7 enables an extension of existing frame sizes. 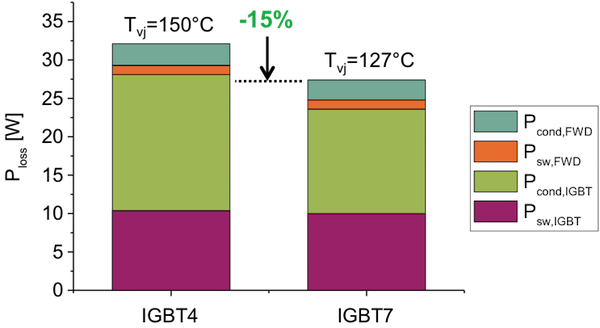 In the following section an example for the application of General Purpose Drives (GPD) is given. The focus is on the increase of power density resulting in a reduction of system cost. This can be achieved by using a 40% smaller power module, the Easy1B instead of the Easy2B. Simulations of junction temperatures were run under overload conditions assuming the industry’s normal-duty (ND) and heavy-duty (HD) operating conditions for a motor power class of 7.5 kW (ND) and 5.5 kW (HD) [4].

Under both conditions, the IGBT7 in the Easy1B package can be used. Above that the cooling effort can be reduced due to the higher operating temperature. Figure 5 shows one example for the ND load profile where an overload of 150% for 3s and 110% for 60s and a base load output current of 17.8 A have been assumed. The junction temperature Tvjop is given in dependency to the thermal resistance of the heatsink RthHA (per switch). For the same RthHA the IGBT7 can be operated at a lower temperature. Alternatively, utilizing the higher operating temperature of 175°C, a higher value of RthHA can be accepted which goes along with a less complex heatsink (e.g. standard extrusion) or less powerful fan. 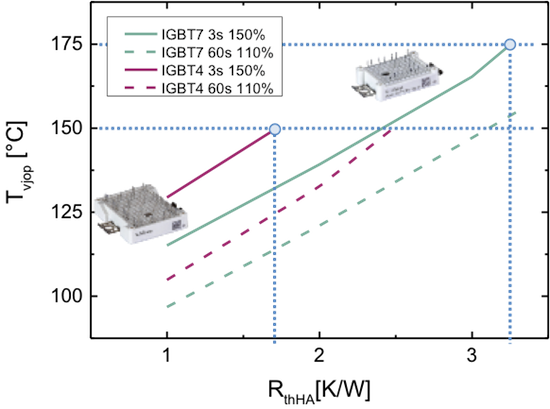 The investigations comparing IGBT4 and IGBT7 have shown the significant benefits of IGBT7 especially for variable-speed drive applications. The simulation results of IGBT7 in the Easy 1B & Easy 2B package show the potential of significantly higher power density than with IGBT4. This is because IGBT7 can offer the same current rating but in a smaller package. In addition, IGBT7 has been optimized for operation at a dv/dt level of 5 kV/μs to meet the requirements of motor-insulation systems.

Uwe Jansen is a graduate from RWTH Aachen University and is currently working as a Principal Application Engineer at Infineon Technologies since August 2003.

Max Seifert is a Physicist from the Technical University of Munich with a focus on semiconductor physics. He has already achieved 11 publications through-out his career. Currently, he is working as the Project Manager at Infineon Technologies since November 2015.

Christian Muller holds a Dipl. -Ing. in Electrical Engineering at Giessen-Friedberg University of Applied Sciences. He currently works as a Senior Staff Engineer at Infineon Technologies since February 2012.

Christian Jaeger holds a Diploma in Physics at the Technical University of Munich. He also studied Business Administration at the University of Hagen. He worked as the Project Manager for Chip Development and now currently works as the Senior Manager for Technology and Device Development – Automotive High Power at Infineon Technologies since January 2020.