This article offers a highly integrated solution of improving inverter protection with the use of Toshiba's TLP5214 smart gate-driver.

Additional protection is needed to prevent short-circuit currents from damaging the power transistors (Figure 1), which can add significantly to the overall size of the inverter.

Alternatively, integrating suitable protection within the photocoupler itself, to create a smart driver, enables a more space-efficient solution and also provides optimized protection that can be difficult to design using discrete components. An isolated feedback path for fault indication can also be integrated, resulting in a smart coupler/driver that saves component count and board space and also enhances system reliability.

The IGBTs of the inverter bridge can be exposed to excessive currents in the event of a short circuit at the load caused by incorrect connection or by a fault such as failure of the winding insulation in a motor-control application. Other causes of short-circuit current include unwanted transistor turn-on, resulting in both upper and lower arms in the same phase of the bridge conducting at the same time. This can be caused by noisy circuit conditions, or by the action of the parasitic Miller capacitance CCG between the IGBT gate and collector.

In the event of a short circuit, the over-current must be detected and the transistor turned OFF within the short-circuit withstand time stated by the IGBT manufacturer. This is typically 10µs. Moreover, a soft turn-OFF of the device is desirable, since a rapid change in collector current can induce a large collector-emitter voltage exceeding the rated breakdown voltage.

It is possible to use current transformers to sense current flowing at strategic points in the system. This provides a means of feeding back current information to the controller without requiring additional isolation. However, the current transformers themselves are physically large and may be too bulky for today’s applications. On the other hand, a current-sense resistor may be used. Although the resistor can be small, I2R losses can be high, and additional isolation is required.

Alternatively, using the DESAT pin together with a high-voltage diode to monitor the saturation voltage VCE(sat) as the IGBT incurs low power loss and also allows the protection function to be implemented on the IGBT side, resulting in a fast response. In addition, it is relatively inexpensive.

Figure 2 shows the external components needed to implement a VCE(sat) monitor using a general-purpose driver coupler such as the Toshiba TLP352. The VCE(sat) voltage is monitored. The controller generates a gate signal that turns the IGBT OFF softly when an over-current is detected. Also, a 1 Mbps-class high-speed coupler is used to transmit fault signals to the controller. 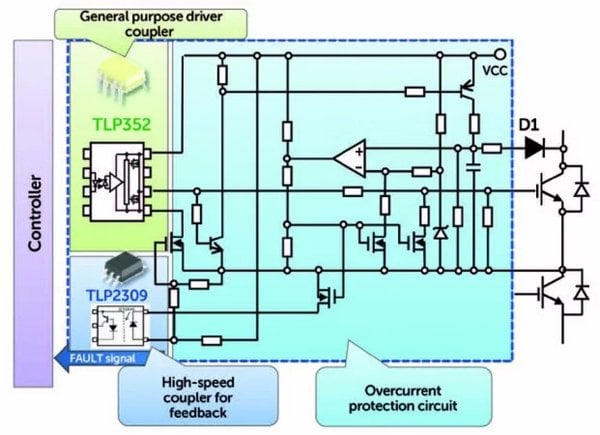 By integrating the external VCE(sat)-monitoring circuitry and feedback coupler in the same package as the isolated gate-driver, a significant saving in PCB size and circuit complexity can be achieved.

The TLP5214 smart gate driver monitors the IGBT Vce at the DESAT pin through the external diode DDESAT, as shown in Figure 3. When the IGBT is conducting normally, VCE becomes the saturation voltage VCE(sat) (under about 2V). When over-current occurs the device desaturates and VCE(sat) rises.

When VCE(sat) rises above 6.5V as it is in saturated level, the TLP5214 generates a soft turn-off signal at VOUT to protect the IGBT and at the same time transmits a fault signal to the controller using the 1 Mbps-class high-speed coupler which is also integrated. Vout shutdown begins within 700ns, thereby providing fast-acting protection. In the conventional circuit of Figure 2, the fault signal must be fed back to the controller: hence a few microseconds typically pass before the driver output begins to turn OFF the IGBT.

The TLP5214 also integrates an active Miller clamp to prevent unwanted IGBT turn-ON causing a short circuit through the upper and lower arms of the bridge.

The IGBT’s parasitic Miller capacitance, CCG, can cause the IGBT in the lower arm of the bridge to turn ON when the upper IGBT turns ON. This happens because turning on the upper IGBT causes the VCE of the lower IGBT to rise sharply, causing a displacement current, IS, equivalent to CCG x (dVCG/dt) to flow in the direction of the photocouplers output. As the current passes through the gate resistor RG of the circuit, the voltage drops and the gate voltage rises, generating a false ON condition of the IGBT, which induces a short circuit in the upper/lower arms.

This unwanted turn-ON can be prevented using a negative power source, which requires additional power circuitry. A less expensive solution is to use a lower gate resistance, although this may increase switching noise, and the amount by which the resistance can be reduced is limited.

The active Miller clamp provides a more satisfactory solution by creating a short circuit between the gate and emitter of the lower IGBT. However, configuring a suitable circuit using external components is complicated and requires additional board space, as seen in Figure 2.

The TLP5214 has an internal active Miller clamp that eliminates the need for external clamping components. The Miller-clamp pin, VCLAMP, shown in Figure 3, is connected to the gate of the IGBT. When the output of the photocoupler switches from high to low, the gate voltage falls below around 3V and the MOSFET between the VCLAMP and VEE pins turns on thereby clamping the gate to emitter voltage (VEE). This causes the Miller current to bypass to the emitter from the VCLAMP pin, thereby suppressing voltage rise at the gate and so preventing short circuits on the upper/lower arms.