Getting the Most Out of a DC/DC Converter

Getting the Most Out of a DC/DC Converter

This article discusses the Modular DC-DC converters and their recent developments in terms of power density.

Small isolated DC/DC converter modules have been used for decades to efficiently match the supply voltage requirement of a load to the available power rail, to provide low-power auxiliary voltages such as a negative rail for an analog interface, for safety isolation or just to break ground loops for a particularly sensitive area of circuitry. As modules, through-hole single in-line pins (SIP) versions have been popular and the earliest boasted around a Watt of unregulated power output in a compact SIP-7 format, plenty enough power for many of the applications mentioned. Over the years, power density has steadily increased with unregulated 3W now available in the even smaller SIP-4 format (Figure 1).

Fully regulated parts soon appeared, initially using a self-oscillating, variable frequency flyback circuit for minimal component count, but the latest versions are typically fixed frequency IC-based for optimum efficiency over a wider load range, giving high power density, 4:1 input range and features such as output trim and ON/OFF control. 2W in a DIP24 package was the initial benchmark, but soon SIP7 and SIP8 2W, 3W and 6W versions appeared and now the 12W benchmark has been reached (Figure 1). As power levels have increased, the modules are increasingly used for powering entire sub-systems and even whole products, rather than being used as just an auxiliary power supply. As the main power conversion stage, agency-rated isolation becomes more important and as SIP7 or SIP8 packages allow meaningful creepage and clearance between input and output pins, so a trend has been to increase power from these packages rather than to shrink module size keeping the same power.

As vendors have introduced more SIP8 DC/DC modules with improved power density, some have resorted to optimistic claims just to appear to keep up with the industry leaders. The headline power may only be available with heavy derating – for example, a nominal 9W part may well be able to deliver full power if case temperature is held to an impractically low temperature, if the load duty cycle is low or if significant forced air cooling is applied, but the useful power may be much less. For example, the 6W part from RECOM delivers more power at +75°C ambient with convection cooling than the nominal 9W part from the competition.

Such discrepancies, where a nominal lower power part delivers more useful power than a nominal higher power part in real-life situations, is an indication that the existing design topology has reached its limits. It may be possible to further increase the power density by using more expensive components, but a radical redesign is necessary to jump up to the next power level, for example abandoning the inefficient bobbin transformer construction and using a fully planar design. This is the approach used in the new RS12-Z series from RECOM [1]. Planar transformers use PCB tracks for the windings which are technically challenging with multilayer PCBs necessary, often with blind and buried vias. Additionally, achieving guaranteed isolation (3kVDC in the case of the RS12-Z) requires careful design of the PCB stack-up. Finally, for every input out voltage combination, a different PCB layout is required with different turns ratios, so the manufacturing process is more complex. Planar transformers do however take the labour out of the assembly process and give very repeatable performance compared with traditional wire-wound transformers. Along with the improvements in efficiency, the advanced thermal management enables the full 12W output at 75°C ambient across the 4:1 input range. In this product, the heat generated in the converter is efficiently transferred to the metal case with low thermal resistance. Tinned case tabs are used to additionally lead heat away into the host PCB.

A bonus that appears with advanced IC-based converter circuits is the extra functionality available, solving some important problems. For example, as the main subsystem or product power source, the converter should operate in a well-behaved way when the input supply drops, typically from a discharging battery. Regulated switched-mode converters take constant power from their input for a constant load so if the input voltage drops, current increases. If the converter continues to operate below the minimum rated input voltage, the increased current can be damaging, so an under-voltage lockout function is necessary which is built-in to many control ICs. The function also ensures that the converter output switches off cleanly at a set minimum input voltage.

Another feature available from circuits such as used in the RS12-Z product is a ‘control’ pin or ON/OFF function. This can be used to put the converter into a ‘sleep’ mode for minimum power consumption and extended battery life if used as an input supply. The function can also be used to delay or ‘sequence’ the converter output with other power rails. Control can be purely ‘primary-side’ or derived from isolated outputs via optocouplers. Figure 2, as an example, shows an arrangement of converters where DC/DC 2 is enabled after DC/DC 1 is powered with a fixed delay set by R1/C1 but DC/DC 3 is enabled only when DC/DC 2 output is within tolerance. 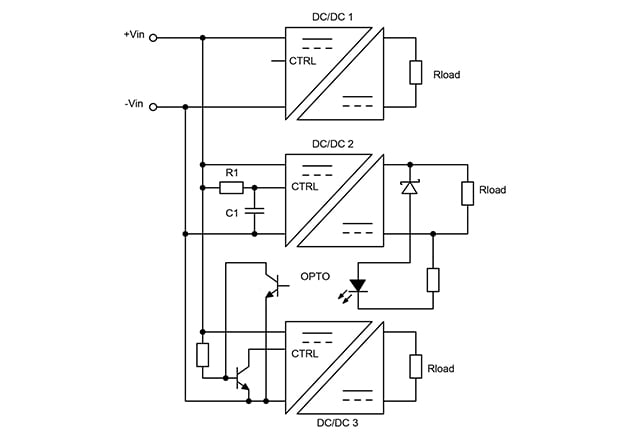 Trim Pins can Have Multi-functions

A trim feature is also useful to adjust a DC/DC output to compensate for external voltage drops. A typical use would be with converters paralleled for redundancy where output series diodes are inserted to prevent failure of one DC/DC affecting the other, Figure 3 for example. In this case, with Schottky diodes, each output may be trimmed up by about 0.3V via R1 and R2 so that the ‘gated’ supply is the correct nominal, 3.3V in this case. Note that converters are typically rated for a maximum power output so if the output is trimmed up, the rated current should be reduced. 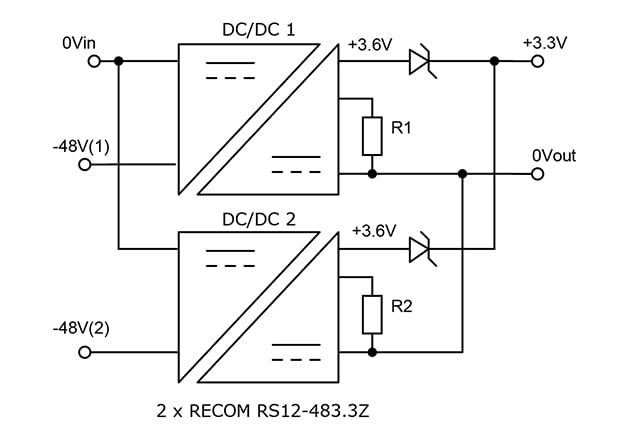 Figure 3: DC/DC outputs trimmed up to compensate for diode drops in redundant configuration.

A trim pin can also typically be controlled by an external voltage allowing other functions; one example is where a power rail is needed in a production ATE system which cycles between its allowed tolerances to achieve a ‘margining’ function, to test resilience to power supply variations. The circuit of Figure 4 achieves this and comprises a sinewave oscillator IC1 which couples to the trim pin of a RECOM RS12-Z DC/DC converter with a set DC-offset to match the trim pin nominal voltage. VR1 controls the amplitude of the variation, IC2 sums this with a negative fixed offset producing a positive offset on the trim pin with a sinusoid superimposed. 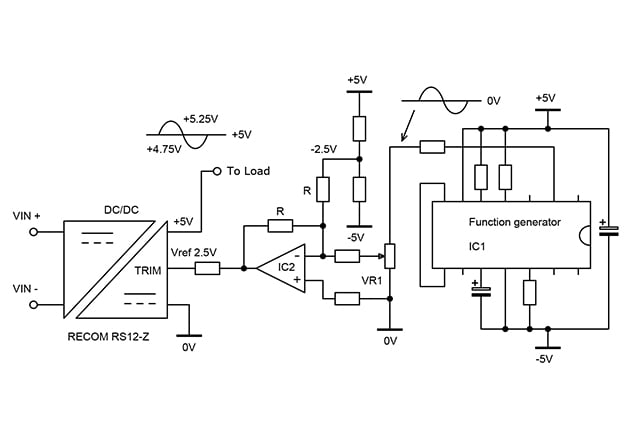 With other external circuitry, the trim pin could also be used to implement a remote sense function or to control power-sharing if the current is sensed externally to the converters.

DC/DC EMI Filters Should be Compact

When used as the main power source for low power equipment, a DC/DC will itself be powered from an external supply and may have to meet particular EMC specifications, typically EN 55032, either Class A or Class B limits. To achieve this, particularly noisy or variable frequency converters may need additional filter components that can occupy more board space than the converter itself. Typical filter circuits are shown in Figure 5 that enable the RECOM RS12-Z converters to meet the two limits, in this case with a combination of small electrolytic and ceramic capacitors, and low-value inductors.

Figure 5: Typical DC/DC EMI filters for EN 55032 Class A and B compliance.

Modular DC/DC converters have evolved significantly since their first introduction. Power density has increased dramatically but so has functionality allowing them to be used as precision power sources for modern electronic systems. The RECOM RS12-Z series is a good example, an innovative new design suitable for nominal 12, 24 or 48V DC inputs with a range of outputs delivering a full 12W at 75°C.

Steve Roberts was born in England and received a B.Sc. in physics and electronics at Brunel University, London, before working at University College Hospital. He later moved to the Science Museum as Head of Interactives, where he completed his M.Sc. graduated from University College in London. Eighteen years ago, he made his personal Brexit and moved to Austria, where he became the technical director of the RECOM group in Gmunden. Roberts is the author of the DC / DC & AC / DC Book of Knowledge.

Axel Stangl has worked as the Product Manager at RUTRONIK Electronics Worldwide since July of 2000.