When designing a power supply, the first step is finding the right topology. This is usually followed by calculating average and peak values for voltages

When designing a power supply, the first step is finding the right topology. This is usually followed by calculating average and peak values for voltages and currents of the circuit’s components. Only then can the design engineer know the ratings for the components he or she has to pick for the power supply solution.

This whole design process can be quite tedious if you have to do calculations manually or wait for simulations to finish. Afterward, it might even take another round of calculating and simulating with a different topology to find the optimal solution for meeting your target power supply specification.

TI’s Power Stage Designer is Java-based and is a mighty tool to help engineers design the power stage of their switch-mode power supply (SMPS) very quickly. The tool includes 16 of the most common hard switched power supply topologies and the Phase Shifted Full Bridge. Power Stage Designer provides the user with all important design parameters. Waveforms for all components of the power stage will be visible to the designer after clicking on their symbol. No SPICE simulation is needed for this. After changing the input parameters, the new results will immediately be available. Besides the diode forward voltage drop, no other parasitic effects are considered for the equations. Thus, the results are more or less ideal. With a slider in the graphs panel, the user can step through the entire input voltage range and look at the change in waveforms and calculated data. 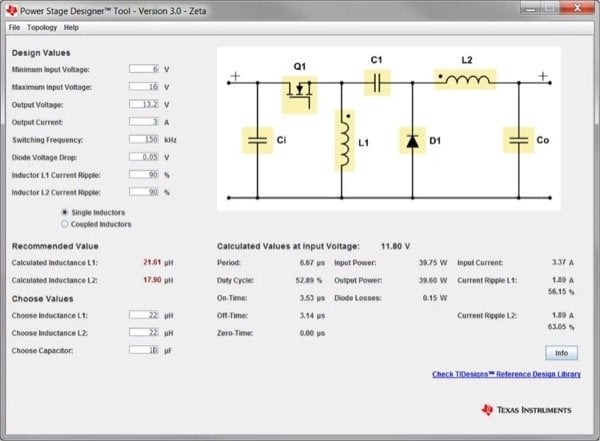 Figure 1: In the main window of each topology general data for the design is displayed

Another great benefit of this tool is that it allows both students and experienced engineers to familiarize themselves with rather unknown power supply topologies. Because the waveforms of all components’ voltages and currents can be examined, it is a lot easier to understand how the power transfer works with less well-known topologies. The tool also enables the user to compare different topologies and pick the most fitting for his or her power supply solution. With the exception of synchronous buck, Weinberg and Phase-Shifted Full Bridge, which are only available in Continuous Conduction Mode (CCM,) all other topologies support operation in Discontinuous Conduction Mode (DCM). In the main window, general information is provided. For each component, a set of important values is displayed in the graphs window under the respective waveform: Minimum and maximum voltage, minimum and maximum current as well as average, rms and ac currents. Those parameters have to be known before choosing the actual components for a SMPS design.

With the slider for the input voltage in the graphs panel, users have the possibility to reproduce the transition between DCM and CCM, if the inductor value is chosen in the appropriate range. This feature also allows users to observe the difference in behavior of the circuit like increasing peak and rms current, when using a smaller but cheaper inductor, which is common practice for low-power Flyback designs.

Figure 2: The graph panel shows voltage and current waveforms for a single component as well as important design parameters.

In Power Stage Designer 3.0, voltage and current waveforms for input and output capacitors have been added for each topology to help designers estimate the AC current stress in those components. This is important for choosing the correct type and also a sufficient number of capacitors for the design to ensure appropriate current stress.

Besides these minor improvements have been made to the user interface. The chosen input voltage is now displayed both in the main window and the graphs window, as it is important to show the exact value at all times. Additionally, a slider for choosing a specific input voltage has been added to the graphs window. The whole input voltage range can be successively displayed while looking at the waveforms and the component’s key parameters. The slider can also be moved by the keyboard’s arrow keys, while the graphs window is active. For convenient control, keyboard shortcuts are available for selecting minimum, average and maximum input voltage (this was used in Power Stage Designer 2.1) both when the main window or the graphs window is active. Keyboard shortcut CTRL+1 sets the slider to the minimum, CTRL+2 to the average and CTRL+3 to the maximum input voltage. The current ripple of inductors and for certain topologies, the magnetization current, are now provided both as absolute and as relative values in the topology’s main window.

SEPIC, Cuk and ZETA topologies contain two inductors in the circuit. Because of that, the option to choose between single or coupled inductors has been implemented. Coupled inductors will have half the inductance compared to single inductors for the same ripple requirements. Additionally, those topologies do not need an additional RC-network for attenuating the effect of the resonant frequency, when coupled inductors are used.

For experienced designers, the right half plane zero (RHPZ) frequency has been added to the main window of Boost, Inverting Buck-Boost, SEPIC, Cuk, Flyback and Two Switch Flyback converters in Power Stage Designer 3.0. The equations used have been simplified, thus the result is a rough estimation but it is quite helpful for the control loop design, which will follow after the design of the power stage.

After finishing the design process with Power Stage Designer there are a couple of options to proceed: The user can print the design and choose how much information to print. Another way to store design parameters with Power Stage Designer 3.0 is to save user inputs in a text file. The data stored in the save file can be recalled with the tool when needed again. Besides this, it is also possible to transfer the input data to TI’s website and search for pre-built and tested TIDesigns. TIDesigns provide the designer with schematic, BOM, layout files and test report, which can effectively minimize the time spent for the design process. The last option is to start a Webench® design from Power Stage Designer with the chosen inputs for Buck, Boost, Inverting Buck-Boost, Flyback, and Sepic converters. Webench® will propose possible solutions with different power controllers, converters and modules. The user can proceed with comparing the different solutions regarding size, cost and efficiency to optimize the design.

Markus Zehendner is a Systems Applications Engineer in TI’s EMEA Power Supply Design Services Group since 2014. He holds a Bachelor in Electrical Engineering and a Master in Electrical and Microsystems Engineering from the Technical University of Applied Sciences in Regensburg. His design activity includes reference designs of isolated and non-isolated DC/DC converters for all application segments.