This article highlights the importance of the highest possible reliability of the components in motor control used in space applications.

In space applications, the highest reliability possible is needed, as repair or rework is impractical after a satellite is launched. By controlling motors digitally, sophisticated fault detection, isolation and recovery algorithms can be implemented to prolong the useful life of motors, and therefore maximize the service life of the satellite. Furthermore, digital control allows the collection of telemetry data on motor performance and subsequent transmission to the satellite control station on earth. With digital control, power-efficient motor control algorithms can be deployed to minimize the consumption of power generated by the satellite’s solar panels or stored in its batteries. Resources are extremely limited in outer space, and power conservation along with fault protection should both top the list of priorities of a spacecraft.

Cosmic radiation in space is a well-documented problem that poses a threat to the ASICs and FPGAs where digital control is implemented, and a corruption of the control data can render the entire system inoperable. Dealing with the effects of cosmic radiation on spacecraft is an important and complex process. Single-event effects, such as latch-ups and single-event upsets, can damage spacecraft electronics severely and suddenly, while total ionizing dose (or TID) exposure accumulates over time, gradually causing electronic devices to exceed specified limits. Flight-critical and mission-critical systems need to be designed with components that have well-established and well-documented tolerance to radiation effects.

Although reliable processes and technologies are clear necessities for components in spaceflight applications, they are simply not enough. Reliability screening on a per-part basis is needed to screen out manufacturing defects and to eliminate early failures, sometimes called infant mortalities. Ensuring that each component of a satellite’s digital control system is up to industry standards is just as imperative as the component’s function itself. Implementing a system that is designed to be more efficient and more durable is great, but ultimately ineffective unless it operates reliably throughout the entire intended lifetime of the mission. This is the primary purpose of the quality standards adopted and implemented by the space industry, and this is why it is important to thoroughly test each part in accordance with those standards.

A component failing in space could jeopardize the mission of a satellite that costs billions of dollars, decades of effort, or could even cost a human life, which is why the qualifications for parts are the toughest and the tests require the most scrutiny. In this way, qualification to QML criteria provides assurance to satellite operators who are committing $100M-$1B (per satellite) that the parts they are using have been assessed by industry experts to be sufficiently reliable for flight-critical and life-critical space applications. If they are putting that much money and effort into their project and risking human lives in their endeavors, they can take their qualifications as a form of security for their investment.

However, in order for customers to put themselves through such strenuous qualification processes and invest so much into new forms of digital control, these systems must provide some clear advantage. So going back to the original solution: what exactly does power-efficient digital motor control look like?

Sensorless field-oriented control (FOC) theory is one that is commonly applied in controlling basic permanent magnet synchronous motors (PMSMs) and brushless DC motors (BLDCs) using an FPGA and is known for its precise, sensorless control while optimizing the use of control resources. The FOC system is composed of several algorithm blocks, each providing various control and feedback monitoring functions. Digital control systems communicate with the motors through voltage and current signals, and these algorithm blocks are instrumental in translating the necessary messages. FOC transformation blocks are there to ensure optimum usage of resources; open-loop management blocks can calculate the position and speed of the motors; the rate limiter block programs a smooth transition as the motor changes speed, and there are a host of other blocks that perform a variety of other critical actions.

Additionally, these blocks can often serve multiple functions for fault detection and reset purposes. The open-loop management blocks not only track motor position and speed but also monitor the back emf from the motor, which can then be communicated to the rate limiter as motor feedback. The rate limiter can use this data to force the control output to zero instantaneously for an auto-restart if there is an irregularity in the back-EMF caused by an unknown exterior braking force, for example. From facilitating feedback from various position and speed sensors; to enabling precise control of motor speed over a wide range of speeds; and even detecting stall and overcurrent conditions, these algorithms employed in digital motor control structures provide such a versatile set of functions. Functions that will, in the end, increase the reliability of satellites, protecting the motors and saving precious power. This is the way of the future in motor control, and some modern radiation-tolerant FPGAs can successfully tackle these challenges while having the added ability to mitigate radiation effects. 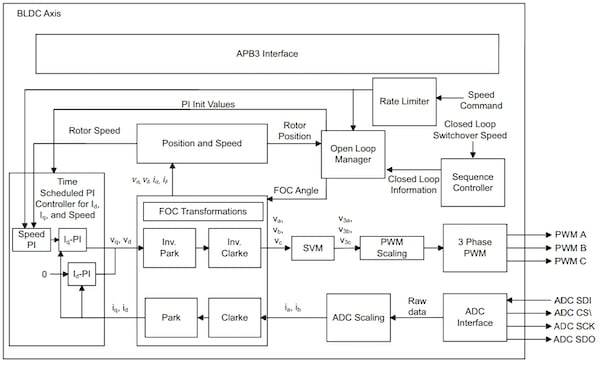 Figure 1: Block diagram of FOC sensorless implementation to control the speed and torque of a BLDC motor

The latest industry FPGAs are paving the way into this future, and feature all of the IP required for sensorless FOC motor control, with the benefit of having radiation-hardened circuitry hardwired directly into their architecture. With up over 100k triple-modular redundant flip-flops; several Mb of internal storage; radiation-hardened configuration memory; and an abundance of math blocks, user I/Os, and SERDES lanes operating at multiple Gbps, these solutions are designed to handle complex tasks in space, such as digital motor control. Development kits are also readily available on the market in support of the newest FPGAs, which allow designers to run custom tests and interface to a host PC.

Testing with the RTG4

A benchmark test was performed using Microsemi’s Motor Control Kit, in conjunction with the RTG4 development kit, where sensorless FOC algorithms were implemented to run 4 motors simultaneously and independently. The RTG4 was found to consume only 0.6 W in the average case, and 1.8 W in a worst-case scenario. Its power efficiency was similarly matched by its resource efficiency, only requiring a 13% resource usage. During the motor control simulation, only 19,000 4-input look-up tables and 19,000 D flip-flops were required, which equates to 12.9% and 12.6% of the RTG4 FPGA resources respectively. 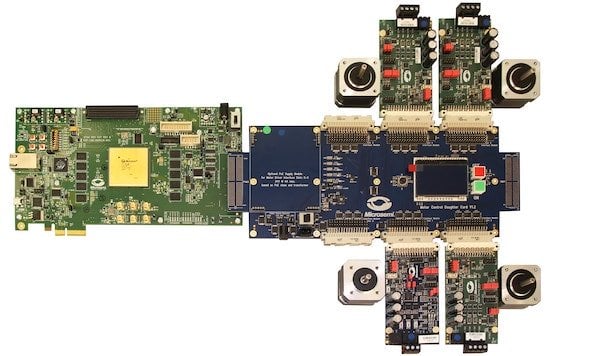 Shifting from the design input to the motor output, the maximum motor performance saw speeds of over 5500 rpm for all four of them simultaneously running motors with an input clock frequency of 73 MHz. There were four independently controlled motors in the bench test setup, however, the design can be easily expanded to six motors or more. Looking at the overall test results, benchmark testing has demonstrated that the RTG4 is successful in dealing with the multi-dimensional task of providing a low-power, radiation-safe, and efficient part for space applications. Furthermore, providing a platform for design engineers, like the RTG4 Motor Control Kit, to experiment and calibrate their own constraints can be invaluable to short-term and long-term space missions, especially with such exciting technology entering the market with such untapped potential.

Digital motor control is a clear path to the highest potential reliability in space applications. Its utilization leads to new levels of conservation of power, while the added countermeasures embedded in the fabric of the algorithms provide increased protection for the motors and satellite instruments. But recall that it is not enough to protect the elements under digital control; having radiation-tolerant digital electronics and FPGAs are equally needed for a completely reliable spacecraft. Radiation mitigation in digital space electronics, as well as proper screening qualifications, will ensure that the control center executing the algorithms is protected and can be supported by industry documents.

Truman Tai is an experienced Consultant with a demonstrated history of working in the computer software industry. Skilled in Data Manipulation, Web Editing, Quick Grasping, Programming, and Public Speaking. Strong consulting professional with a Bachelor of Applied Science (B.A.Sc.) focused in Engineering Science from University of Toronto.