An Introduction to Electrical Load Emulators

An Introduction to Electrical Load Emulators

There are different ways to emulate electrical loads. One of the most prominent ways is to use power electronic converters. Read on to learn more about what an electrical load emulator is and how it works.

Emulation is the ability of an electric device to imitate the behavior of another device or computer program. A load emulator is a system that functions as a controllable source or sink. It is capable of bidirectional power exchange with either a grid or another power electronic system. Loads can be machines like induction motors, permanent magnet synchronous motors, and the like. It also comprises the associated mechanical load and complex machine systems.

An Overview of Electrical Load Emulators

The concept of electrical load emulation involves the controlling of a power electronic converter such that the behavior resembles that of an actual electrical load. For example, a voltage source inverter (VSI) can emulate an induction machine [1]. The use of a load emulator is essential in different scenarios. It helps analyze the feasibility of connecting several machines to a grid under various load conditions and environments. The best part is that this can be accomplished without any electromechanical machinery. A load emulator can provide load characteristics to validate control algorithms and inverter design. Thus, this serves as a more flexible platform to verify inverters in a laboratory setting.

An unbalanced three-phase four-wire load setup can be implemented using a voltage source inverter (VSI) followed by an LCL filter [2]. The load is capable of absorbing as well as supplying power. The emulator is studied for different load conditions under fluctuating voltage levels, and the capability of the regeneration to supply the power back to the converter is also validated. The controller can then be tuned under different conditions to inject the desired reference current value depending on the nature of these loads. In general, linear controllers like PI and PID are not very effective in controlling non-linear loads which are driven by electric drives and used in most industrial processes [3]. To fill this gap, adaptive, robust, and intelligent nonlinear control methods need to be incorporated to design a suitable controller, and this is possible only using accurate nonlinear load emulators.

Working Off an Electrical Load Emulator 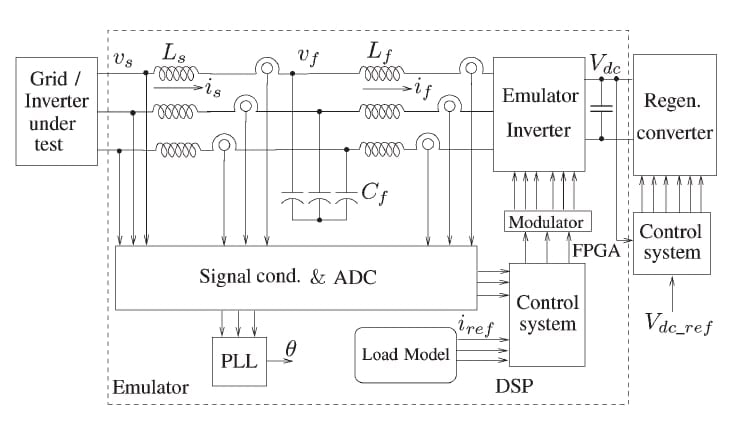 The presented load emulator configuration has a three-phase grid or three-phase voltage source inverter (VSI) as the power supply. The phase angle of power supply voltages is crucial for accurate operation and is tracked using the phase-locked loop (PLL) method. Three-phase voltages of the power supply serve as inputs to the PLL and produce a sinusoidal signal of the same frequency as the frequency of the power supplies. Load emulation is implemented such that the vital algorithm generates the desired currents to be drawn to mimic the actual load and serves as the main component of the system. The control system then ensures that the VSI draws or supplies currents close to the desired current references.

Since the load emulator VSI mimics the behavior of the electrical load, it would have to draw or source active power as per the load characteristics. To accomplish the same, the VSI is connected to the power supply through the LCL filter, which serves as an interface impedance. The emulator interface with an LCL filter is illustrated in Figure 2.

To accomplish sourcing and sinking of power, back-to-back VSI topology is illustrated in Figure 1, where one serves as the reverse power flow converter with respect to the other. Two controllers are necessary to fulfill the required system behavior, and the reverse power flow converter is controlled in current control mode to ensure bidirectional power flow while maintaining the constant voltage at the dc-link between these back-to-back converters. The main VSI is controlled through an optimal control strategy, and the optimal feedback controller used is a linear quadratic regulator (LQR).