Advantages of the 1200 V SiC Schottky Diode with MPS Design

Advantages of the 1200 V SiC Schottky Diode with MPS Design

This article describes how consistent innovations in device design and assembly techniques improve performance, reliability and cost position of diode.

A Silicon Carbide (SiC) Schottky diode has no real reverse recovery charge. Thus a hybrid set of 1200 V SiC diode and 1200 V Silicon (Si) IGBT enables simpler 2-level topologies by reducing the diode turn-off loss as well as dramatically lowering the turn-on loss of the Si IGBT. In this setup the static losses of the SiC diode often limit the optimization potential of Si IGBT/SiC diode solutions. To overcome this limitation, the new generation 5 diode from Infineon comes with a reduction of forward voltage and its temperature dependency to reduce static losses. This article describes how consistent innovations in device design and assembly techniques improve diode performance, reliability and cost position resulting in easier system implementation for efficient, reliable and robust inverter designs. 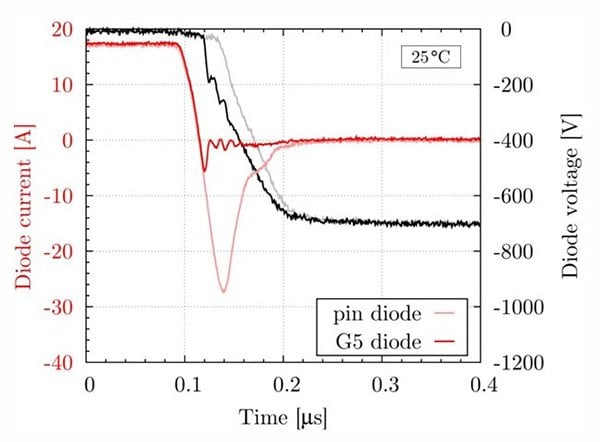 The new 1200 V SiC Schottky diodes implement a merged pn-Schottky (MPS) structure, representing the same technology base as the latest 650 V diode generation. To better understand this MPS design, the anode side of a SiC Schottky diode is shown in Figure 2. The blocking capability of a SiC diode during reverse voltage application is provided by a drift layer. This layer is also a major contributor to the overall resistance of the device. In this regard, it is best to lower the drift resistance to lower the forward voltage when the diode is conducting. A higher drift layer doping (n) lowers the resistance but at the expense of higher device leakage current.

The new diode with MPS design enables a 50 percent reduction of drift resistance compared to the previous Schottky design. In Figure 3 the corresponding forward voltage contributions at 600 A/cm2 are compared. Current densities of a final product are usually lower and mainly depend on the achievable thermal resistance Rth of the packaging vehicle. The reduction in drift resistance results in a mild increase in forward voltage with temperature. The forward voltage of generation 5 diodes only increases by 35 percent when the temperature is raised from 25 °C to 150 °C, significantly lower than the 60 percent increase in previous generation using Schottky design. 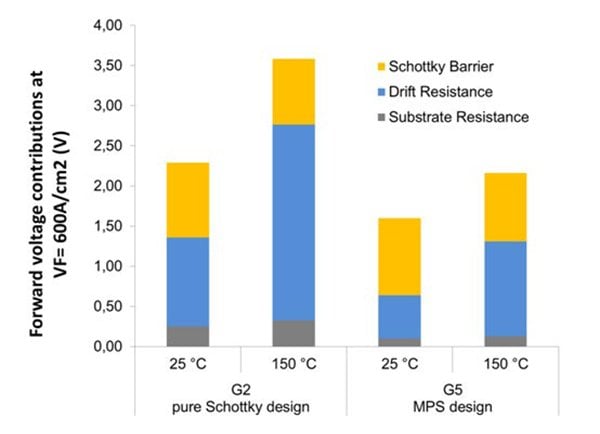 Figure 3: Comparisons of resistive contributions to forward voltage of a Schottky diode design and MPS design at junction temperatures 25 °C and 150 °C.

Another positive side effect of the MPS design is the increased surge current capability. At higher currents the build-in voltage of the p+ islands in n-junction is overcome and holes are injected into the drift layer. The diode becomes bipolar in terms of forward characteristics, as shown in Figure 4. Due to this design, Infineon’s generation 5 1200 V SiC Schottky diode is able to withstand surge current levels more than 15 times the nominal current for a typical 10 ms sine half-wave. 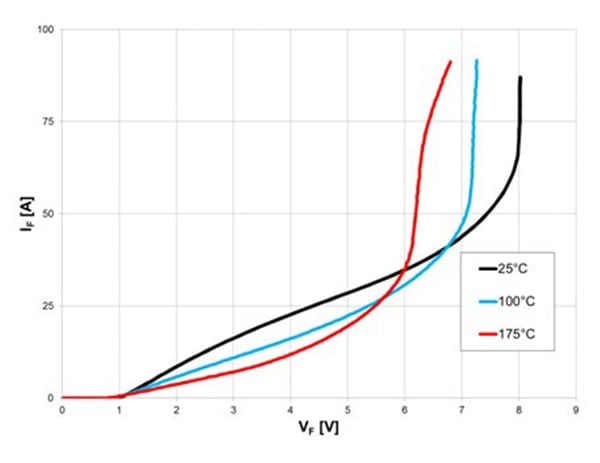 To provide mechanical stability to the semiconductor device, a substrate is used which is depicted in Figure 5 as a schematic cross section of a SiC Schottky diode. The substrate resistivity labeled as Rbulk is also a contributor to the diode’s total differential resistance. The thickness of this substrate has a direct impact on the forward voltage when the diode is conducting. It is therefore best to reduce this thickness to lower the forward voltage while considering mechanical stability.

The well-established thin wafer technology allows for the reduction of the substrate thickness to around one third compared to the original layout. With this thickness, the reduced total differential resistance leads to a 150 mV to 200 mV reduction of typical forward voltage for the identical chip sizes. 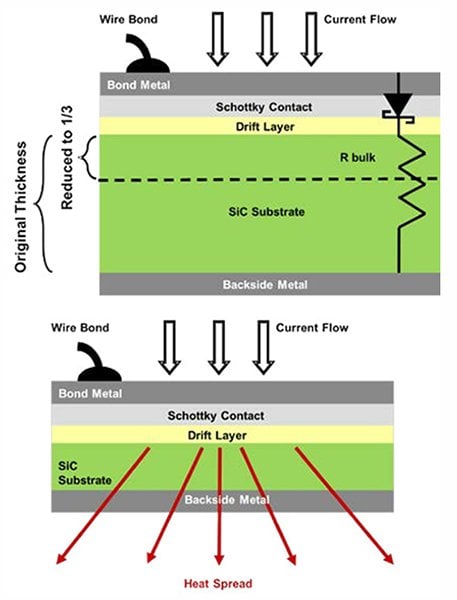 Figure 5: Schematic representation of a SiC Schottky diode indicating thick and thin wafers and showing the thermal path for the heat generated in the junction of the diode. Merged pn junction is not represented for simplicity.

Besides the reduction of the forward voltage, the reduced chip thickness also leads to an improved thermal resistance which, in return, is beneficial for the power dissipation of the device. Obviously, a thinner substrate layer offers a shorter thermal path for the heat generated inside the Schottky junction and drift layer of the diode. The heat spread from the junction is enhanced, thus reducing the thermal resistance between junction and the package lead-frame or case.

This holds true especially if sophisticated low Rth die attach techniques like diffusion soldering are used. In addition, the thin substrate enhances the propagation of the thermal flux not just only vertically but also laterally as shown in Figure 5b. The reduction in thermal resistance thus corresponds to an equivalent increase of power dissipation for the same case temperature. However, it has to be kept in mind that by wafer thinning the “junction-near” thermal capacitance (Cth) is reduced. Regarding short-time events like surge current there is a trade-off between the reduction of forward voltage drop and the reduction of Cth.

Experimental results in a boost topology

The performance of SiC and Si diodes was evaluated in a boost circuit. The test setup has an input voltage of 400 VDC and an output of 800 VDC capable of delivering 3000 W output power. IKW25N120H3, a 25 A 1200 V IGBT from Infineon is used as a boost switch switching at 20 kHz. A commercially available 18 A ultrafast Si diode commonly integrated for this output power range was used. The boost inductor has an inductance value of 2.5 mH. Figure 6 plots the efficiency curves and boost diode case temperature as a function of the output power for a 10 A SiC and 18 A Si diodes used as boost diode. The tests were performed at an ambient temperature of 25 °C. 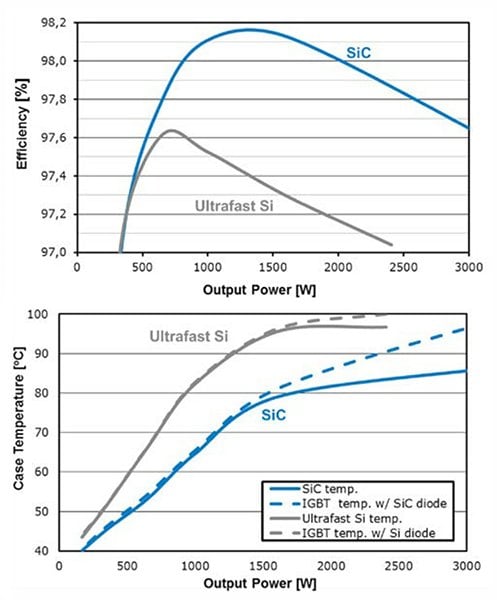 Figure 6: Efficiency results (top) of boost circuit and boost diode case temperature (bottom) of the 10 A SiC and 18 A Si diode over a maximum output power of 3000 W.

Figure 7: Efficiency (left) and SiC diode case temperature (right) results of a boost circuit with 800V output voltage, with Infineon’s generation 5 and generation 2 10A SiC Schottky diodes in TO-247.

Compared to a pure Si based solution design engineers gain a higher flexibility in system optimization for UPS, solar inverters, energy storage and other industrial applications when using hybrid Si IGBT/ SiC diode sets. The replacement of a Si by a SiC diode increases the system reliability because of lower device temperatures. Additionally, a higher output power in the same form factor can be achieved. By minor additional system changes, power density can be increased when using smaller heatsinks and EMI filters. The new generation 5 1200 V SiC Schottky diode from Infineon supports this higher flexibility with a low-loss turn-off, a dramatic improvement in static losses especially at elevated temperature and a massively increased surge current capability.