The overall system performance is undoubtedly influenced to a significant extent by the choice of the power semiconductor technology employed. For conventional IGBT modules, the recent improvements in the VCEsat vs. Eoff trade-off show a tendency towards saturation and hence the performance improvement of upcoming IGBT chip generations do not indicate a significant step in efficiency improvements anymore. With the new G1- IPM series it is possible to obtain substantial system efficiency improvement by utilizing an advanced Si-IGBT chip and implementing an adaptive gate control.

Mitsubishi Electric has introduced the new G1 series Intelligent Power Modules (IPM) with an advanced Si-IGBT design to address several key performance parameters and enable the end-user to achieve high system performance. The advancements in the G1 IPM chip technology are aimed at resolving some inherent drawback of the Si-IGBT especially when it is employed for motor control applications. The G1 IPM device has been developed by implementing some key advancements in the latest 7th generation IGBT. It can be noticed (refer Figure 1) that in comparison to the 7th generation conventional Si-IGBT, the advanced G1 IPM chip technology offers significant benefits although it belongs to the same chip generation.

Figure 1: A comparison of the VCEsat x EOFF index for different SiIGBT technologies

Short circuit protection for a conventional Si-IGBT has been implemented using a ‘desaturation detection’ based system where the VCE across the IGBT is observed to ascertain the occurrence of a short circuit event. To facilitate a successful detection, the conventional SiIGBT devices are designed such that several gate cells in the chip are left unconnected [6][2]. While this ensures that the IGBT enters into the desaturation mode beyond a particular value of IC, it also means that several electrical parameters are compromised to a certain extent [6][2][3].

The G1 IPM possess a Si-IGBT chip with a monolithically integrated current sense emitter (refer figure 2). The sense emitter feature facilitates an assessment of the IGBT collector current via direct measurement. Based on the input from the sense emitter, trip levels can be assigned and an SC turn-off can be initiated before the chip desaturates. This approach to directly determine the instantaneous I C renders the VCE based desaturation detection system obsolete. Thus, it is no longer necessary to ensure that the IGBT enters into the desaturation mode.

As a direct consequence, all available gate cells in the Si-IGBT chip can be connected transforming the chip into a ‘full gate IGBT’ and the subsequent electrical benefits can be harvested due to the enhanced utilization of the Si-IGBT chip [1]. Additionally, the IGBT chip is provided with an on-chip temperature sensing diode in the center of the chip in order to ascertain the IGBT junction temperature with maximum effectiveness (refer figure 2). 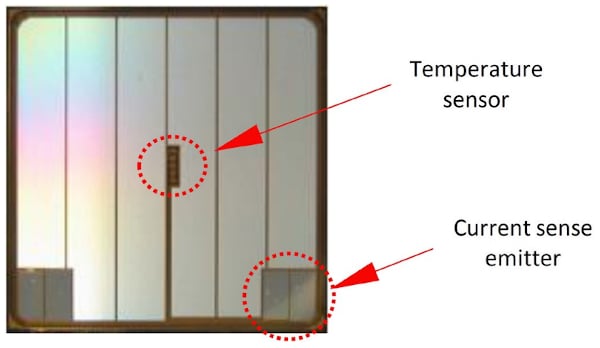 Figure 2: The temperature sensor and the current sense emitter components of the IGBT chip in the G1-IPM

One factor that negatively influences the lifetime of the insulation layers in the system (motor winding insulation or cable insulation) is the exposure to high speed transient voltages (dv/dt). The IGBT switching event is capable of generating high dv/dt at the terminals of the power module (especially during a turn-on event). A conventional solution to address this issue is to restrict the switching speed of the IGBT by employing a gate impedance such that the switching dv/dt is maintained below a particular level. The dv/dt versus IC characteristics is such that the highest dv/dt (worst case dv/dt) is experienced during turn-on of low IC and the turn-on dv/dt reduces with an increase in IC.

Although the worst case dv/dt would be generated only during turn-on of low IC, a conventional gate driver with fixed turn-on gate resistances will force a restriction of switching speed for all values of IC. This approach will generate significant turn-on losses while operating at high IC even though the switching dv/dt is not the worst case during high IC operation. It is therefore clear that for conventional Si-IGBT technology, there is a trade-off between controlling the worst-case dv/ dt and efficiency. 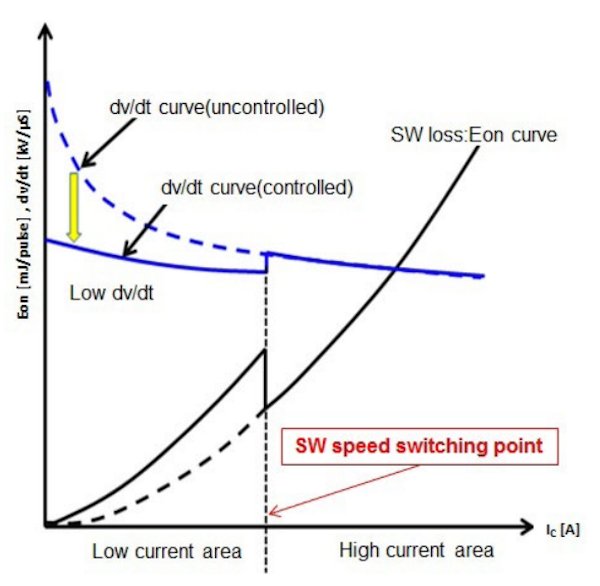 Figure 3: Utilization of the sense emitter to implement a switching speed control in the G1 IPM

The sense emitter provision in the advanced full gate Si-IGBT opens up the possibility to ascertain the IC. Based on the dv/dt vs IC dependency, it is clear that to address the worst case dv/dt, it is appropriate to implement a switching speed restriction only during the switching of low IC. Considering this key point, a switching technique has been implement in the G1 IPM Si-IGBT devices where the turn-on switching speed is regulated based on the IC. If the IC (from the sense emitter data) is ascertained to be below a particular threshold, the gate drive unit will be informed to apply a switching speed restriction such that the worst case dv/dt is avoided. When the switching IC exceeds the pre-set threshold value, the gate drive unit will be informed to turn the IGBT ON with a higher switching speed, such that the turn-on losses can be optimized. With this approach, the worst case dv/dt is avoided during switching, while simultaneously ensuring that the system efficiency is not compromised (refer Figure 3).

The G1 IPM module utilizes the full gate 7th generation Si-IGBT which is equipped with the monolithically integrated sense emitter. This approach is aimed at combining the benefits of the full gate SiIGBT along with the advantages of the sense emitter component. The target is to ensure maximum efficiency, high reliability (instantaneous IC based SC protection) and an acceptable EMI profile (dv/dt control). Figure 4 shows a comparison of the overall power loss performance of the full gate device with the conventional Si-IGBT (under the same turn-on dv/dt condition). As evident from Figure 4, the full gate IGBT device generates approximately 18% less overall losses than the conventional Si-IGBT device under the mentioned working conditions. 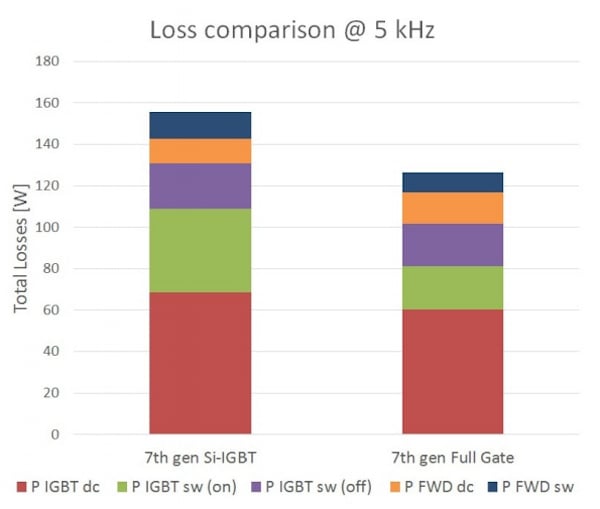 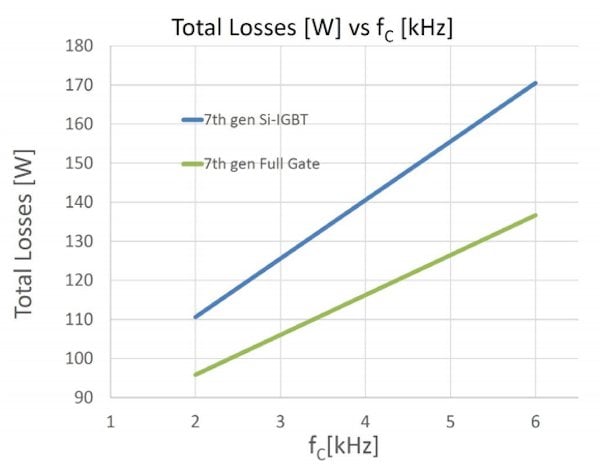 For applications which require an operation at low levels of audible noise (high switching frequencies are necessary), the 7th generation full gate IGBT (with sense emitter) promises enormous system level benefits. Certain overload operation points exist for motor control applications. During the stand-still (locked rotor) condition - the load current is not symmetrically distributed among the inverter IGBTs, and during extremely low output frequencies - the inverter IGBTs can experience a high current ripple. Under such overload conditions, it is crucial to determine the IGBT junction temperatures of each chip to avoid an over-temperature failure event. The IGBT junction temperature can be effectively monitored using the on-chip temperature sensor integrated on each chip.

It can thus be concluded that the full gate Si-IGBT equipped with the sense emitter feature and the on-chip temperature sensor address several key challenges which were inherent to the conventional SiIGBT approach thereby allowing the inverter developer to achieve significantly higher system performance.