Ultrasonic wire bonding is an established technology for connecting the electrodes of microelectronic devices as well as power electronic modules. Bonding on demanding surfaces like connector pins embedded in plastic frames can challenging. A new approach for suppressing unwanted vertical vibrations by an active vibration control can improve bondability.

Typically an aluminium wire connects the electrodes of a power semiconductor with the corresponding electrodes of a substrate. The wire is bonded to the electrode surface by an ultrasonic friction welding process. Due to the very high requirements concerning quality and reliability of the electric connections, a very precise control of the process is required. Continuously increasing machine speeds intensify this demand. Another challenge is bonding on demanding surfaces, like slim connector pins embedded in plastic frames, other soft underlayers like overhanging (stacked) dies, or poorly supported lead frames. Objective The ultrasonic transducer is a key component of a wire bonding machine. It generates the power for the bonding process in the form of mechanical vibrations in the ultrasonic frequency range. It is driven in a longitudinal eigenmode, which due to the asymmetric mounting of the bonding tool is typically not perfectly symmetric and shows residual vibrations orthogonal to the main bonding direction. Beside this eigenmode, additional orthogonal vibration modes exist as well as eigenmodes of the substrate or the bond pad base. In conjunction with the nonlinear process dynamics, this can lead to fluctuating normal forces in the friction contact and a disturbance of the bonding process. 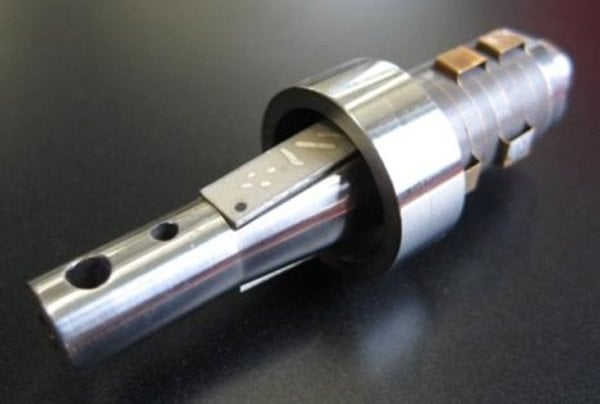 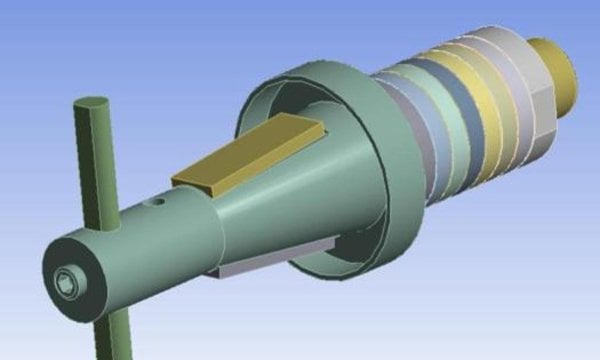 The aim of this study is to show the capability to suppress or at least reduce unwanted vertical vibrations during operation by the use of special control actuators and a proper vibration control method. Reducing process variance and increasing bonding stability and reliability are adjacent objectives. This research was done within the large-scale integrating project HIPER-ACT (Novel technology for high-performance piezoelectric actuators), funded by the European Community’s Seventh Framework Programme FP7/2007-2013 under grant agreement n° 212394 (hiperact.org). Within this project, a new technology for piezo-actuators with InterDigitated Electrode Technology (IDE) has been developed. These piezo-actuators were used in the technology demonstrator for vibration damping in ultrasonic bonding (see. Figure 1). 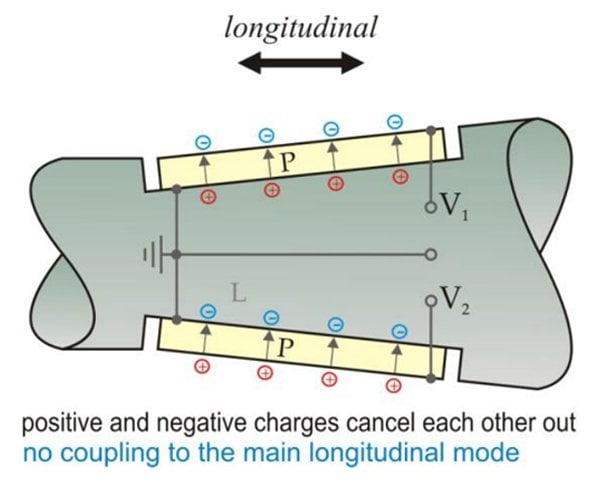 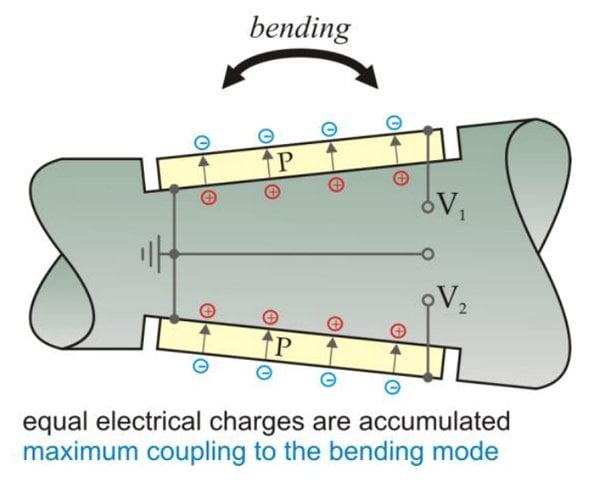 A novel prototype transducer is developed, which is capable of suppressing orthogonal vibrations using additional piezoelectric control actuators. It is required that these actuators do not influence the main longitudinal vibrations, but only act on the orthogonal vibrations. This is achieved by using a special configuration of the control actuators. Two of these are mounted on the top and bottom sides of the transducer body. The polarisation of the control actuators is chosen as depicted in Figure 2. In free longitudinal vibration the electrical charges on the electrodes of the top and the bottom actuator cancel each other out (Figure 2 left: V1+V2=0). In bending vibration one piezoelectric ceramic is ‘stretched’ while the other ceramic is ‘compressed’. Because of the opposite polarisation, the full piezoelectric effect can be used in this case (Figure 2 right: V1=V2). Therefore applying a voltage to the control actuators induces a pure bending or vertical movement of the transducer body without effecting the main longitudinal vibration. By this means an optimal coupling is achieved for the orthogonal bending mode while the coupling to the longitudinal mode is zero.

Within the first part of this project, a proof of concept demonstrator has been built. This includes the evaluation of different vibration damping techniques – a piezoelectric shunt damping technique and an active open-loop control. To investigate and set up these techniques a suitable model is essential. Therefore the ultrasonic transducer has been described by a finite element model, which can be used to calculate the dynamic vibration behaviour of the transducer. The FE-model has been validated by frequency response measurements. Additionally, a modal reduction of the finite element model to the two most relevant eigenmodes is made. The system is then described by a model with two degrees of freedom (2-DOF model) which can describe longitudinal and bending motions. This model is essential to calculate the optimal parameters for both the active vibration control and the passive damping technique. These investigations and the model equations are reported in detail in [1] and [2]. 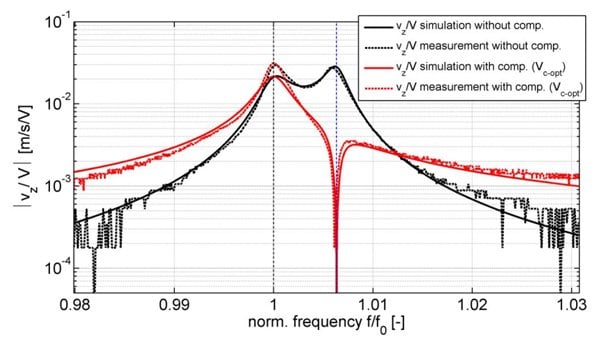 For the active open-loop control the optimal voltage amplification and phase shift with reference to the driving actuators are calculated using the 2-DOF model. With these parameters, the vertical vibrations at the tooltip should be fully compensated. This was proven experimentally for the free vibration steady state. Figure 3 shows the frequency response characteristics for the vertical vibrations of the tooltip measured via laser doppler vibrometry. In this example a parasitic mode exists beside the main mode. The optimal control parameters for this specific frequency (norm. frequency 1.006) were calculated and the system behaviour was measured again. The correlation between calculated and measured characteristics is very good. The predicted “total” compensation was validated with a maximum reduction of the vertical vibrations of more than two decades (s. Figure 3). 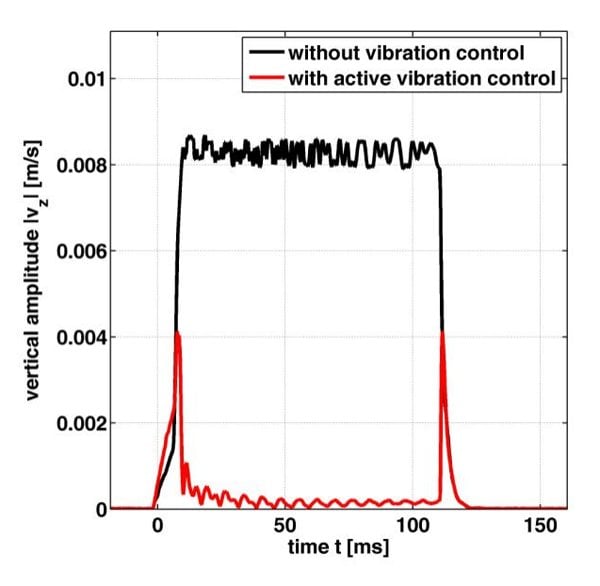 Figure 4: Active vibration compensation with friction contact of the tool​

For the passive vibration damping technique, a passive inductance resistance (LR)-circuit is connected to the electrodes of the piezoceramics, in simulations as well as on the prototype. This passive damping technique does not require external power and is inherently stable. For proper operation the network parameters must be tuned precisely. Measurements of the free vibrations and of the frequency response showed a strong damping effect and a decrease of the vertical vibrations by a factor of more than 10. However, a total suppression is not possible with this technique.

To study the active vibration control technique, initial experiments were conducted without wire. In this case, other than in the bonding process, there is a steady friction contact at the tooltip. Figure 4 shows that the active control can reduce the basic harmonic completely in this case. But the investigations also revealed that because of the nonlinear friction force characteristic higher harmonics of quite low amplitude remain.

In order to perform a full-scale bonding test, a bonding machine was equipped with a two-channel ultrasonic driving system and two power amplifiers as well as a special software to control both channels. It was proven that both proposed damping techniques – shunt damping and active vibration control – are capable to improve the vibration behaviour during bonding significantly, especially in difficult circumstances, e.g. on poorly supported surfaces. 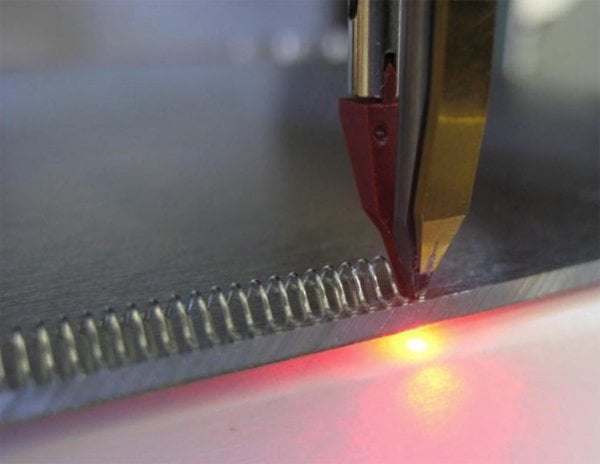 Figure 5: Measuring vertical vibrations below the bonding spot by laser

Figure 5 shows a test specimen in which an aluminium plate was intentionally mounted so that the bonding area was overhanging and not supported in order to make the bonding process especially prone to vertical vibrations.

The passive shunt damping technique with a tuned LR-network shows a significant damping effect and reduces the vibration amplitude by about 50%. But its frequency bandwidth is quite small, which means that the optimal inductance value must be met quite accurately. Possible frequency changes during operation due to temperature and power dependency of system parameters have to be considered. The advantages of the passive shunt damping technique are its simplicity and inherent stability. No additional hard- or software is necessary. But its lower damping performance and the sensitivity towards parameter deviations are limiting its application. 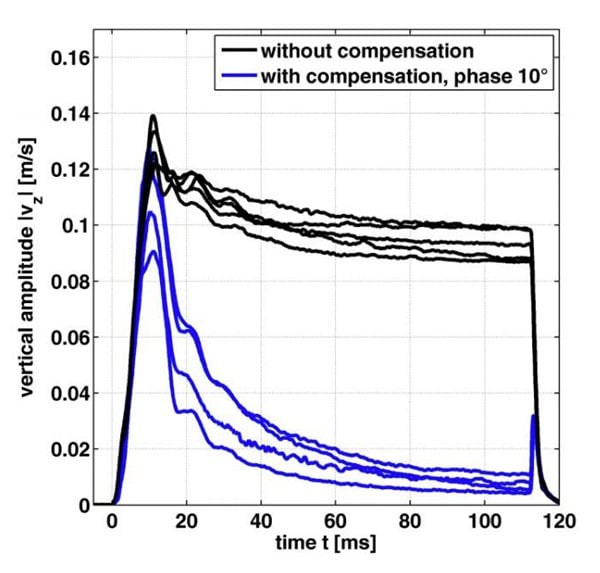 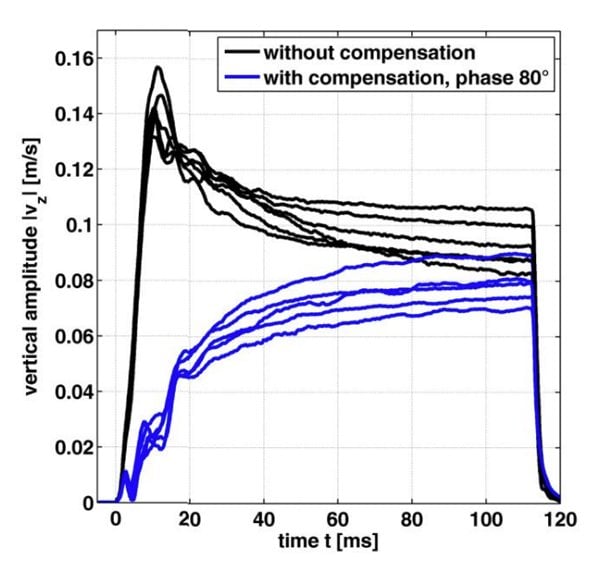 The very profound advantage of the active feed-forward vibration control strategy is its possibility to realize an almost complete suppression of orthogonal vibrations at any desired operating frequency. But for this considerable more control effort and a high voltage supply for the control actuators are necessary. It was found that because of the nonlinear time-varying bonding process the optimal control settings are not fixed, but a function of the process and thus time-varying. As depicted in Figure 6, especially the phase angle has to be adapted to gain full compensation during the entire bonding process. A vertical vibration sensor, e.g. integrated into the control actuators, can enable the set-up of a closed-loop control in order to suppress the vertical vibrations in any case.

An additional promising observation during the test was a reduction in the standard deviation of the measured signals. With active vibration control, the natural fluctuations of the process seemed to be decreased. Further studies and tests have to confirm this.

The passive vibration damping system can be incorporated with low effort into a serial machine, leading to a reduction of vertical vibration of about 50%. With an active vibration damping system, an almost complete compensation of vertical vibration is possible. For this, an additional sensor has to be incorporated and a closed-loop control is necessary. For applications with extended demands, this extra effort could be reasonable and such a system could be implemented in future machines to reach optimal performance.

Michael Brökelmann studied mechanical engineering at Paderborn University and the University of Waterloo Canada and received a doctorate in 2008 for his work on process integrated quality control in ultrasonic wire bonding. Since 2006 he is working as a senior engineer at Hesse GmbH, a leading manufacturer of ultrasonic wire bonding machines. He mainly works on the design and evaluation of ultrasonic systems, bond process analysis and on new developments in interconnection technology. Since 2016 he is heading the research department at Hesse GmbH.