In a recent paper titled, A Missing Active Device - Trancitor for a New Paradigm of Electronics, Sungsik Lee, Professor in the Department of Electronics Engineering at Pusan National University introduced the concept of a “missing” active device, called trancitor, for the first time. This kind of active devices directly transfers an input signal into a voltage output whereas a transistor transfers its input signal into a current output, thus an inverse operation of transistors.

This inverse relationship between a trancitor and transistor can naturally lead to a minimal circuit configuration as a trancitor-transistor merger in comparison with a transistor-only circuit. Eventually, it can help virtually to meet the Moore’s law, guiding to a new paradigm of electronics where trancitors and transistors are combined optimally.

"Considering Figure 1 (below) it is also recognized that two other active devices can naturally be deduced<' observed Dr. Lee.

"However, to the best of our knowledge, current-controlled voltage source (CCVS) and voltage-controlled-voltage-source (VCVS) types are missing in the elementary level, which are commonly voltage-source (VS) devices," Dr. Lee concluded. 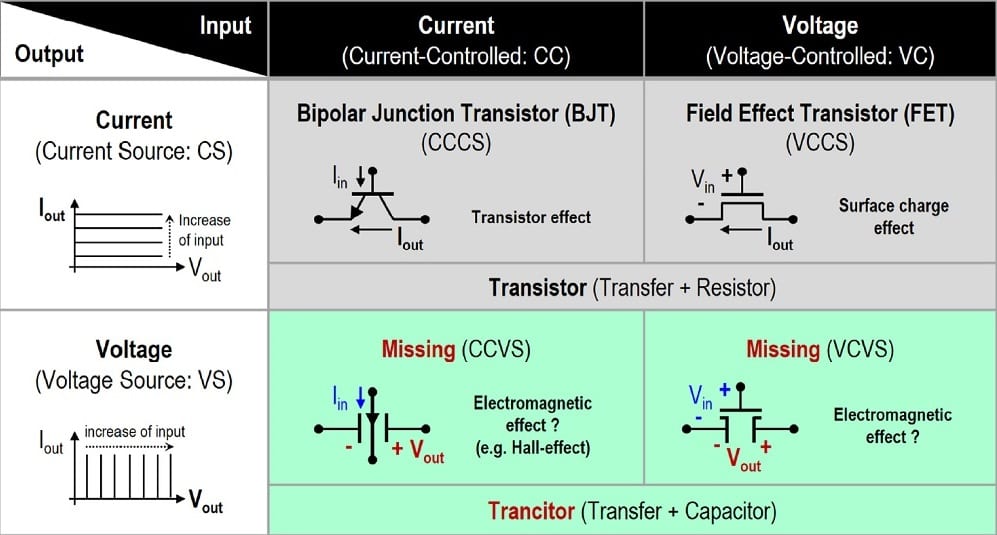 Figure 1: A theoretical list of elementary active devices deduced from 4 possible combinations of the current and voltage at the input and output, respectively. Here, it is found that trancitors are missing as CCVS or VCVS-type active devices (Inset: symbolic representations for each category). (click on figure to enlarge)

Dr. Lee continued: "Due to the absence of these devices, a transistor-based circuit alternatively employs a complicated load circuit macroscopically operating as those elementary devices. And this gives rise to a high complexity and power-consumption. In other words, if there exists, the VS elementary device can directly provide a voltage output without a sophisticated load circuit, while minimizing a circuit complexity and power-consumption.

"This category of devices is transferring its input into a voltage signal at the output working like a capacitor. So, it can be named trancitor as a compound word of transfer and capacitor," Dr. Lee observed. 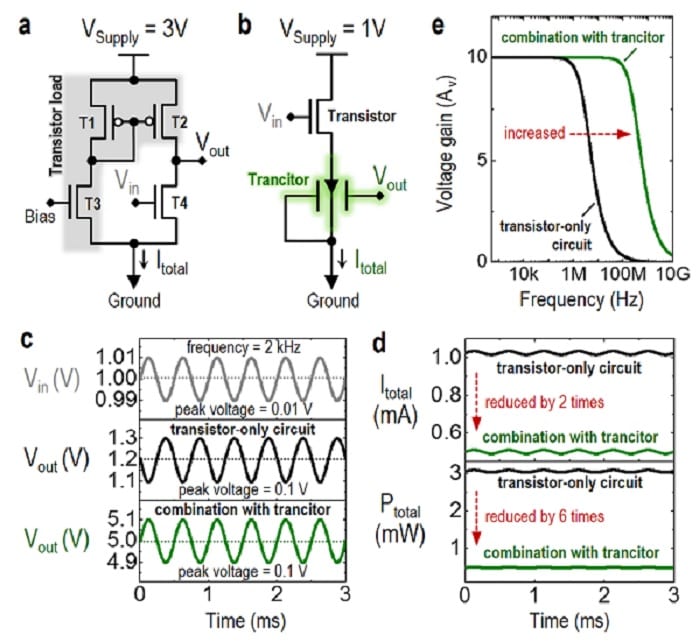 Explanation of Figure 2 (above):

(a) Schematics of a simple voltage amplifier only based on transistors (i.e. transistor-only circuit). Here, T1 and T2 are P-MOSFETs while T3 and T4 are N-MOSFETs. And transistors T1 to T3 compose a load circuit to have macroscopically an inverse function of the main transistor T4.

(b) Circuit diagram of a trancitor-transistor combination to be a voltage amplifier with an equivalent functionality to the transistor-only circuit.

(c) Transient waveforms of the input and output signals for each case.

(d) Total current and power-consumption as a function of time for each circuit.

(e) Plot of the voltage gain versus frequency comparing the transistor-only case with the other case where a trancitor and transistor are combined.

It is found that there is a missing elementary active-device to be called trancitor as an inverse form of a transistor. While our current state of electronics is composed of transistors only, it turns out that the absence of a trancitor makes electronic circuits very complicated with employing sophisticated loads.

So, it is important to find the trancitor for a new paradigm of electronics coupled with transistors, leading to a lower complexity, lower power-consumption, and even higher operating speed of their circuit compared to a transistor-only circuit. These suggest that it would be essential for futuristic electronics, such as thin film electronics, wearable and neuromorphic systems, where those performances are crucial.

Finally, it is strongly implied that the proposed trancitor concept may be one of the only ways to go beyond CMOS electronics, where a totally different operating principle should be applied while revolutionizing our electronics in a more fundamental way, along with trancitors, rather than just scaling down the existing transistors for meeting the Moore’s law.