Spintronic devices, which use electron spin to process data, are emerging at the forefront of semiconductor applications. Staying a step ahead, scientists from Korea recently developed a novel nanomaterial that shows uniform ferromagnetism even at room temperature. This material is expected to be applicable to future next-generation electronic devices.

Growth in the number of smart electronic devices has sparked an increase in research interest in high functionality nanomaterials. Spintronic devices, which exploit a property of electron spin to process electronic data, have emerged as major players in this field.

Recently, 2D and quasi 2D materials, such as α-molybdenum oxide (α-MoO3), have gained research attention for use in spintronic devices, owing to their unique physical, chemical, mechanical, and structural characteristics. α-MoO3, in particular, is attractive because of its structure, which comprises stacked 2D layers. This structure makes it ideal for introducing magnetism, enabling its more effective use in a number of devices than conventional 3D bulk materials. 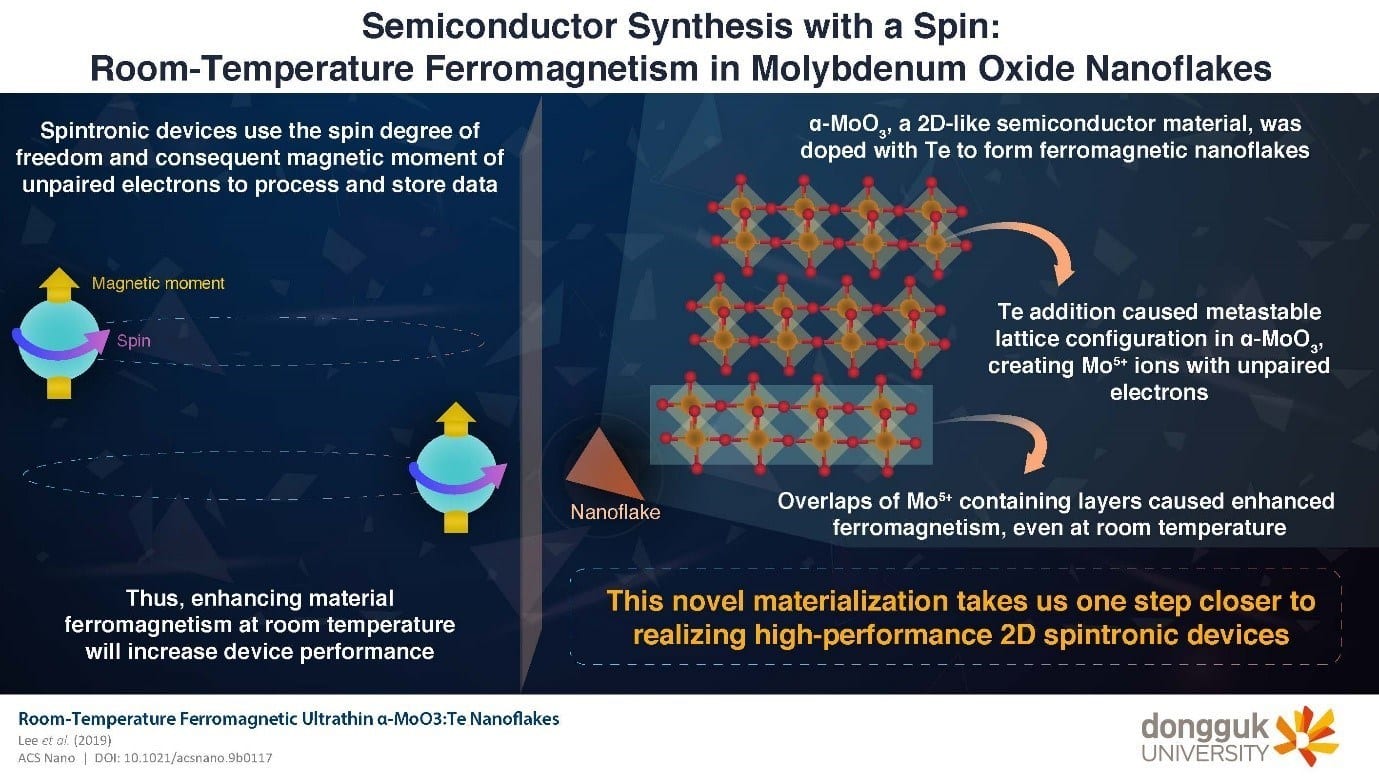 To make an α-MoO3 nanoflake magnetic, scientists at Dongguk University, Korea, led by Prof Lee, doped tellurium atoms into its lattice, disrupting its structure and freeing up an electron. As electrons revolve around the nucleus of an atom, they also spin on their axis. This spin gives rise to magnetism called the spin magnetic moment. The spins of several overlapping electrons taken together make the nanomaterial magnetic.

But for electron spin to give rise to magnetic moment, the electron must be unpaired. Thus, this freed electron in the α-MoO3 lattice adds magnetism to the material. Across the multiple stacked layers of the lattice, magnetism was felt even at room temperature. This exciting new study is published in ACS Nano, a journal of the American Chemical Society.

The scientists imaged the tellurium doped α-MoO3 nanoflakes with scanning electron microscopy and found that the surface was smooth, and the magnetism was spread evenly over the material. This is unlike the case of conventional transition metal-doped magnetic nanomaterials, in which the formation of magnetic clusters and the consequent degradation of ferromagnetic properties is a major problem.

Optimistic about the applications of this discovery, Dr. Lee says, "The synthesized nanoflake can be effectively used for fabricating high-quality room-temperature ferromagnetic semiconductor nanostructures. Since spintronic devices are both highly energy-efficient and very useful for rapidly processing large amounts of data, a new paradigm can be created in the electronics industry."