ZincNyx has developed a patented regenerative zinc-air flow battery that efficiently stores energy in the form of zinc particles and contains none of the traditional high cost battery commodities such as lithium, vanadium or cobalt. The technology allows for low-cost mass storage of energy and can be deployed into a wide range of applications.

Unlike conventional batteries, which have a fixed energy/power ratio, ZincNyx’s technology uses a fuel tank system that offers flexible energy/power ratios and scalability. The storage capacity is directly tied to the size of the fuel tank and the quantity of recharged zinc fuel, making scalability a major advantage of the flow battery system.

Other types of standard and flow batteries are limited to a maximum charge and discharge by the total number of cells as there is no separation of the charge, discharge and storage components.

The basic system consists of a Regenerator unit, a Main Tank and a Fuel Cell. When the system is recharging, electrical power is used in the Regenerator unit to produce fine particles of zinc within a bearer electrolyte. As the system continues to be charged, the zinc particles are collected in the Main Tank, surrounded by the common electrolyte and oxygen is released to the air. 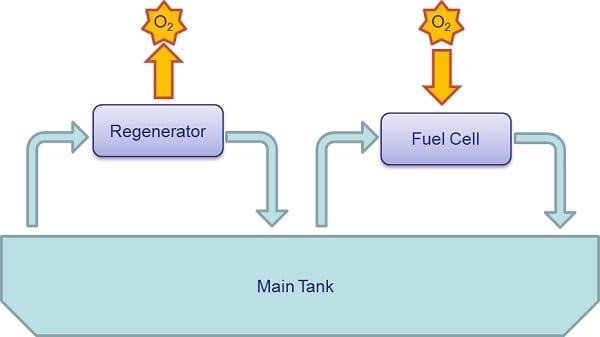 Although the Main Tank of the basic system may be made of any suitable size, there are practical limitations to the physical size and electrical capacity of the Regenerator and Fuel Cell units.

ZincNyx has overcome this restriction by developing an expanded capacity system wherein multiple Regenerator units and multiple Fuel Cells can be assembled into a single system to deliver a wide variety of configurations and capacities that can be optimized for individual applications. 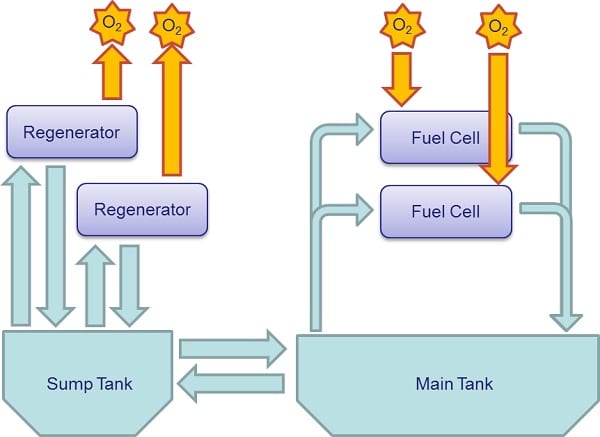 Whereas the Fuel Cells may be fed from the same electrolyte source, the Regenerator units must be free to exhaust oxygen at atmospheric pressure. In the basic system, this requirement places a restriction on the vertical placement of these units since any difference in height could lead to electrolyte overflow