MTPV Power Corporation has raised $16 million in a Series C financing. The financing was led by Lake Bridge Capital, an early stage investor in transformational companies with unique and proprietary technologies. Included in the round were follow-on investments from Total Energy Ventures, SABIC Ventures, and several other existing shareholders.

MTPV's system for thermal energy conversion is based on its proprietary micron-gap thermophotovoltaic technology. At its core, an MTPV system maintains a gap of less than one micron between a hot emitter chip and a cooler photovoltaic (PV) chip.

MTPV's EBLADE™ solutions (pictured above) use semiconductor technology to directly convert waste heat into electricity. This unique approach creates a highly efficient energy conversion engine that excels in environments where temperatures exceed 600°C, to over 1100°F. Future product generations will be effective in temperatures as low as 100° 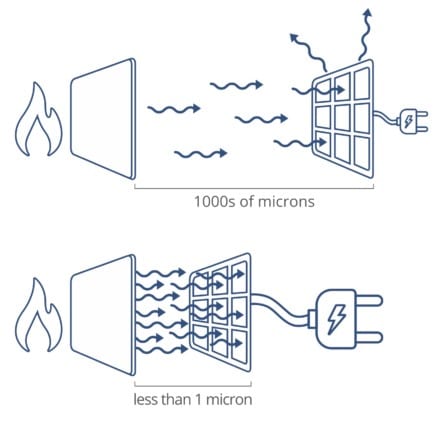 The maintenance of the sub-micron gap amplifies the intensity of infrared light that crosses to the PV, greatly increasing energy density while driving down the cost of produced power.

"We are excited to support MTPV," said Frank Egan, Managing Director of Lake Bridge Capital. "In addition to creating clean energy for its customers, MTPV will directly improve their bottom line by converting their waste heat to cost effective energy."

"We are delighted to have such a strong group of investors representing the views of not just stockholders, but of customers, supply chain partners and industry," said David Mather, President and CEO of MTPV Power Corporation. "The strategic insight provided by our investors is a key to the future success of MTPV."