DOE Hands GM $2.5B, Ford Makes Flurry of Moves as Race for EV Market Heats Up

DOE Hands GM $2.5B, Ford Makes Flurry of Moves as Race for EV Market Heats Up

A market update on continued acceleration in the electric vehicle (EV) sector, featuring two of the biggest players in the game: GM and Ford.

General Motors (GM) made headlines last week for securing a $2.5 billion loan from the Department of Energy (DOE) and inking new supply deals with Livent and LG Chem. Those moves came on the heels of a massive press release from Ford, released several days earlier on July 21, detailing its new battery capacity plan.

Both American car giants are investing billions in expanding their domestic supply chains for EV batteries as the global market faces surging raw material prices, mineral shortages and other supply stressors in the face of unprecedented consumer demand.

Below, we’ll summarize the carmakers’ recent plays and how they relate to broader market trends.

On July 25, GM secured a $2.5 billion conditional commitment from the DOE’s Loan Programs Office to support its construction of lithium-ion battery cell production facilities in Ohio, Tennessee, and the car giant’s home state of Michigan. 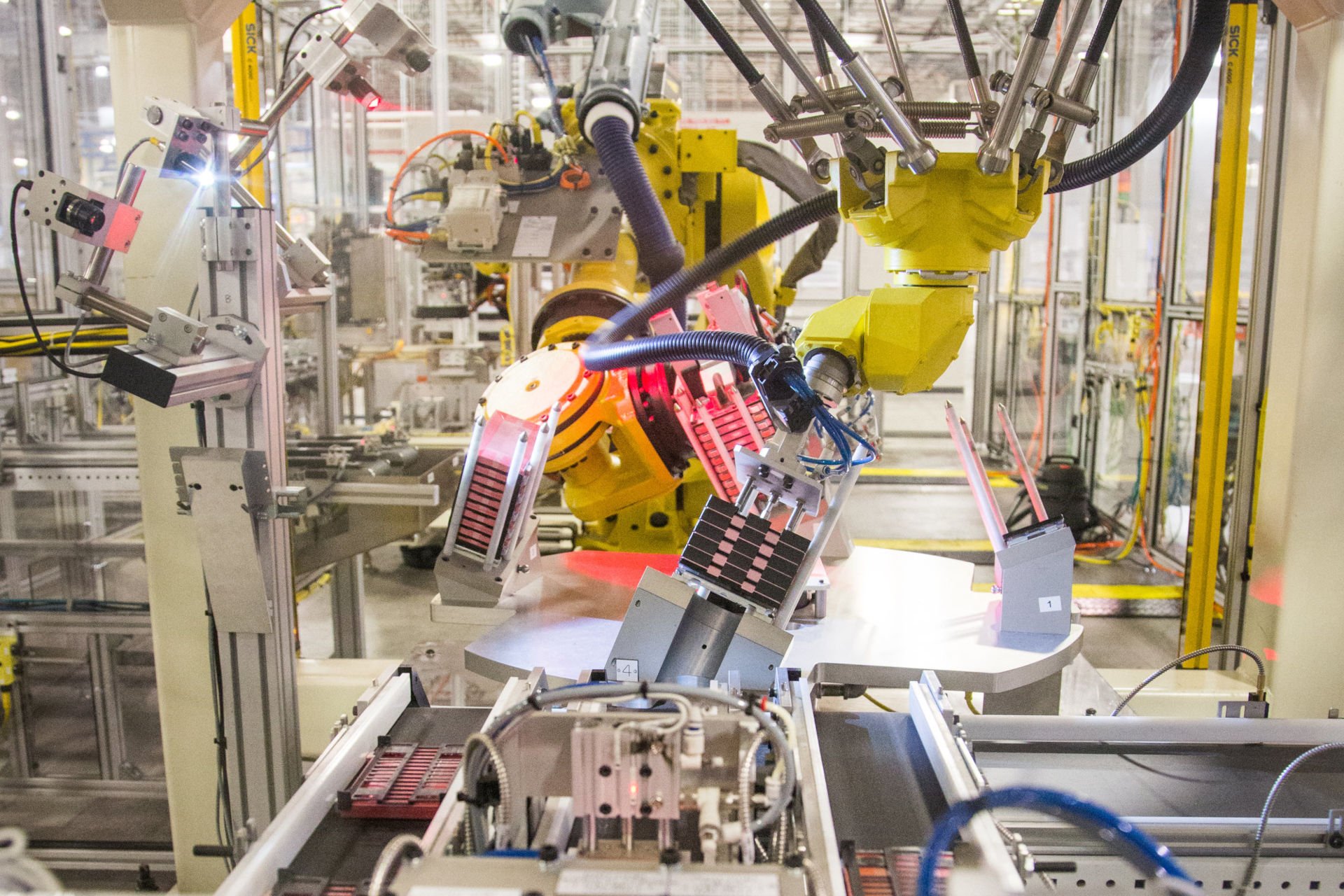 Both deals serve GM’s ongoing production expansions in the U.S. and North America, where it aims to reach a capacity of 1 million EVs by the end of 2025. The LG Chem agreement will explore the localization of a CAM manufacturing facility in North America by 2025, and the six-year deal with Livent aims to transfer 100% of downstream lithium hydroxide processing to GM’s North American operations.

As EE Power covered last week, GM is building a nationwide charging network to keep pace with its expected sales growth. The company plans to launch 30 new EVs globally by 2025, with about 20 available to North American customers. In total, GM has set aside $35 billion to invest in EV and autonomous vehicle (AV) development through the mid-decade.

Relatedly, the DOE loan is the first battery cell manufacturing project funded by the agency’s Advanced Technology Vehicles Manufacturing Program, which is pumping billions of dollars into domestic manufacturing for EVs, components and materials.

The Michigan-based car giant announced it has secured enough battery capacity (60 GWh annually) to deliver 600,000 EVs by late 2023, which is about 70% of what it needs to reach its target of 2 million EVs by 2026. 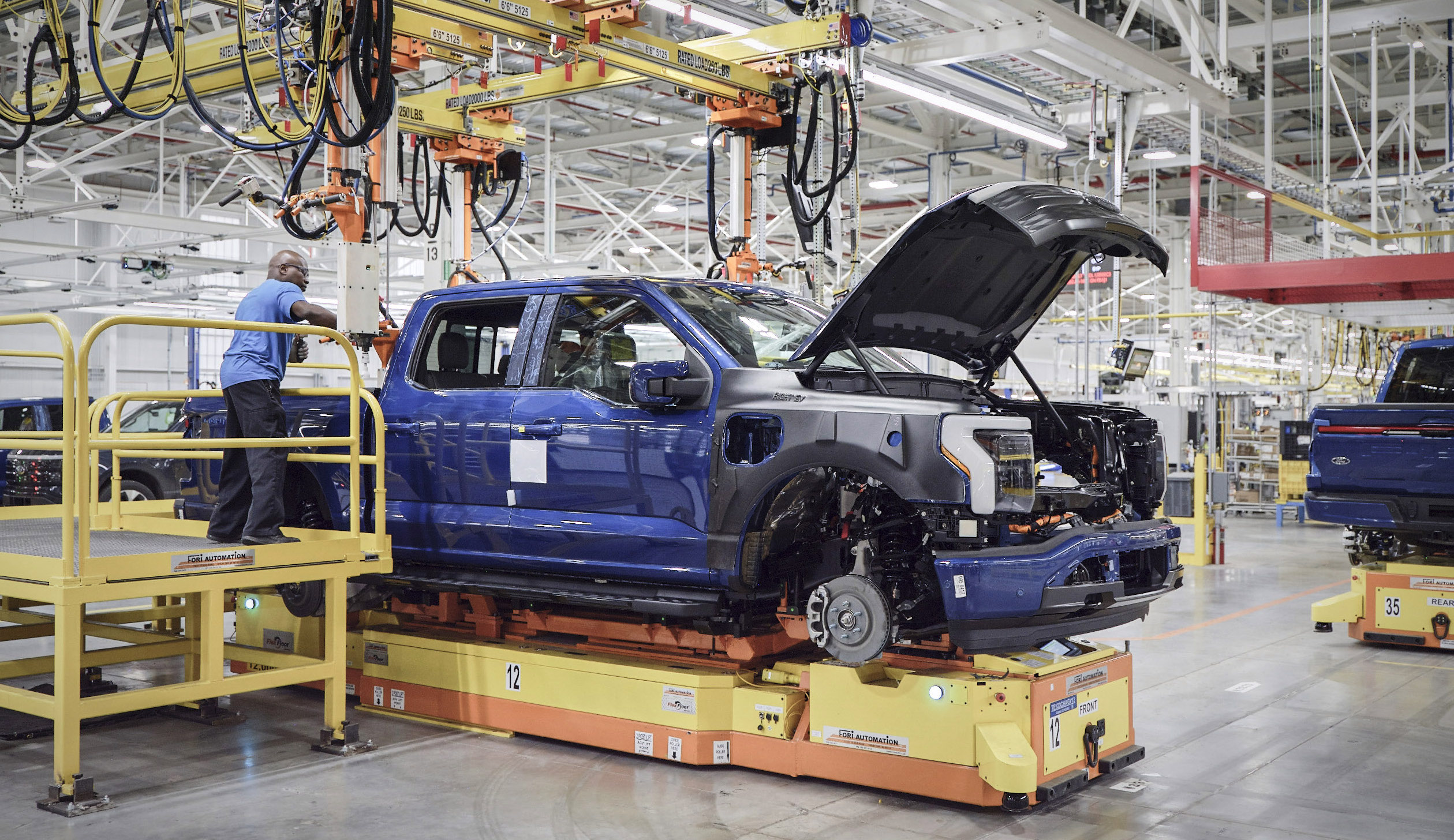 Starting in 2026, Ford will localize 40 GWh of its annual lithium iron phosphate (LFP) cell production, a new part of its chemistry portfolio, in North America. Ford says it has also secured most of the nickel it will need by then for production of its nickel-cobalt-manganese cells; the company locked in several lithium supply contracts from sources in Argentina, Australia and the U.S. as well.

Ford is working with South Korea-based SK On and LG Energy Solution (also a GM partner, as mentioned above) to meet its production capacity targets for late 2023. SK On and Ford are investing in a new North American facility to produce cathode materials for their joint venture, BlueOval SK.

In recent weeks, Ford has announced a slew of new agreements and partnerships to source its EV materials through domestic suppliers. That includes Kansas-based Compass Minerals, which signed a memorandum of understanding (MOU) last month to provide lithium via its lithium brine development project in Utah.

Ford will also use U.S.-sourced raw materials from two Australian partners: It has a five-year agreement with ioneer to source lithium carbonate from Nevada and an MOU with Syrah Resources for the supply of natural graphite anode material in Louisiana. 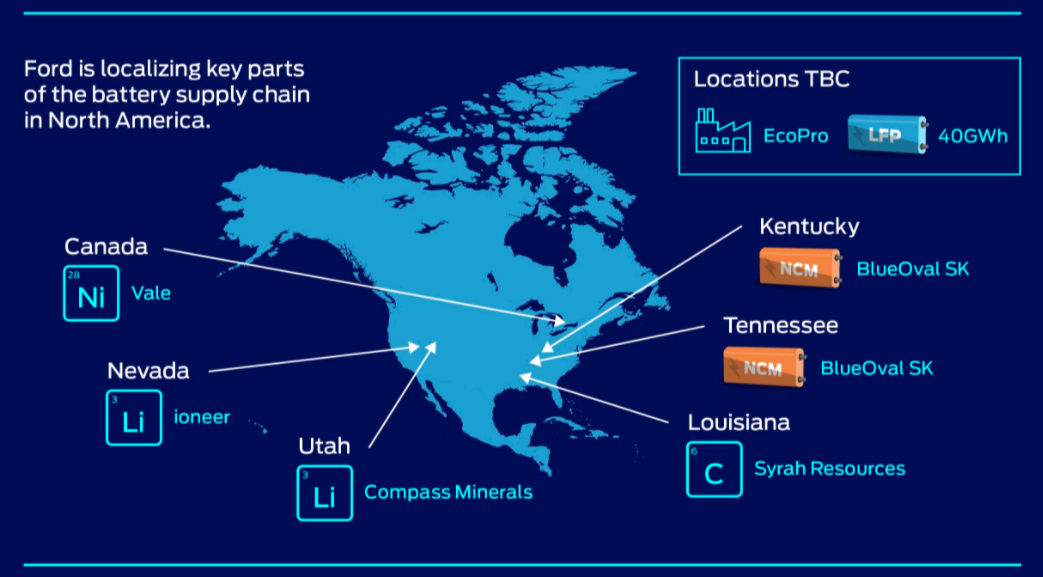 Overall, Ford is betting big on EV sales growth, spending over $50 billion on EV development through 2026.

In the Backdrop: Trends Behind Expanding US Production

With global supply chains reeling from material shortages, price hikes and other constraints, more companies are cashing in on government incentives to shore up their supply chains domestically.

As a result, state and federal subsidies are a growing force in propping up the EV sector. According to the International Energy Agency (IEA), the U.S.’s public EV spending tripled last year to $2 billion, while consumer spending doubled to $30 billion.

U.S. government spending on EVs tripled last year, but still pails in comparison to China and Europe. Image used courtesy of the IEA

Ford and GM are just two of many industry stakeholders standing to benefit from a wave of new federal funding programs and incentives.

The DOE’s battery policies and incentives database lists more than 100 active incentive programs related to battery development for EVs and energy storage applications. Many stem from the Bipartisan Infrastructure Law, which provides a whopping $7 billion for critical mineral supply chains and $7.5 billion for EV charging infrastructure.