The Crimson battery storage project is set to provide power for 47,000 homes annually and displace up to 275,000 tons of carbon dioxide in California.

Crimson Storage is the first standalone energy storage project approved by the Bureau of Land Management to be located on its lands under the Biden-Harris administration.

According to the State of California, the current number of wildfires recorded across the state includes 6,860, burning 366,121 acres of land. These figures are subject to change as the year progresses. U.S. Environmental Protection Agency research indicates that climate change has increased wildfire frequency, wildfire season length, and burned area. As temperatures continue to climb and drought becomes more prevalent, the ferocity, extent, and frequency of wildfires are expected to increase. Wildfires can release carbon dioxide into the atmosphere in vast quantities, exacerbating global warming even further.

Like other countries worldwide, the United States is obligated to meet the goals of the Paris Agreement, keeping global average temperatures from rising above 1.5 degrees Celsius by reducing greenhouse gas emissions. To do this, the United States, along with individual states, is turning to the latest green technology. 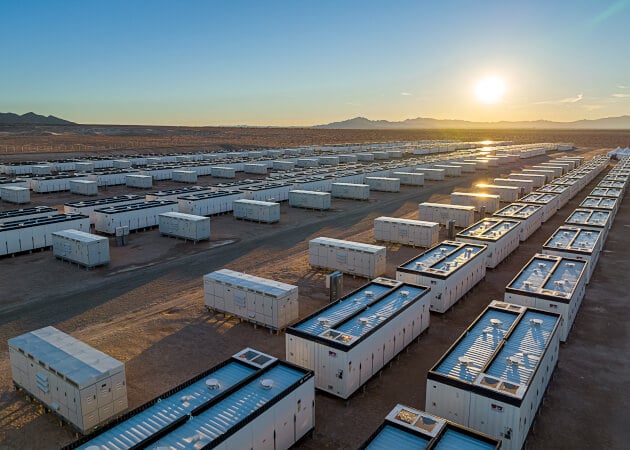 The Crimson Storage project site is on public lands in the California desert, west of Blythe in Riverside County. Image used courtesy of Canadian Solar

The Crimson battery energy storage system (BESS) is a 350 MW/1,400 MWh standalone system and reportedly the largest in the world to transition to operation in a single phase. The companies say that this project is also the second largest currently in operation. The first project of its kind by Canadian Solar, it is intended to provide backup energy to the main grid during peak demand, heat waves, and potential power outage events.

The Crimson BESS is also an invaluable way of using renewable energy that has been stored during times when production exceeds consumer demand. Stored renewable energy can be released by the BESS and used in place of fossil-fuel-powered peaking facilities.

Two long-term energy storage contracts have been secured under the Crimson project with two of California’s largest utility companies:

With the PG&E contract, Axium and Recurrent Energy intend to run the BESS in the California wholesale energy market. The two contracts are part of the California Public Utilities Commission’s reliability procurements to bring California zero-emission, clean energy that meets the state’s reliability and decarbonization goals.

The Crimson BESS project is expected to provide storage and power for 47,000 homes each year. The project is also expected to displace 47 tons of nitrogen oxide emissions and 275,000 tons of CO2 emissions annually. Regarding CO2 emissions, Axium posits that this would be equivalent to taking more than 53,000 vehicles off the road.