Lithium-ion batteries are one way to enable renewable energy to fight climate change — but battery raw material costs have increased by more than 400%.

Climate change is finally getting attention from politicians and policy wonks. After nearly a decade of inactivity and little more than lip service, the urgency of the need for immediate action is finally getting through as the adoption of electric vehicles (EVs) and renewable energy sources like solar and wind addresses the change in the Earth’s climate caused by the burning of fossil fuels. The enabling technology for both EVs and intermittent renewable energy sources is electric energy storage (ESS), better known as batteries. But there is a significant fly in the ointment as the cost of lithium—one of the critical ingredients in lithium-ion batteries—has soared more than 400 percent over the past year. Just when things were starting to head in the right direction, the cost of getting there started increasing dramatically. 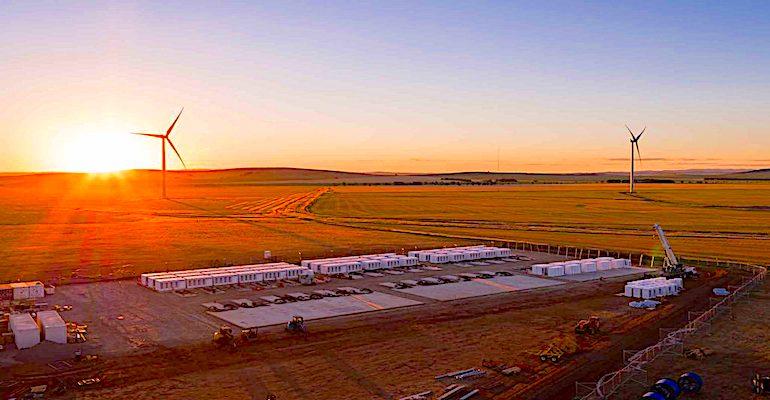 Here is the Challenge

In April 2022, the Intergovernmental Panel on Climate Change (IPCC) Working Group III released its latest report (Sixth Assessment Report) on climate change mitigation. The 3,675-page report was approved by 195 member governments of the IPCC and says that global greenhouse gas (GHG) emissions must peak by 2025 for the chance to limit temperature increases to the 1.5°C goal that was set out in the 2015 Paris Agreement. The report says that global emissions must then fall by 43% by 2030—in addition, there must be a reduction in methane emissions of around 33% from 2019 levels. Without immediate and deep emissions reductions across all sectors, the IPCC says limiting global warming to 1.5°C is beyond reach.

A vast amount of carbon dioxide (CO2) is emitted from the combustion of fossil fuels. Coal, oil, and natural gas are fossil fuels and resulted from the geologic transformation of organic materials (primarily plants) over millions of years and under tremendous pressure. CO2 from the atmosphere absorbed by plants when they were living is stored in the form of fossil fuels and then released when the fuels are burned. This adds enormous amounts of CO2 to what were once the normal levels of GHGs in the atmosphere. As the concentration of GHG gases like CO2 increases in the atmosphere, more of the sun’s heat is trapped, causing an overall warming of the planet. The byproducts of nearly two centuries' reliance on fossil fuels for energy, heating, and transportation are changing the climate of the planet and the chemistry of the Earth’s oceans.

Climate scientists generally agree that the global temperature will stabilize when carbon dioxide emissions reach net zero. According to the IPCC, a 1.5°C (2.7°F) global rise means achieving net-zero carbon dioxide emissions globally in the early 2050s. For a two °C (3.6°F) rise, net-zero must be reached in the early 2070s. The IPCC assessment shows that limiting warming to around 2°C (3.6°F) still requires GHG emissions to peak before 2025 and be reduced by a quarter by 2030.

How to Get There

Reaching these limits to climate change will only be possible through significant transitions in both the energy and transportation sectors, requiring a dramatic reduction in fossil fuel use through widespread electrification of transportation, improved energy efficiency, and broad adoption of renewable energy sources.

“Having the right policies, infrastructure, and technology to enable changes to our lifestyles and behavior can result in a 40-70% reduction in greenhouse gas emissions by 2050. This offers significant untapped potential,” said IPCC Working Group III Co-Chair Priyadarshi Shukla in an IPCC press release. “The evidence also shows that these lifestyle changes can improve our health and wellbeing.”

Although EVs are getting much attention, reducing CO2 emissions from the electrical power grid by obtaining energy from renewable sources such as hydroelectric, wind, and solar may have a more significant impact. A green grid not only impacts home and industrial electricity usage, it also increasingly helps the EVs that are charged from the power grid become cleaner.

Wind power has become a significant factor in the US. In 2021, wind was the fourth-largest electricity source behind natural gas, coal, and nuclear and on March 29, 2021, according to the Energy Information Administration (EIA), a record was set when wind was the second-highest source of electricity. On that day, wind turbines generated over 2,000 gigawatt-hours of electricity, edging out electricity generated by nuclear and coal, while still trailing behind natural gas.

But wind and solar are intermittent, producing energy only when the sun is shining and the wind is blowing. The electricity generated must be stored for future use. Traditionally, pumped hydro storage is the largest form of grid energy storage, accounting for up to 95 percent of all installed grid storage worldwide.

Pumped hydropower methods rely on two connected reservoirs that sit at different levels. When the sun is shining or the wind is blowing, renewable energy is used to pump water from the lower reservoir to the upper one, storing the energy. At night or when demand is high, the water from the upper reservoir flows downward, through a water turbine, generating electricity as the water flows back to the lower reservoir. These reservoir hydro systems require significant space which can have both environmental and social impacts.

Lithium-ion and flow batteries are electrochemical ways of storing energy. In a flow battery, electrical energy is stored (and later released) by pumping two separate fluids that store a charge through an electrochemical cell that contains a membrane through which ions can be exchanged. The energy content of such a battery is scalable by simply using larger storage tanks for the fluids. Although a variety of flow batteries have been developed, the metal that is used for present commercial flow batteries, vanadium, is both relatively rare and expensive. 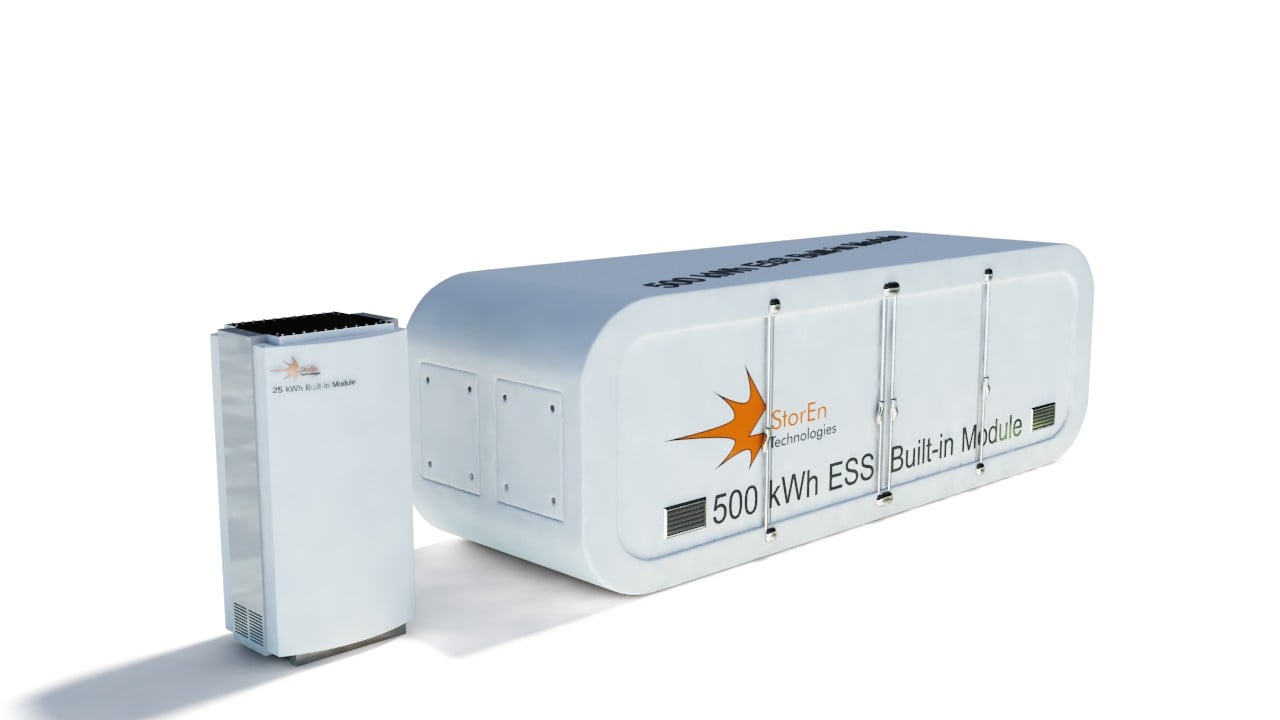 At present, the leading viable large-scale commercial electrochemical energy storage device is the lithium-ion battery. Lithium-ion batteries have been around for just over 20 years, finding applications in everything from cell phones and personal electronics to medical devices to (most notably) EVs, and on large scales to store renewable energy for power grids. 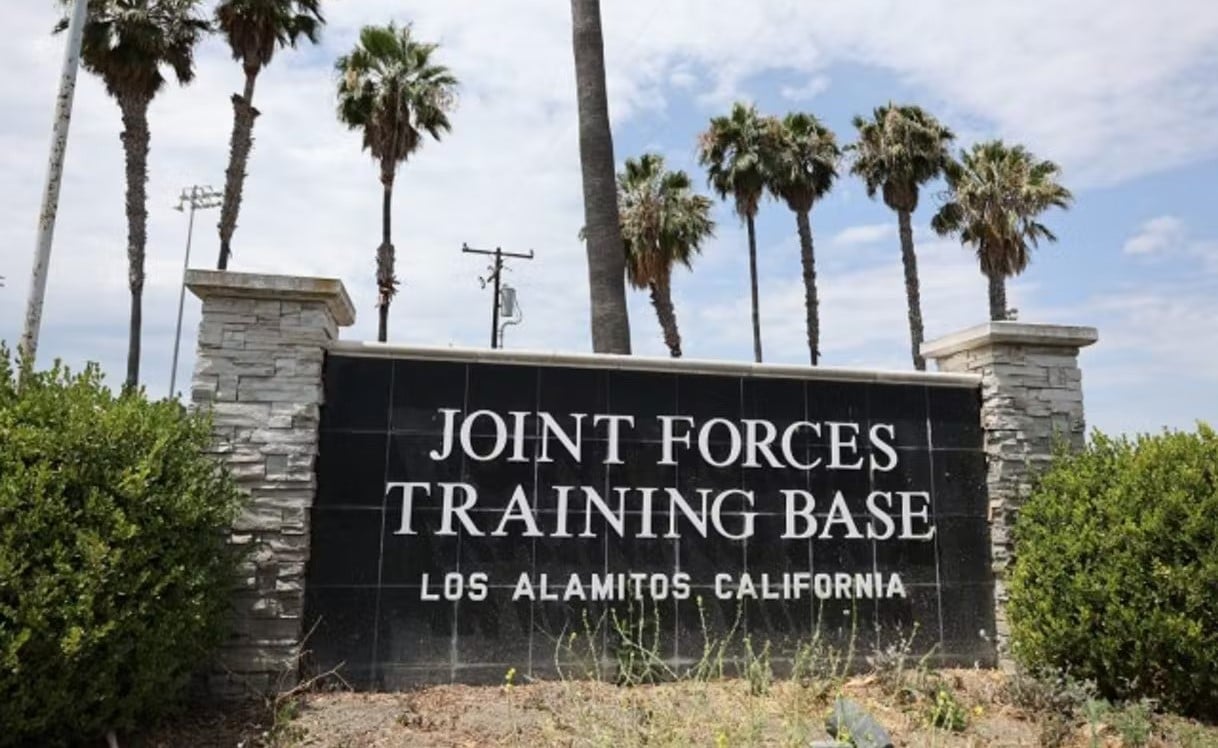 The U.S. military also uses lithium-ion grid storage such as at the Joint Forces Training Base in Los Alamitos, CA which will be powered by a 51-megawatt solar and storage microgrid. Image used courtesy of U.S. Army

For a long time, the lithium-ion battery chemistry used in EVs differed from that used for grid-scale energy storage. EVs require large amounts of power for vehicle acceleration and high energy densities to provide acceptable long-range. These two requirements have been reasons to promote nickel oxide-based (nickel-manganese-cobalt oxide, or NMC) cathodes capable of producing extremely powerful and energy-dense but relatively expensive lithium-ion batteries.

Recently EV companies like Tesla, Ford, and Volkswagen are warming up to LFP in some of their vehicles—particularly lower cost, base vehicles that don’t require the extreme performance that nickel-based cathode materials can offer. With automakers now joining the demand for LFP batteries, the energy storage industry is experiencing new and largely unwelcome competition for LFP production capacity.

According to IHS Markit, “The availability of LFP batteries depends on the pace at which automakers manufacture EVs using these cells as opposed other types of lithium-based batteries. In 2021, the automotive and transportation sector accounted for 80% of lithium-ion battery demand, a figure (IHS Markit estimates) is set to rise to 90% by the middle of the decade.”

As the demand for EVs shoots upward, the cost of lithium raw materials for use in their batteries has risen dramatically—lithium prices escalated by 400% between the fourth quarter of 2020 and the fourth quarter of 2021. S&P Global Platts reported that the seaborne lithium carbonate price soared 413% from the start of 2021 to $32,600 per metric ton (mt) on 14 December, while the lithium hydroxide price climbed 254% over the same period to $31,900/mt. The other metals such as aluminum and copper required to manufacture lithium-ion batteries have also risen across the board, adding to battery costs.

Bloomberg New Energy Finance calculates that each 20 percent increase in the price of lithium-carbonate results in a three percent increase in the total cost of battery modules. Lithium mines, primarily located in South America and Australia, can’t keep pace with market demand and new mines can take up to five years to become productive.

There is another factor that is increasing lithium-ion battery costs. The processing of the lithium raw materials into battery grade products takes place in China—this means that energy storage costs are also affected by the global shipping rates. The cost of shipping a 40-foot container, cost just $1,300 before the pandemic. In September 2021, it reached a high above $11,000. Additionally, because of congestion in the ports, in late October, ships were taking twice as long to unload at the Port of Long Beach, one of the world’s biggest container ports. Freight rates are not expected to return to “normal” until late 2023.

According to an IHS Markit analysis of clean technology trends released in February, grid-scale energy storage systems are unlikely to see any price declines until 2024, when the manufacturing of lithium-ion batteries scales up to meet the increase in demand from automakers. According to the Energy Information Agency, 5.1 gigawatts (GW) of utility-scale energy storage capacity was planned for the U.S. in 2022—supply chain disruptions, and in particular the cost of lithium, have brought into question whether these growth projections can be accurate. In a Solar Energy Industries Association report from March 2022, it was reported that “Utility solar installations this year are expected to fall by 14% compared to 2021, thanks to a combination of project cancelations and project delays from 2022 to 2023.”

It's becoming a worldwide problem. According to Renew Economy, France’s Neoen—one of the world’s leading producers of renewable energy systems which owns and operates the two biggest battery storage installations in Australia — has warned that “…the recent surge in lithium prices could cause delays to the enormous pipeline of big battery projects in the country.”

As useful as lithium-ion batteries are for grid storage, they are not the only game in town. As mentioned, commercially viable flow batteries have reached the market and are finding application in renewable energy grid support systems. It is also possible to make batteries from other materials—in reality, a combination of any two elements on the periodic table can be used to generate electricity—but some combinations of materials are better than others. Sodium, sulfur, iron, and zinc are all under consideration in laboratories around the world as lithium alternatives, however, the time between laboratory research and viable commercialization can often be measured in decades. Non-electrochemical energy storage strategies are also under consideration.

When the National Oceanic and Atmospheric Administration (NOAA) began collecting data at the Mauna Loa Observatory on the Big Island of Hawaii in the 1950s, the atmospheric CO2 concentration was around 315 parts per million (PPM). In April 2021 the concentration of CO2 measured 418.37 PPM. In mid-April in 2022, that number was 420.49 PPM. Each year, the amount of CO2 in the atmosphere creeps inexorably higher—until we do something about the burning of fossil fuels for transportation and energy generation and even well beyond, the trend will continue.

Like it or not, and even as the price of lithium increases, we must find ways to enable renewable energy and its requirements for energy storage—these technologies are our only clear path and hope for preventing catastrophic climate change.

Hoesung Lee, chair of the IPCC, said, “This report is a dire warning about the consequences of inaction. It shows that climate change is a grave and mounting threat to our well-being and a healthy planet. Our actions today will shape how people adapt and nature responds to increasing climate risks.”