Price pressure rises, also in railway industry, and will hence have an essential impact on the initial acquisition costs for electronics applications. As vehicles and the related infrastructure for railway projects are supposed to operate for decades, a reliable long-term planning is highly recommended: In many cases, costs will not emerge directly at the moment of purchasing, but will manifest only after some years of use. This article will analyze the key factors of decision when optimizing longterm costs and the comparative values this decision can be based on.

Voltage supply is the core part for a wide range of electrotechnical devices and applications. Devices and plants in various fields of application will be stressed in very different ways. As far as railway technology is concerned, very long operating times and functionality under harsh environment conditions (ambient temperature, temperature fluctuations, temperature change rates, vibration, humidity, pollution, EMC immunity) are required. It soon becomes clear that standard components for railway applications, as DC/DC converters, for example, will not offer a satisfying solution.

Lifetime as a Benchmark

Wearing parts as rail wheels, couplings, brake pads, compressors, valves, batteries or displays have to be maintained on a regular basis and, depending on their stress conditions, replaced at certain intervals. This will cause costs and downtimes for the vehicles. On the other hand, when it comes to electronic parts and system components, mechanical wear only plays a subordinate role. Of course, connections – as between component and circuit board, plugs and line junctions – are stressed mechanically as well. These stresses have to be qualified according to sweep cycle/frequency aging approval tests, so that usage times from 20 up to 25 years can be modeled, implemented and verified.

Life cycle costs are often underestimated. These also include costs – as the requalification for second source components, for example – that will occur in case the initial supplier fails for whatever reason. In order to keep these costs as low as possible, the vehicles’ components are subject to very high requirements. The EN50155 standard (railway applications – rolling stock – electronic equipment) is the relevant set of rules for this purpose that describes the entire requirements. Speaking of voltage converters, a lifetime up to minimum 20 years (according to life class L4) is expected for a device running from 350 up to 360 days a year and from 16 up to 24 hours a day. Depending on agreement, even longer operating times can be aimed at (according to life class Lx). Nevertheless, each failure and each replacement will cause system costs.

Can we Rely on the Initial Type Testing?

Let us draw attention to an interesting fact that often goes unrecognized: The proper behavior of an electrotechnical component can change for the worse during lifetime, by drying out of electrolytes used in electrolyte capacitors, for example. Semiconductors’ technical properties are also expected to alter, for example, regarding CTR (current transfer ratio) in optocouplers. Isolation material, circuit boards, plugs including their contacts, are subject to changes in their specified initial values as well, depending on the quality of material and processing (concerning contact resistance, for example). Looking at the topic of EMC leads to the following observation: Interference immunity will decrease over years whereas interference emission will rise on the other hand (see figure 1) and the corresponding specific limit will be exceeded from a certain time on. As a result, significant dysfunction may occur.

Hence, depending on the application, the second glance really matters when it comes to choosing and purchasing devices. Unlike applications in the automotive field that are subject to technical inspections on a regular basis, limit checks concerning electrical devices for railway technology are only required once – as initial type testing. The issue of long-term functionality and compliance with specific limit values becomes thus a matter of trust. With this in mind, not only the instantaneous procurement costs are a decision-making criterion: In view of increasing service life, maintenance and repair costs also come into focus. A purchase that initially appears to be a good deal can easily turn out to be a kind of boomerang, causing significant problems and considerable costs over time.

Failure and Repair Costs: MTBF as a Decisive Factor

For illustrative purposes, we can refer to an example based on real operation: 17,901 units of the same device (here: one of our 100 W DC/DC converters, specified for an input voltage of 42.2V up to 154V and an output voltage of +/- 15V) have been evaluated since 2002. According to the datasheet, the MTBF is 500,000 hours at an ambient temperature of 40 °C (Note: our calculation is carried out according to the guideline SN 29500, which is generally used for MTBF considerations). In total this results in 1,176,000 operating hours related to an average operating time: In this case, we assume 350 days per year at 16h per day. Consequently, the number of expected failures will be 1,807 projected on 5,600 hours per year. However, what we observed in reality: Our devices’ actual MTBF does even remain below the target values we have just considered, proofing that only 140 converters failed or have been complained by customers until the reference date of January 31, 2022. This corresponds to a failure rate of only 0.78 percent.

As an example for a small converter, modeling a failure by calculating with € 75.00 costs for the user and an additional € 75.00 for the manufacturer caused by a repair, results in € 21,000.00 of additional costs related to 140 failed converters, which corresponds to € 1.16 per device considering the total number. Evaluating the benefit in terms of additional costs, let us draw a comparison with a fictitious competitor, whose acquisition costs may be possibly lower, but whose MTBF value may be only half as high. 3,382 failed converters would result in additional total costs of € 597,300.00 for an MTBF of 250,000 hours and thus € 28.34 additional costs per device - provided that the device in question is still able to be repaired. In case a replacement is due, costs will be even higher. Besides, indirect additional costs have not yet been taken into account. Moreover, when transferring the calculation to larger modules with a more complex structure, the maintenance and repair costs will also increase in function of the purchase price. 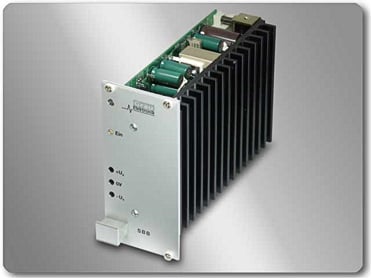 Requalifying a yet licensed component in a railway vehicle will produce immense effort and costs because type testing, including the related certificates (EN50121-3-2 for EMC, EN 61373 for vibration and shock, EN 45545-2 for fire load), has to be performed in the corresponding system environment. Modifying the bill of materials and possibly searching for new suppliers will demand additional resources and staff. Thus, five-digit amounts of additional costs can quickly arise.

Near-term support, advice and qualified assistance when treating technical questions are further decision-making factors. That is where the second glance matters – above all, it pays off long term. Later during operating time, the different applications’ interaction with other system components will often raise questions that require special knowledge: Years of experience in development prove to be a strategic advantage.

As the relevant standards for railway applications set especially high expectations in terms of service life, this article first highlighted the central role of life cycle costs. Based on the initial type of testing, we discussed possible changes in electrical components’ properties and emphasized the importance of high-quality components when purchasing. We introduced the MTBF as a benchmark, illustrated by a practical example emerging from our range of applications. Hence, we underlined the risk of escalating costs in the event of high failure rates and demonstrated how expert knowledge already gains momentum during the development phase.

These findings may also help when it comes to a question that many vehicle manufacturers may ask themselves eventually: Rather develop and product converters in-house or rather purchase externally? Time and cost savings, resulting from years of practice in the development and manufacture of high-availability voltage and power supply systems, should not be underestimated. If someone has already invested many years in acquiring specialized knowledge in the field of converter topology, in optimizing the design of corresponding devices, and in setting up specialized production sites, his leading edge can only be caught up with immense effort. In many cases, this additional effort ultimately will not pay off for an in-house project - so it is worth consulting the specialist.