Most technology nearing 150 years old is ready for a refresh. So it goes with the Hall Effect. Today, these sensors have hit the ceiling of their capabilities, forcing system designers to look to new technologies for increased requirements around power consumption, sensitivity, accuracy and cost.

Electric Vehicles magazine notes that with Hall, “voltage produced is downright miniscule, even in special semiconductors made for the job...”

EVs are one of the primary use cases rapidly driving the requirements for better performing, more efficient sensing technology. 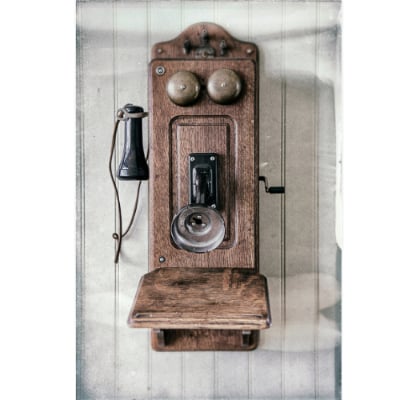 This is what a phone looked like in 1879. Image used courtesy of Bodo’s Power Systems

Two technologies have been developed to fill the gaps in the Hall effect. First was AMR (Anisotropic MagnetoResistance) effect, where the spin of electrons was seen to increase or decrease their scattering probability with magnetized material. The limitation of this technology is the MR effect, which the change in resistance from its maximum to minimum values, usually limited to a 5% change. The result is failure around accuracy, sensitivity and signal/noise requirements.

The next, more recent, solution, Giant MagnetoResistance (GMR) was developed in 1988. With GMR, the bulk resistance of alternating layers of magnetic and non-magnetic materials changes in proportion to magnetic field intensity. The main advantage of GMR is higher sensitivity – so it is capable of measuring lower currents accurately – but it also struggles with signal/noise ratio and relatively few manufacturers offer current sensors based on GMR.

We know that the Power Factor (PF) of a power supply is technically the ratio of the real power consumed to the apparent power (Voltsrms x Ampsrms). The PF, much like the supply’s efficiency rating, determines the amount of useful power a switch mode power supply can draw from the AC line and then deliver to its output load.

Besides being required by International regulations, Power Factor Correction is extremely valuable in that it can supply higher output load currents and more accurately measures the full dynamic range. It significantly reduces the AC current harmonics, leaving mainly the “fundamental” current frequency that is in-phase with the voltage waveform. A TMR Isolated Current Sensor simplifies the architecture, enabling a single solution to meet performance requirements.

Traditionally, Active Power Factor Correction is inserted between the line and the main converter, a pre-converter draws a sinusoidal current from the mains and provides a dc voltage.

In these traditional PFC designs, average inductor current is required for the current control loop, typically a shunt ( voltage drop across a resistor) is placed in the ground line to sense current. In contrast, the totem-pole PFC design has no ground line and now requires an isolated current sense measurement. With totem-pole PFC, half of the diode bridge is replaced by active switches (S1 and S2.) This high frequency half bridge employing GaN. The other half of the diode bridge is replaced by switches S3 and S4 that are a line frequency leg with synchronous MOSFETS. The result is significantly improved efficiency and lower part counts.

According to Crocus, developer of the most advanced magnetic TMR sensor technology solutions, an XtremeSense™ TMR sensor is the ideal solution for isolated current sensing in these applications, delivering the highest sensitivity, the widest dynamic range, the lowest power consumption, and the best stability over temperature.

The proof is in the results: by using XtremeSense™ TMR instead of the Hall effect, the CT43x family can deliver performance achieved only by very expensive, closed-loop current sensors.

Historically, we had to make choice between these two. Due to Hall Effect technical limitations, closed-loop current sensors were developed to achieve performance, but proved to be cost prohibitive. Open-Loop added compensation algorithms and heavy calibration to improve performance, but still remained subpar to closed-loop systems.

Some Hall Effect sensors include a ferromagnetic core without the coil around it to approximate a closed-loop feedback circuit. The core focuses the magnetic field on the Hall Effect sensor, improving overall SNR and shielding against external magnetic fields. Unfortunately, it is susceptible to magnetic hysteresis, saturation and bandwidth issues. These sensors are bulky and offer mid-range performance.

Linearity and Accuracy of TMR Technology

Conversely, XtremeSense™ TMR technology is inherently linear, making the CT43x able to be used without any end-of-line calibration from the user. (It is calibrated to match the figures of gain and offset found on the data sheet.)

Signal to noise ratio, maybe the most important consideration in sensing solutions, is dramatically improved with XtremeSense™ TMR: the CT43x resolves down to 15 mA over its 1 MHz bandwidth. This provides higher sensitivity allowing a simpler amplification circuit design. Since the CT43x doesn’t include a “chopper circuit” the voltage noise spectral density shows a 1/f noise characteristic. The integrated noise over a 100 kHz bandwidth is an impressive 9.8 mA.

CT43x, the XtremeSense TMR contact sensor, offers ultra-low noise and low error measurement, and excels in bandwidth. Thanks to the TMR’s low noise and linear response, CT430 is a differential current sensor with 1MHz bandwidth, 300ns response time and less than 1% total error over temperature. The intrinsic sensitivity of TMR has produced the lowest noise technology on the market, resulting in industry-leading resolution numbers such as:

XtremeSense™ TMR can reach higher bandwidths, but the CT43x is optimized for a 1 MHz operational bandwidth. At the same time, the response time is less than 300ns (typical.)

In contrast to the Hall Effect, the XtremeSense™ TMR signal-tonoise ration combined with its planar axis of sensitivity allows for an easier die placement and a greater distance between die and current.

Many research teams have demonstrated TMR junctions in their labs, yet few have moved this technology into full-fledged products. Crocus Technology does not own a CMOS foundry. It operates as an IP provider, offering any foundry the ability to incorporate TMR technology into their portfolio.

Specifically, Crocus has successfully overcome traditional barriers – around manufacturing, reliability, performance and cost – to bring TMR to commercial production. Bottom line: This enables mass market adoption of a product that is superior to Hall in performance and pin-to-pin solutions. And finally, it replaces the resistor shunt with smaller, more efficient solutions and the CT with a smaller, more efficient product.