The fast-starting single channel high-side switches feature a power on delay of 60μs or less at start-up.

The IPS160HF and IPS161HF are monolithic devices that can handle 2.5 and 0.7 amps, respectively, over an 8 to 60 volt range. The units feature a RON of 60 mΩ, and are suitable for operation with resistive, capacitive, or inductive loads with one side grounded. 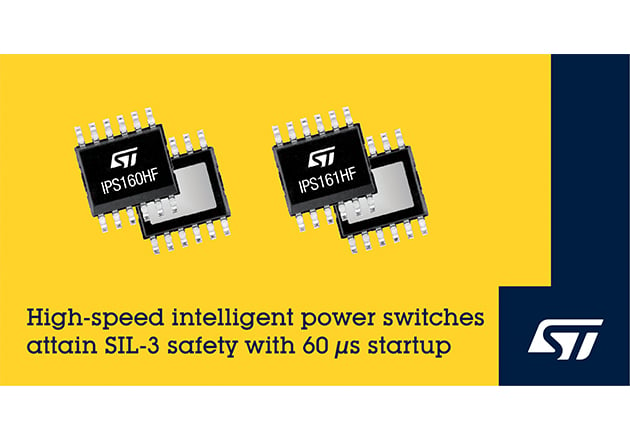 Both devices feature built-in thermal and overload shutdown protections that serve to guarantee the IC, as well as both the application and the load against any electrical and thermal overstress. And, in the event of a short circuit, a low-dissipative short-circuit cut-off protection regime is in place to limit output current, which serves to prevent the device overheating that would otherwise result.

Both devices feature a dedicated diagnostic open drain pin that serves to report an open load in OFF-state, an overload cut-off or thermal shutdown.

The IPS160HF and IPS161HF feature an N-channel power-MOSFET output stage that switches load current far more quickly than a classical filament fuse can. As explained, they can also protect circuitry from an array of power mishaps and not just overcurrent. This output phase is reusable, animated by driver circuitry which is itself controlled by a complex logic interface. 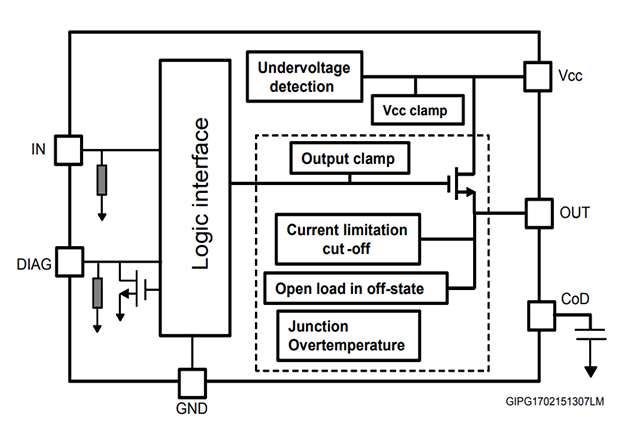 Because of this, devices such as the IPS160HF and IPS161HF can be thought of as more than fuses. They are intelligent switches, and now supplant old-style fuses in their former role as the protection of electronic circuits.

These  new intelligent power switches feature protection from ground and VCC disconnection, undervoltage lockout and from excessive heat. In addition, a means is provided, through a dedicated diagnostic pin, of informing the controlling MPU of the cause for any disruption of power to the load.

There is only a short propagation delay (< 60 μsec) at start-up, and cut-off delay time is user programmable.

In addition, the units provide for fast demagnetization of inductive load, which does expose it to significant thermal and electrical stress. The illustration below charts the energy, in millijoules, that the devices can tolerate in a single demagnetization pulse. Conditions are VCC at 24 volts and an ambient temperature of 125 °C. 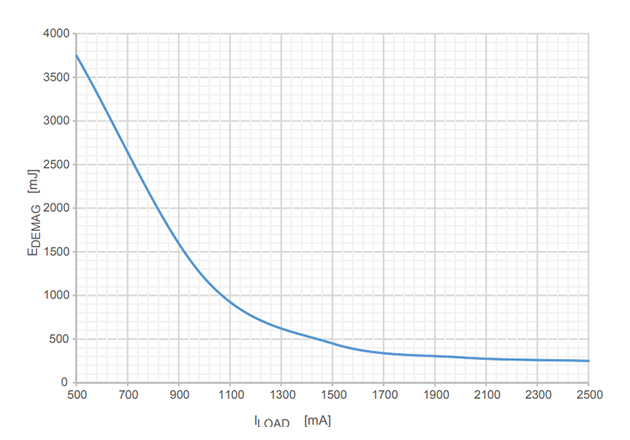 Typical single pulse demagnetization energy with VCC at 24 volts and an ambient temperature of 125 °C. Image courtesy of IPS160HF and the IPS161HF datasheet.

In the event of a necessity for higher demagnetization energy, external free-wheeling Schottky diode can be employed.

Both devices are designed to meet IEC 61131-2. They are available in PowerSSO12 packages. Junction temperature range is from -40 to 150°C.

These devices are available in various grades of ST’s ECOPACK specifications, depending on the level of environmental compliance that is called for in a specific application.