In the standard discrete packages of power semiconductors, application specific topology needs are not taken into consideration. On the other hand, power modules, typically incorporate a full topology but feature complex package handling requirements. The advanced isolated packages from Littelfuse such as SMPD fill the gap between modules and discretes, offering the performance of the power module with the flexibility of discrete devices.

SMPD stands for Surface Mount Power Device, the advanced top-side cooled, isolated package pioneered by IXYS, now part of Littelfuse, back in 2012. As displayed in Figure 1, having the size of a two Euro coin, the SMPD offers several key advantages:

The SMPD is a revolutionary package that simplifies how design engineers address their power semiconductor system integration and assembly. They are available in standard topologies such as buck, boost, phase-leg, or even customized combinations. They are available in a variety of technologies such as Si/SiC MOSFET, IGBT, Diode, Thyristor, Triac, or customized combinations with different voltage classes from 40V to 3000V. 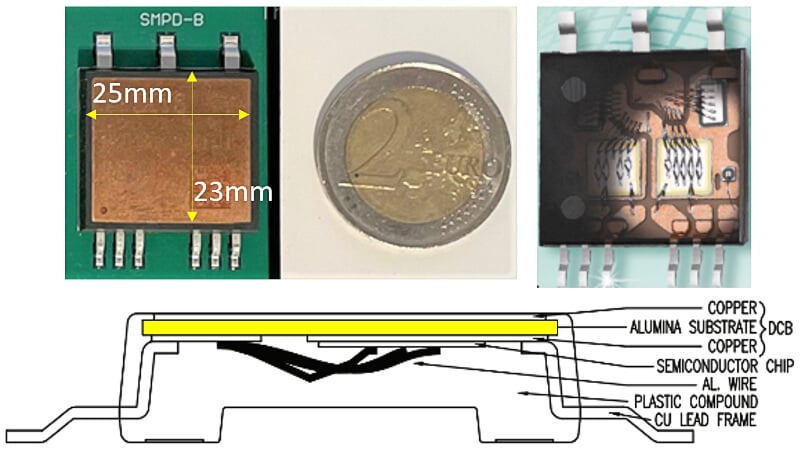 Dynamic measurements were carried out between the silicon carbide (SiC) MOSFET-based SMPD and standard discrete packages to quantify the advantages Littelfuse SMPD can offer. The measurement principle is based on standard double pulse test setup, as depicted in Figure 2, and the dynamic characterization platform from Littelfuse was used to conduct tests. The devices have been compared in terms of MOSFET switching parameters such as switching time Tsw and switching energy Esw as well as the diode switching parameters such as reverse recovery time trr, maximum reverse current Irm, and reverse recovery energy Err.

The measurement waveforms of gate voltage, drain current and body diode reverse recovery current are given in Figure 4. The gate voltage comparison reveals, that the SMPD with kelvin source not only speeds up charging of gate but also due to its low package inductance, it eliminates the gate oscillations at same operating conditions. The drain current comparison during turn-on reveals, that the TO-247-4L and TO-263-7L devices have about 25% higher peak current despite having similar channel resistance RDS(ON) and similar technology MOSFET dice. Consequently, these devices may experience more stress to the body diode due to higher values of maximum reverse recovery current Irm. From the body diode’s reverse current comparison, it can be observed, that despite having the same dice in SMPD and TO-247-3L packages, the SMPD offers shorter reverse recovery time with higher di/dt which in turn reduces the losses of body diode and increases overall system level efficiency.

The dynamic parameters are quantified and compared in terms of percentage comparison as can be seen in Figure 5. It is evident from measurements that by far, the SMPD offers significant reduction in all dynamic parameters as compared to standard discrete packages. It is observed that despite having the same dice in SMPD and TO-247-3L package, the SMPD offers significant performance improvements in the application. Assuming an application with 80 kHz switching frequency and 800 V drain-to-source voltage, the SMPD offers 21% switching loss reduction for medium load condition and 18% reduction for 80% load condition. The SMPD loss reduction is more pronounced at medium load compared to all other discrete devices. The performance of TO-263-7L device is on par with SMPD for heavy load condition but the usage of this device usually needs an Insulated Metal Substrate (IMS) PCB which restricts the number of PCB layers, adds complexity in PCB design and includes nearly 50% higher cost compared to a standard PCB. The SMPD, offering kelvin source connections and minimized package-level stray-inductance, optimizes performance, efficiency, power density, and ease of manufacturing with standard PCB. Reflow soldering capability along with simplified thermal design add to the list of benefits. 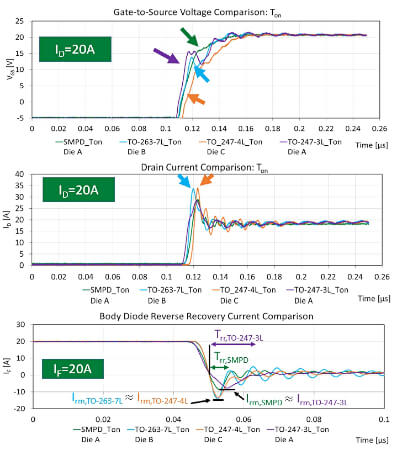 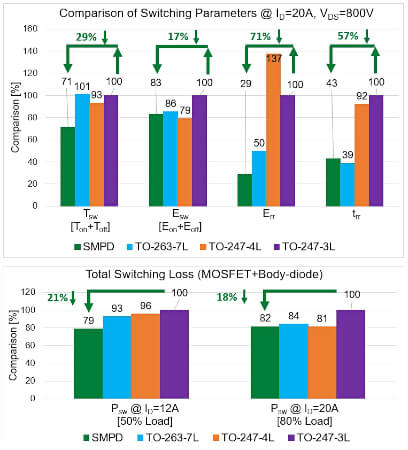 The depiction of SMPD device mounted on PCB with standard load circuit is visualized in Figure 6. 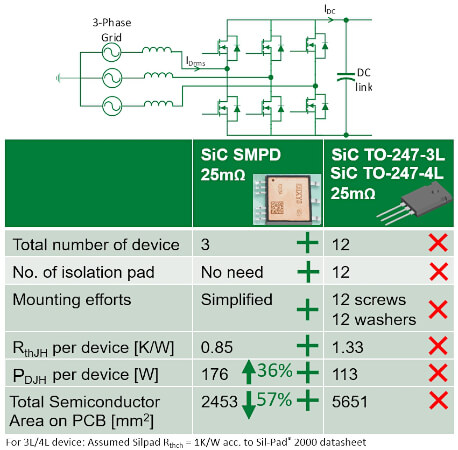 By comparing the Littelfuse SMPD performance to the standard discrete packages, the advantages of SMPD are evident. The usage of SMPD in application reduces mounting efforts, enables space saving, provides DCB-based isolation, increases power density and efficiency along with simplified thermal design compared to the standard discrete packages. The SMPD package furthermore allows integration of sensing elements like, for example, NTC thermistors to enable temperature monitoring of semiconductors or a shunt resistor to measure device current.