The BD9G500EFJ-LA and BD9F500QUZ offer withstand voltages of 39V and 80 volts, respectively, suiting them for operation in 24 and 48 power supply systems. 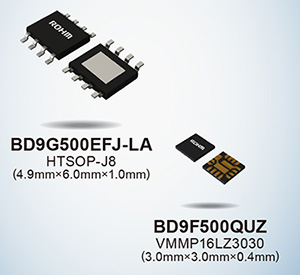 ROHM maintains that the two new buck converters are both “best in their class” devices. The BD9G500EFJ-LA, for example, with its 80V withstand voltage can safely go beyond 48V rail systems to accommodate 60 volt applications such as power tools and electrical bikes. Near competitors include 76 volt devices with 3 amp outputs, and 5 amp devices with only 65 volt withstand voltages.

The BD9F500QUZ can operate at efficiencies as high as 90%, which, combined with its heat-dissipating package, eliminates the need for further heat amelioration. The company claims that, compared to competitive devices, it is 60% smaller and, in typical applications, it will require 35% fewer external parts and take up 85% less total board space.

Both buck converters feature the built-in protections that designers have come to expect, such as:

The recommended input range for the BD9F500QUZ is from 4.5V to 36V. This unit can supply output voltages ranging from 0.6 to 14V, subject to the condition the output voltage must be less than 0.8 times the input voltage.

The device is a synchronous buck DC/DC converter with typical high-side and low-side FET ON resistances of 40 mΩ and 22 mΩ, respectively. It features Constant On-Time control, enabling fast transient response.

The converter features a soft start, which serves to slow down the rise of output voltage during start-up, preventing overshoot. It also serves to prevent the excess inrush current. A typical soft-start time of 2 ms can be increased via an external capacitor.

Applications for the BD9F500QUZ include:

The BD9G500EFJ-LA accepts voltage inputs over a recommended range of 7V to 76V and can tolerate 85 volts, 1-millisecond pulses with a duty cycle of 50% or less. The output voltage can be set to as low as 1.0 volt, and to as high as 97% of the input voltage.

The typical high-side MOSFET ON resistance is 100 milliohms, with typical shutdown current specced at 0µA

The BD9F500EFJ-LA also features a soft start, rated at a typical 20 milliseconds

The switching frequency can be set to between 100 to 650 kHz.

Applications for the BD9F500EFJ-LA include: