Are Hybrid Transducers the Future for Power Converters with SiC MOSFETs?

Are Hybrid Transducers the Future for Power Converters with SiC MOSFETs?

Markets are expected to open up for sensors capable of delivering response times as low as 100ns and unprecedented cut-off frequencies above 1MHz. Much of what many operators in the industrial world are looking to achieve in terms of sustainability and productivity gains revolves around having the most efficient power converters. Suitable for working in the harshest of environments, including in a wide range of temperatures, the power converter of the future will need to be high-power yet lightweight, quiet, and capable of high frequency operation. Low power consumption will be essential.

The high-frequency requirement and the need to be as compact as possible mean that power converters must incorporate smaller passive components if the benefits of reduced size and weight are to be realized. The trend to move away from pure silicon and increasingly make use of high-frequency silicon carbide (SiC) MOSFETs in high-voltage pulsed-power circuits has made it possible to cut space requirements, reduce costs, boost efficiency and enhance performance. 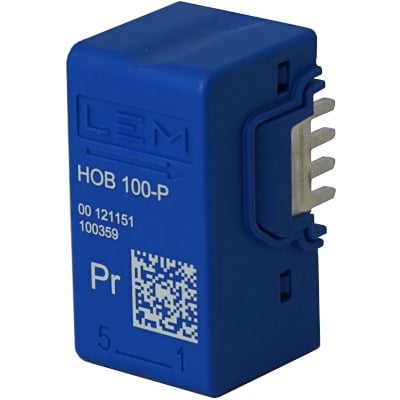 Because of their faster switching capabilities, SiC-based devices are able to operate at bandwidth frequencies that are greater than 100 kHz. This has led to them being used in such applications as uninterruptible power supplies (UPSes), solar inverters, AC variable speed and servo motor drives, power factor correction (PFC), and computer-controlled welding machines.

However, there has always been a trade-off between performance and response time and users in these various market sectors have been struggling for a solution that can satisfy their increasingly demanding requirements. While classic open loop transducers and closed-loop versions are capable of frequency responses as high as 300 kHz, in today’s market these are still not sufficient for the high bandwidth sensing needs that have been driven by the adoption of SiC insulated-gate bipolar transistors (IGBTs).

LEM, the market leader in providing innovative and high-quality solutions for measuring electrical parameters, was approached by a customer in the welding sector, for whom existing response times and frequency responses on their power converters were proving to be inadequate. It was against this backdrop that LEM developed a hybrid transducer that more than trebled the performance levels of anything else on the market.

The hybrid is a mix of ASIC (application-specific integrated circuit) and DC-based transducer with a pure inductive coil to speed up the signal. Thanks to the pick-up coil on LEM’s ASIC, the transducer is capable of reacting like a current transformer. While existing AC transducers based on a pure coil can achieve higher levels, there is no DC transducer featuring open loop technology and a pick-up coil that can perform at bandwidths above 1 MHz – until now.

The LEM solution – the HOB family of around 20 low power consuming multi-range current sensors capable of measuring DC, AC or pulsed current up to 250 A – was developed to meet high bandwidth sensing targets when using fast-switching SiC MOSFETs in high-voltage pulsed-power circuits where rapid and flexible high-voltage pulses are essential. The customer specifically wanted a top-performance solution that delivered rapid response reaction times and expanded bandwidth, all in a smaller footprint.

While a closed-loop sensor would ordinarily represent a high-cost option for any sector wanting to achieve these goals, LEM expects its hybrid transducer to become rapidly attractive to a range of markets that are looking to adopt any kind of switch-mode converters based on SiC and GaN (Gallium Nitride) wide band gap (WBG) power modules. The growing trend to switch-mode converters is being driven by the need for devices and equipment to be as small as possible and to achieve superior power/weight ratios.

Thanks to what LEM calls “a totally different semiconductor technology”, SiC or GaN very high-speed transistors not only ensure faster switching times but also offer higher frequency capabilities and higher voltage withstanding. The company expects that this transistor technology will become the norm in just five years.

Far more important than bandwidth frequency in the HOB family, however, is response time – the time between the primary current and the output on the transducer. This was a key factor for LEM’s customer who was aware that transistors that are switching faster and faster must have a current transducer able to follow the di/dt (the rate of change of current) as closely as possible.

Response Rate as Little as 100 ns

Traditionally, while the di/dt could be as high as 500 A per microsecond (possibly even 1 kA/us) with this technology, the response time on other transducers was around 1.5 microseconds. For its customer, LEM was committed to providing a guaranteed response rate as fast as 200 nanoseconds. Not only was this target met but it was exceeded, with the new HOB and its pick-up coil offering 150ns response time (10 times faster than anything else on the market). In some instances, the response rate was as little as 100ns.

The models within the HOB family offer nominal currents of 50 A, 75 A, 100 A and 130 A, with currents at maximum power (Ipm) of 2.5 times those figures. The special (SP) models in the range are custom-designed to meet individual user specifications but all of them have a cut-off frequency (at -3dB) of above 1 MHz. The standard HOB family of transducers has a 5V power supply (with voltage reference of 2.5) but other models have power supplies of 3.3 V, 3.4 V and 3.5 V. All are capable of operating in temperatures from -40 °C to +105 °C.

Among the other features that put the HOB sensor ahead of its competitors include galvanic separation between the primary and secondary circuit, an integrated busbar and an innovative design that enables space-saving THT (through-hole technology) PCB mounting.

The Future of Hybrid Technology

With a footprint the same as previous transducers on the market, the hybrid transducer is based on technology that LEM has provided successfully in the past for the automotive sector. However, thanks to its improved compactness and superior performance levels, LEM expects the technology to spread out into other domains as transistor production costs come down, automation increases and volumes rise.

The future for this new hybrid technology is expected to be assured when the market grows for very low cost, excellent performance, high response time applications. Some of the extremely demanding applications that are perfect for LEM’s new HOB unit include hand-held plasma cutters, welders and DC-DC converters, as well as the previously mentioned UPS market, switched mode power supplies, AC variable speed and servo motor drives, and static converters for DC motor drives.

Already, LEM is receiving requests from customers for a PCB-mounted transducer offering nominal currents of 300 A, 600 A and more. While it is difficult to work out exactly how quickly demand will move, LEM has put itself in a position where it is now ready to provide a large number of markets with an open-loop multi-range current sensor that combines unprecedented response times and frequency bandwidth with reliability, low power consumption, low noise and enhanced immunity to the dv/dt (acceleration) issues that SiC power modules can be prone to.