RECOM Adds to its Line of DC/DC Converters with 0.5W and 1.0W Units

RECOM Adds to its Line of DC/DC Converters with 0.5W and 1.0W Units

With the addition of the R05C05TE05S and the R05CTE05S, RECOM has expanded its offerings of DC/DC converters. Because the two new units, both available in SOIC-16 packages, have no minimum load requirement, they are well suited for applications that feature low-power operation modes. 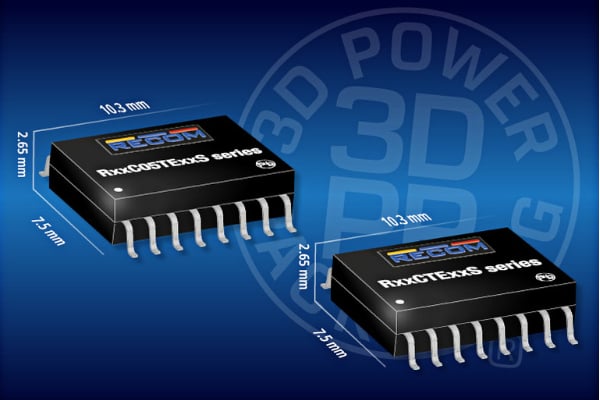 Both devices feature an operating temperature range of from -40°C to +125°C. Over this range, there is no change in line and load regulation specifications, nor is there is also any power output derating. The units feature a one-minute 3kVDC (basic) insulation rating with an isolation capacitance of 7pF.

As stated by Matthew Dauterive, DC/DC product manager of RECOM, “These new DC/DCs are a low-cost alternative when all the features of our higher spec SOIC-16 parts are not needed”. He goes on to state that, “Even so, they still are manufactured with the same automated process with advanced transformer fabrication technology for the highest reliability in critical applications”.

Even at a lower cost, RECOM maintains in the announcement that the 0.5W R05C05TE05S and the 1W R05CTE05S offer “EMI levels are also particularly low compared with more expensive competing products.

Features Common to Both DC/DC Converters

These devices offer the protection features designers have come to expect, including input under-voltage short-circuit, over-current, and over-temperature protections. They also offer more than 8mm of input and output creepage and clearance, which renders the units well suited for applications demanding top-notch levels of robustness and reliability.

It should also be noted that the DC/DC converters are pin-compatible with each other, making effortless upgrades (or downgrades) easy for designers. There is also partial pin compatibility with RECOM’s R05CT05S, a device with higher specifications than the two devices introduced today, including reinforced isolation and remote on/off.

Specification common to both units include: