According to the company, the triple-hybrid system enables optimal stabilization control. The system's primary advantage is its ability to stabilize the highly variable output of renewable energy by combining three types of power sources.

Together, the system allows for high-efficiency, low-cost power supply from an environmentally-friendly, multi-purpose distributed generation system.

The product name "EBLOX" reflects the combining of multiple types of energy (E) together like blocks, with "BLOX" also incorporating the sense of building the social infrastructure. The control system "COORDY" expresses the idea of an energy coordinator.

Power derived from natural energy is highly sensitive to fluctuations in weather or other factors (variable renewable energy), so the higher the proportion of such energy, the greater the volatility in the power supply output.

The triple hybrid power supply system efficiently uses MHIET's core technology to manage this volatility. The fluctuating power from variable renewable energy is absorbed in the storage battery to level the supply. Diesel or gas generators provide backup power that is unaffected by changes in the weather or the time of day. 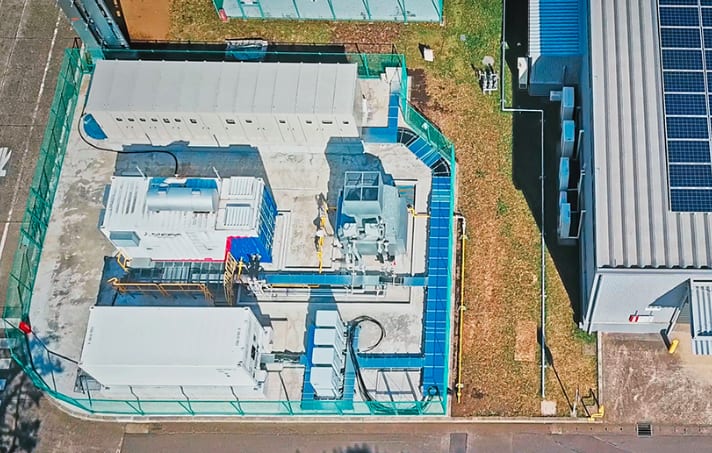 The energy control for the power supply system manages the diverse power sources to optimize the operation of the components, thereby reducing the operational cost.

In addition, the storage battery inverter offers a stabilizing capability that can cope with load imbalances or sudden changes occurring during parallel operation of the power source mix.

Furthermore, in the case of parallel operation with the grid, the company says that utilizing the storage battery's quick discharge and charge function allows the double- hybrid system of a generator and battery to provide shorter power feed times and the frequency containment reserve capabilities that will be necessary for the balancing market in Japan.

The Triple Hybrid Power Station is comprised of a 300kW-class solar power generating facility, a 500kW/0.5hr storage battery, a 500kW gas-powered generator, auxiliary equipment, and the control system. All the power generated is used within the factory. For various off-grid operations testing, the station is also equipped with a variable load resistor that allows separation from the power system line.

Notably, many areas around the world cannot be reached by power company transmission and distribution networks, and such areas need simple, stand-alone power generating systems. At the same time, stand-alone distributed power supplies are increasingly being adopted to cope with natural disasters such as earthquakes and flooding.

By offering a hybrid power generating system (EBLOX and COORDY) with the ability to stabilize highly variable renewable energy sources and meet these needs, the company indicated that it could enhance the added value of renewable energy, and contribute to the realization of a low-carbon society.