A new lithium-ion battery storage facility is one step toward a goal of 100% renewable energy for the state by 2033.

Rhode Island generates more electricity from natural gas than any other state—in 2020, it accounted for about 89 percent of the state’s generation capacity. The remaining 11 percent came from a combination of wind and solar, in addition to small amounts of biomass and hydroelectric generation. 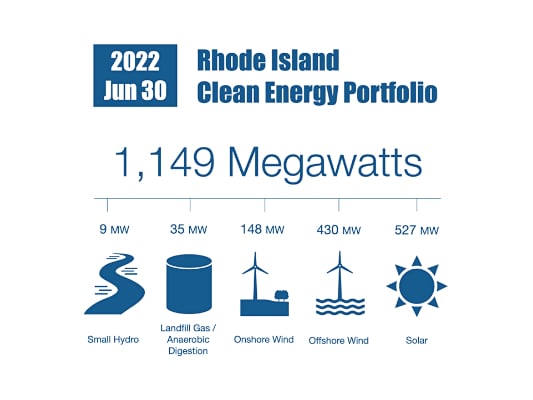 Renewables, by their nature, tend to be intermittent—electricity is only generated when the wind is blowing or the sun is shining. That means a method of storing excess electricity is required to build a stable and reliable grid.

Various storage systems are becoming available, including the use of large numbers of lithium-ion batteries that can directly store electricity during peak generation periods and return it during the evenings or when the wind isn’t blowing hard enough to supply the entire grid. Lithium-ion batteries can also support the existing grid by providing extra power during peak demand periods—a task most frequently handled today by natural gas-powered peaking generators.

Agilitas Energy partnered with PUD to build and operate the 3-megawatt (MW)/9-megawatt-hour ((MWh) facility in the town of Pascoag, RI. Agilitas has other battery storage projects, totaling more than 70 MW in Massachusetts and New York state.

“I am proud to announce that Rhode Island continues its leadership on clean energy innovation by installing the state’s first utility-scale battery storage system,” said Governor Dan McKee in a news release from the Governor’s office. “This battery technology, which allows for the storage of energy and deploys it when it is most needed, is a vital link in our state’s transition to a 100 percent clean electricity grid by 2033. Pascoag is setting a great example for others to follow.”

“Rhode Island deserves energy that relies on our state’s natural beauty, not energy that destroys it. These new batteries are a step towards ensuring that every community, from Pascoag to Providence, has access to clean, green energy,” said Lt. Governor Sabina Matos. “I’m hopeful that we can continue leveraging our state’s resources to build a more resilient and renewable power grid.”