SAMWHA announces the availability of hybrid capacitors known as BATTERYCAPs with a capacity of 70,000 farads.

With the new ESD-SCAPs, the Korean manufacturer SAMWHA sets the bar high in the field of capacitor energy storage. For the first time, the hybrid capacitors known as BATTERYCAPs are available with a capacity of 70,000 farads. "With the ESD-SCAP, SAMWHA presents a hybrid capacitor with the form factor of the EDLC or ULTRACAPs commonly used up to now, at the same voltage level of 2.8V. Its energy density is thus incomparably higher", says Rainer Hake, Managing Director of CAPCOMP GmbH, where the new energy storage devices are now available on the European market for the first time. The high energy and power density of the ESD-SCAP combined with the long service life open up completely new areas of application. 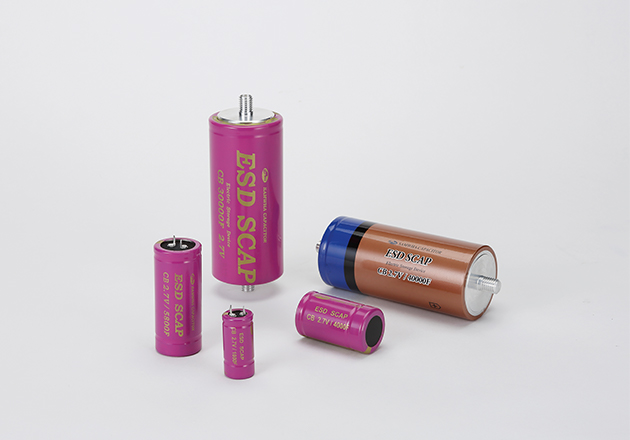 The high capacity of the new BATTERYCAPs allows applications where the classic ULTRACAP or Lithium batteries are not practical. One possible area of application, for example, is self-sufficient lighting systems that are charged during the day using solar cells and then act as a light source at night. The LED illuminants used today allow high luminous intensity at low power consumption and are therefore ideally suited for operation with the ESD-SCAP.

The technology behind the hybrid capacitors themselves has been known in the market for many years, but they are being used more and more often, especially in recent times. Due to their high capacitance values, they are used particularly in applications with a low number of cycles, such as in UPS in industrial control systems. With 50,000 specified cycles, they also achieve a very long service life. For example, hybrid capacitors have long been used in aircraft as backups for on-board systems, where lithium batteries are prohibited because of the risk of fire. The high cycle stability, temperature behavior and high power density of the capacitors are far superior to those of conventional batteries.

So far, lithium-ion batteries are still superior to all capacitors in terms of energy density. However, the current 70,000 farads show the way forward in the field of capacitor energy storage. Kwang-Hyun Park, Managing Director of SAMWHA Germany forecasts: "We have been pushing the development of our BATTERYCAPs for some time now, so that the currently available 70,000 farads can probably be increased even further soon. We expect that capacities of up to 100,000 farads will even come onto the market in the foreseeable future". Despite increasing capacitor capacities, the existing products will not become superfluous. Each of the energy storage technologies currently on the market has its own specific strengths and is therefore predestined for certain applications. Developers and system architects in the industry must therefore first and foremost answer the question of which requirement is the decisive one. With the new BATTERYCAPs, however, another strong alternative is now available.

The SAMWHA Capacitor Group is one of the leading manufacturers in the market for passive components, especially for high-quality capacitors such as MLCC and chip inductors. The Korean company is ideally positioned with its products in the environment of digitalization in the electronics and telecommunications industry.

It is not without reason that the capacitor specialist was named World Class 300 Company in 2018. Continuous further developments in quality management and quality assurance, as well as high investments in production and international sales, have led the company to its current world market position.