The fresh gate drivers for brushless DC (BLDC) motors are three-phase and sensorless, and each incorporates a power loss brake and AC-loss features.

Allegro’s new A89331 and A89332 devices, introduced Wednesday, control the fans that cool data center subsystems. Their sensorless control nullifies the need for Hall sensors and their associated components, reducing cost while saving both space and weight. 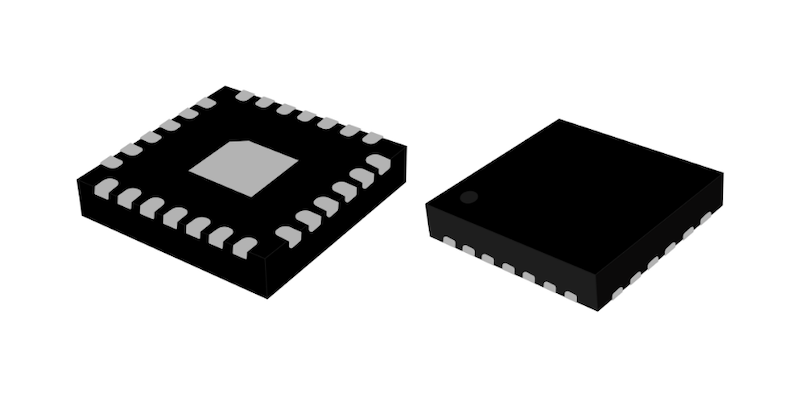 A graphical representation of the A89331 and A89332, housed in QFN packages. Image used courtesy of Allegro Microsystems

The ICs include EEPROMs (electrically erasable programmable read-only memory) that can be used to convey the information needed to control fan speed, allowing designers to avoid programming an MPU (memory protection unit).

The Need for New Driver Chips

“It’s not just about building low-maintenance ‘lights-out’ facilities; server and component designers are looking for new and novel ways to reduce heat and power consumption, and fans play a big role,” Wang said in a written statement. “We’ve been focusing on the data center market for some time, and with the addition of the [A89331] and [A89332], we’re giving them improved control over their cooling systems for maximum efficiency.”

What are Brushless DC Motors?

The rotors in brushless DC motors are populated by permanent magnets; the stators are electromagnets. The stator must provide an opposite magnetic field to the rotor at just the right time to contribute to the rotor’s circular spin. Of course, to accomplish this, the angular position of the rotor must be made known to the stator’s controller.

Previously, Hall effect sensors were used to pinpoint that position. In more modern systems, variation in the stator’s electrical response can accomplish this vital function.

A three-phase brushless DC motor has three pairs of two electromagnets. Power is applied to each pair in the proper “phase” with respect to the rotor’s position.

Gate drivers supply the power to any sort of semiconductor switch, typically MOSFETs. These new Allegro chips are purposed to BLDC circuitry.

Some gate drivers, such as the A89331, are packaged together with the MOSFETs they power. This saves designers from the difficult, specialized task of marrying the driver to a MOSFET themselves.

The MOSFETs incorporated by the A89331 have a capacity of 3 A. 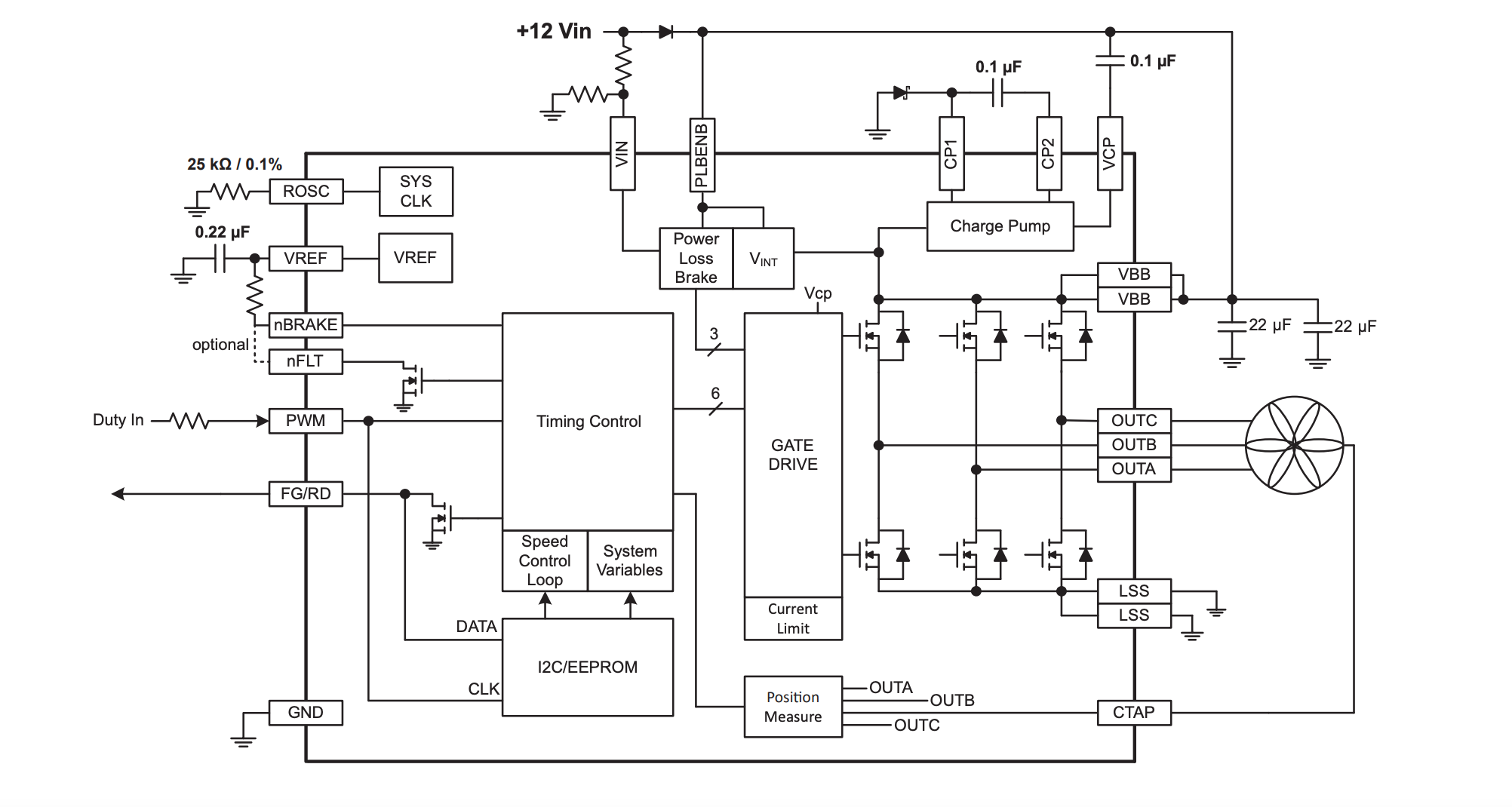 A typical application schematic for the A89331. Screenshot used courtesy of Allegro Microsystems

The A89332 includes a power loss gate function, which comes into play when a server fan malfunctions or breaks. When this occurs, a backflow, or flow of air in the opposite direction, can push the affected fan into reverse rotation. As a result, to maintain the correct airflow for cooling, the other fans in the cooling system have to work harder, wasting power. 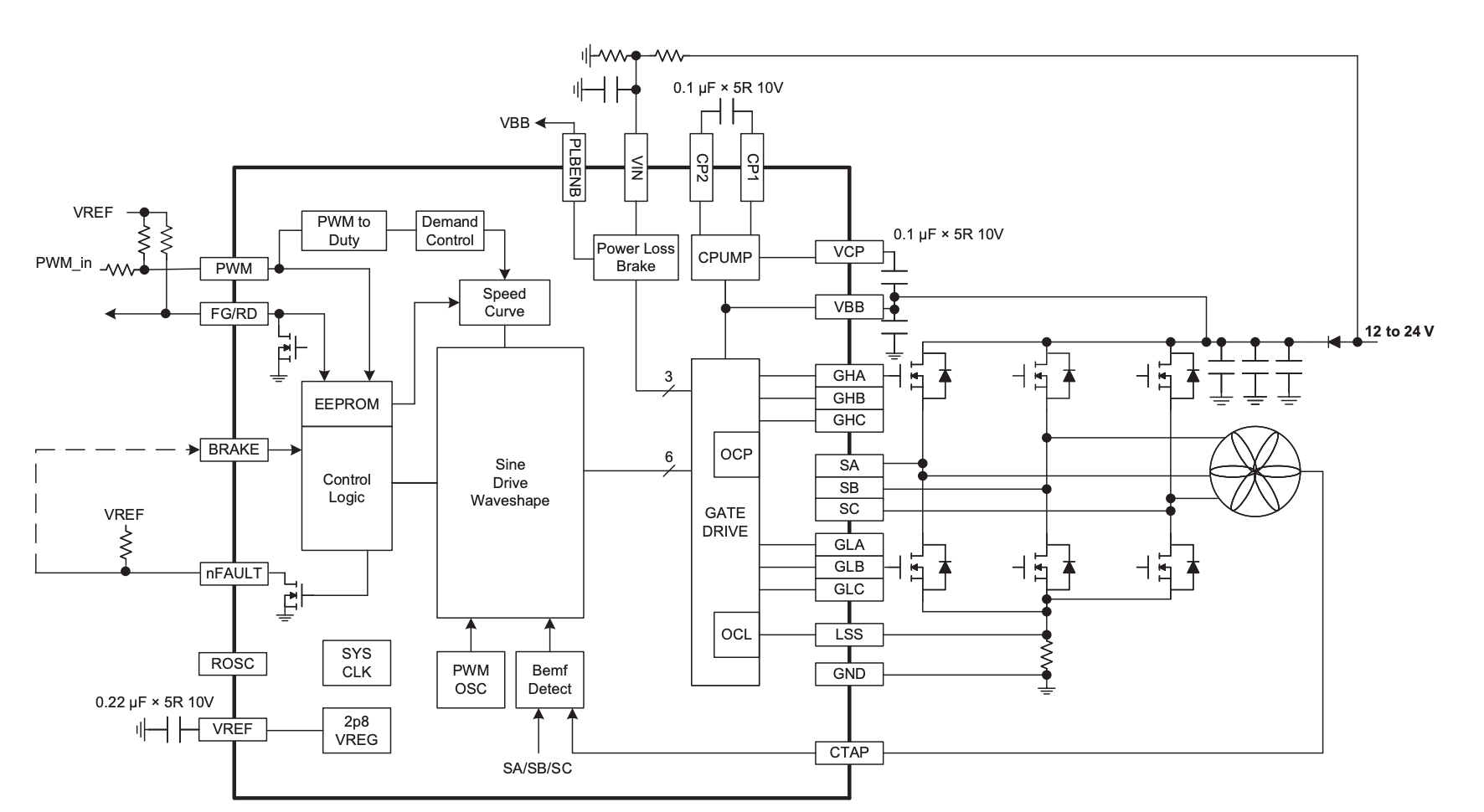 A typical application schematic for the A89332. Screenshot used courtesy of Allegro Microsystems

Traditionally, systems designers have avoided reverse rotation by adding external circuitry and components whose purpose is to stop the compromised fan from spinning. But the A89332 incorporates a power loss brake (PLB) function internally, saving time and board space while easing the design process.

Fan circuitry is often built on donut-shaped boards, with the fan sitting in the donut hole. Because the new chips are alternately offered in 26 (A89332) and 28–contact, 4 × 4 mm QFN packages with exposed thermal pads, they can readily fit into these tight spaces. The chips are specifically targeted at 1U and 2U fans. 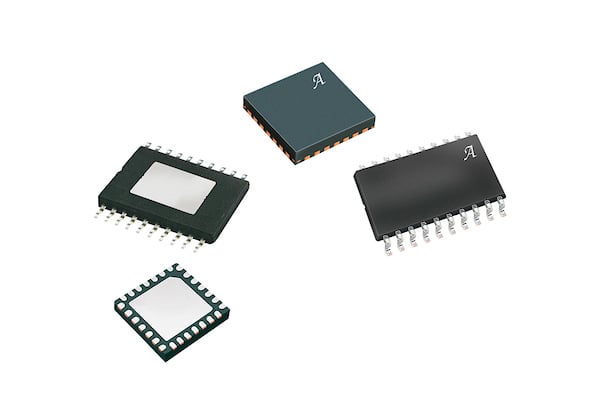 The A89331 is also offered in a 20-lead TSSOP package. Image used courtesy of Allegro Microsystems

The drivers’ QFN packages are free of lead (Pb), with 100% matte-tin leadframe plating. The devices operate over a temperature range of -40 to 105 °C, and the A89331 is specified as RoHS-compliant.