Pre-Switch, Inc. expanded its soft-switching IGBT and SiC gate driver architecture to cover 3-phase power systems. The company says that the platform, including the Pre-Drive™3 controller board, powered by the Pre-Flex™ FPGA, and RPG gate driver board, enables a doubling of power output for a typical inverter, or an increase in switching speed by a factor of up to 20 times.

Hard-Switching is the most commonly-used technique for dc-ac, power converters, but it has numerous disadvantages, the largest of which is the introduction of switching losses. These switching losses are responsible for a large percentage of power conversion losses.

Pre-Switch's forced-resonant soft-switching topology replaces the traditional IGBT or SiC driver with a common intelligent controller board, Pre-Drive3, and a specific plug-in resonant power gate module optimized for the customer's chosen SiC or IGBT package. The company claims that its architecture (see image above) delivers the same switching loss performance or better as a five-level design, but significantly reduces cost, control complexity, and BOM count.

Pre-Switch technology forces an auxiliary resonant circuit to briefly collapse the voltage (or stop current flow) across the target power transistor. This brief collapse or stop results in next to zero overlaps between the current and voltage switching waveforms. (see "Pre-Switched" image below in which a  zero voltage soft-switching waveform shows no overlap in current and voltage).

The company's technology achieves this zero overlap by "Pre-Switching" a separate, small, low-cost transistor (switch) with precise timing. The technology uses a low-cost IGBT to soft-switch high-speed SiC systems. The timing of how and when to switch is learned and adjusted in-system by the Pre-Flex embedded AI chip.

Pre-Flex learns on a cycle-by-cycle basis. The company claims that Pre-Flex effectively guarantees soft-switching, no matter what the topology or changes in input voltage, output conditions, temperature, or manufacturing tolerances. The result, according to the company, is that the target transistor is turned on and off with a 70-95% reduction in switching losses. The variation in switching loss reduction is dependent on transistor type, package inductance and how hard the transistor was being driven prior to being Pre-Switched. 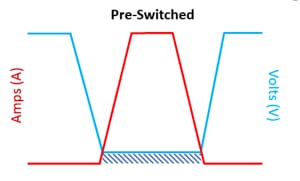 The Pre-Flex architecture reliably enables a shorter blanking period for each transition between the high side and low side transistors in a half bridge compared to hard switching. The shorter blanking period has the effect of producing a higher modulation index at any given switching frequency. These higher modulation indexes give designers a more useful range of the given dc voltage.

Unlike other faster switching transistors, the Pre-Switch asserts that its Pre-Flex architecture enables the selection of any dV/dt and the use of lower cost transistors such as IGBT to achieve the same switching frequencies as SiC and GaN devices. 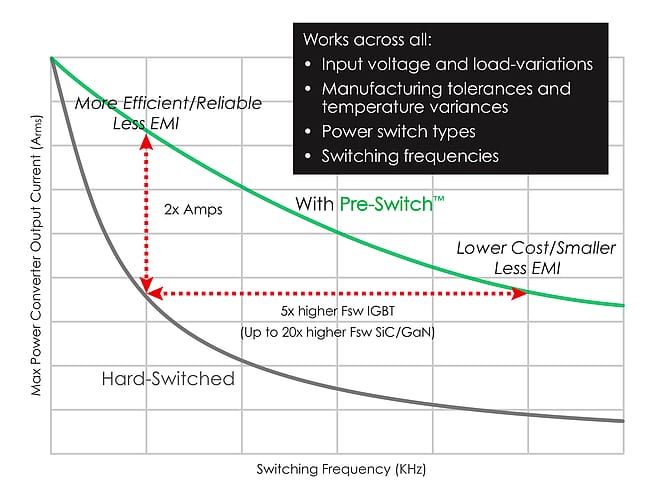 According to the company, Pre-Flex has demonstrated the elimination of 95% of a silicon carbide MOSFET's switching losses and switch that device at 1MHz with industry-leading efficiencies (that's an X-factor of 20).