2000A AC or DC Current Sensor with 80mm Aperture

2000A AC or DC Current Sensor with 80mm Aperture

Applications for the current sensor include the evaluation, design, and development of inverters and batteries for EVs and HEVs as well as power conditioners for solar power systems. The sensor can also be used for power electronics research at R&D labs and universities.

In addition to its ability to measure large currents, the sensor has a wide frequency band and excellent noise resistance, requirements for accurately evaluating inverters used in EVs and hybrid electric vehicles.

Such inverters continue to move toward ever-larger currents and higher-frequency switching. In recent years, manufacturers have been moving large vehicles including trucks and buses to electric drivetrains. This trend creates demand for a current sensor that can measure currents in excess of 1000A. Also, the increasing adoption of SiC and GaN components in inverters is driving increases in power conversion unit switching speeds (on/off cycle speeds) and efficiency, Hioki says.

Therefore, the industry needs current sensors that can measure larger currents with greater precision over a wider band of frequencies and in a broader range of operating temperatures than before.

Last December, Hioki introduced the ac-dc current sensor CT6875 (rated for 500A) and CT6876 (rated for 1000A), which support larger currents and higher frequencies.

The addition of the CT6877 (rated for 2000A) to the line supports a broader range of research and development applications.

Fluxgate Detection measurement method.  The CT method is used to detect high-frequency current, and direct to

low-frequency current is detected with fluxgates.

The device has an opposed split coil in which divided windings are arranged opposite each other on a magnetic core to broaden the range of current detection.

Hioki points out that previously, it was necessary to measure wires individually using multiple current sensors due to the devices' insufficient aperture size and current ratings. However, the optional Sensor Unit CT9557 allows the adding together the sensors' measured values in such setups and outputting the result as a single signal.

Due to its large, 80mm aperture, the CT6877 can accommodate four wires with an outer diameter of 31mm (equivalent to a cross-sectional area of 250mm2). This way, a single sensor can collectively measure wires carrying up to 2000A. 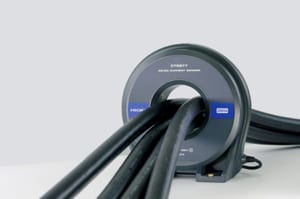 The CT6877 has a dc frequency band to 1MHz, making it among the best-performing pass-through sensors rated for 2000A and making it suitable for measuring currents being switched at high frequencies by SiC or GaN elements.

More robust shielding drastically limits the effects of noise from switching in the high-frequency band to allow an accurate current measurement.

Since the company develops both current sensors and power meters, Hioki can guarantee the combined accuracy of the products when used together for more peace of mind. Used with a high-precision power meter such as Hioki's Power Analyzer PW6001, the CT6877 can measure currents with a high degree of accuracy. 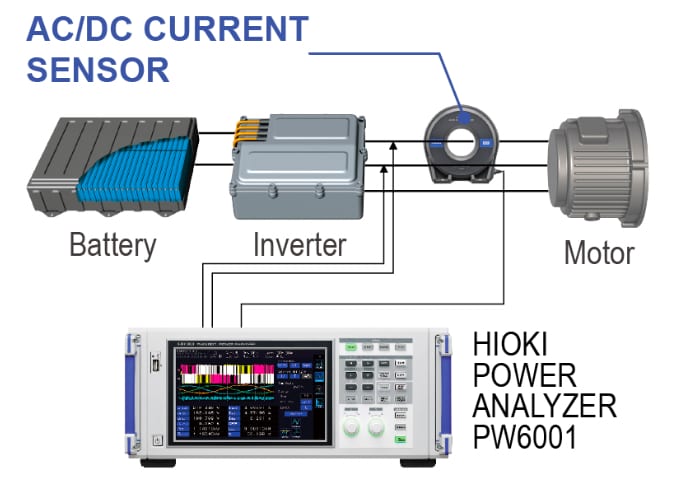