Zero-emission fuel cell improvements could make the technology inexpensive enough to replace conventional gasoline engines in vehicles, researchers at the University of Waterloo claim. The researchers have devised a new fuel cell that they claim lasts at least 10X longer than current technology. They say that this longevity improvement could make fuel cells economically viable, if mass-produced, to power vehicles with electricity.

"With our design approach, the cost could be comparable or even cheaper than gasoline engines," said Xianguo Li, director of the Fuel Cell and Green Energy Lab at Waterloo. "The future is very bright. This is clean energy that could boom." (See image above of Xianguo Li holding a hydrogen fuel cell. Image courtesy of University of Waterloo).

The team initially focused on hybrid electric vehicles, which now have gas engines in addition to batteries due to problems related to their limited driving range and long charging times. Existing fuel cells could, in theory, replace those gas engines.

While hybrid vehicles are in operation, conventional gas engines power generators to recharge batteries, but using fuel cell technologies instead would tend to be impractical because they are expensive.

The design the researchers created makes fuel cells far more durable. This increased durability is a result of them delivering a constant, rather than fluctuating, amount of electricity.

Ultimately, this translates to fuel cells, which produce electricity from the chemical reaction when hydrogen and oxygen combine to produce water, that can be dramatically simplified and therefore far cheaper.

"We have found a way to lower costs and still satisfy durability and performance expectations," said Li, a professor of mechanical and mechatronics engineering. "We're meeting economic targets while providing zero emissions for a transportation application."

The researchers hope the introduction of fuel cells in hybrid vehicles will lead to mass production that results in lower unit costs.  They speculate that fuel cell technology could eventually replace both batteries and gas engines entirely by providing a dependable, affordable, safe, and clean source of electrical power. 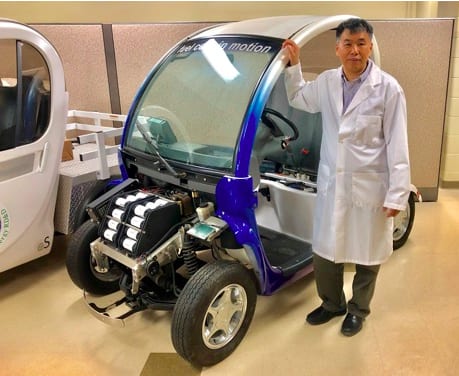 Xianguo Li standing next to a fuel cell test vehicle. Image courtesy of the University of Waterloo.

"This is a good first step, a transition to what could be the answer to the internal combustion engine and the enormous environmental harm it does," said Li.

Their strategic power management scheme used three fuel cell stacks to work only to produce a constant output power,  and they shortened each cell's active time in operation via on-off switching control.

They devised a hysteresis control strategy of power management intended to evenly distribute the active time across the three fuel cell stacks and to reduce the number of on-off switching occurrences. The results showed that the fuel cell durability can be increased 11.8X, 4.8X and 6.9X, respectively.

They noted that this improved fuel cell durability results from the fact that the average power demand of real-time driving cycles is just a fraction of the maximum power that fuel-cell, plug-in hybrid-electric vehicles (FC-PHEVs) could provide.