This article discusses the four exhibitions dedicated to traction batteries for e-mobility and topics relating to charging infrastructure.

With 1,177 exhibitors, 86,000 square meters of exhibition space in 8 halls and around 48,000 visitors from 155 countries, the launch of The Smarter E Europe in Munich was a resounding success. This year, for the first time, the event brought together the two leading energy exhibitions “Intersolar” and “ees Europe” with two new events: “Power2Drive Europe”, dedicated to traction batteries for e-mobility and topics relating to charging infrastructure, while “EM-Power” addressed intelligent energy use in industry and buildings.

The innovation hub for empowering new energy solutions thus put a spotlight on the core issues in the energy world, from renewable energies to decentralization and digitalization to the coupling of the electricity, heating and mobility sectors, over three days from June 20 to 22. A wide range of innovative business models and pioneering projects were presented here and explored in greater depth at the accompanying conferences with 1,800 attendees. 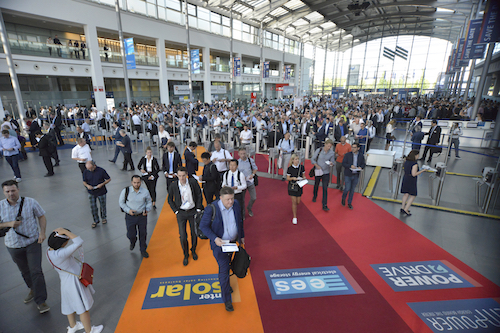 New Exhibition Format was a Hit for Attendees

The new exhibition format The Smarter E Europe met with an overwhelmingly positive response from visitors, exhibitors and partners. The success of the concept was thanks to the powerful dynamic of change, progress and vision created by recent developments in renewable energies, in energy storage and in the interconnection of the previously independent sectors with the potentials generated by digitalization.

Partners of the new The smarter E Europe in Munich were also satisfied with the outcome of the event. “The new exhibition format has been well received by the industry, because the innovation hub The smarter E Europe offers a platform to show how photovoltaic technology is making the modern energy world possible with interconnected systems, intelligent solutions and outstanding hardware,” commented Carsten Körnig, CEO of the German Solar Association (BSW-Solar). “Our businesses are reporting top-level new contacts and excellent deals, which confirms our positive forecasts for photovoltaics and storage systems in 2018.”

Another reason for the success of the debut of the fused exhibitions: The renewable energy market is booming worldwide. In 2017, a total of 310 billion USD were invested in the development of renewable power plants worldwide, whereas just 145 billion USD were invested in fossil fuels and nuclear power, according to the Renewables 2018 Global Status Report by REN21. Around 178 GW of new capacity were installed in the previous year, including 98 GW for photovoltaics alone. This positive development is primarily thanks to falling prices — a pleasing trend that looks set to continue.

In creating the new exhibition format, the organizers made a radical decision in order to be able to fully reflect the development of the energy industry — a major step which has won the approval of the exhibitors. “There are currently two main game changers in the energy industry: The combination of renewable energies and storage systems, and of electric vehicles and charging infrastructure, which are all part of a single ecosystem,” said Leonardo Botti, Head of Global Product Management at ABB. “We’re seeing an upward trend for all of these solutions — the combination of solar power and storage as well as electric vehicle charging devices.”

Inverters have become all-rounders, used not just for converting direct current into alternating current but for analysing and controlling PV installations as well as solar batteries, power-to-heat and smart home solutions. They include interfaces for digital communication and are connected with energy management systems which also incorporate electric vehicles. Inverters owe their growing versatility primarily to digitalization and the new fields of use.

Their diverse capabilities are also reflected in supply figures: 2017 was a record-breaking year, with continued growth of 23 percent over the previous year bringing inverter shipments to 98 GW, according to an analysis by GTM Research. In addition to efficiency currently approaching 99 percent, inverters are gaining entirely new innovative potential all along the energy supply chain.

Digitalization is opening up new fields of use and business models for manufacturers. For example, inverters with an integrated charging function can refuel electric vehicles up to two and a half times faster than traditional charge controllers, while at the same time cutting installation costs by removing the need for additional cables and fuses. The growing digital capabilities of inverters are also being applied in the heating sector, where they are used to control heating elements for hot water production in boilers and buffer tanks, which can be run on excess solar power. And modern PV and battery inverters even fulfill the need for solutions that contribute more to the stability of the grid. Thanks to their energy management qualities, they can supply power as and when it is needed.

At ees Europe, the continent’s largest and most visited exhibition for batteries and energy storage systems, more than 450 suppliers of batteries, energy storage systems, grid infrastructure and solutions for integrating renewable energies were presenting their products and solutions, which are an indispensable part of a modern energy supply. Manufacturers, service providers, project developers, investors, systems integrators and research institutes from all over the world convened here, and leading experts from industry and research discussed storage markets, business models and future technologies in greater detail as part of the two-day conference program.

The boom in renewable energies in the electricity, heating and mobility sectors requires not only intelligent networks but also and especially additional, efficient and cost-effective storage resources. “From private power generators seeking self-sufficiency to utilities looking to offer more power from renewable sources – demand for storage solutions is set to increase yet further in the future,” stated Dr. Holger Hesse, head of the research group on stationary energy systems and deputy head of the Institute of Electrical Energy Storage at the Technical University of Munich (TUM) as well as a member of the conference committee. “Grid connectivity and efficient energy management have taken on new meaning this year in light of the rise of e-mobility in particular. In this context, stationary energy storage has a key role to play in the future of energy supply, not least due to the continued steep decline in the prices of lithium-ion cells and storage systems.”

In battery production and energy storage, efficiency is paramount. In order to meet growing demand, capacity for battery manufacture and assembly must be expanded and costs reduced so that more battery systems can reach the market more quickly. At the same time, the energy efficiency of the components should be increased. Along with China and Korea, European companies are increasingly getting involved in cell manufacturing with the goal of mass-producing lithium-ion batteries – using innovative process technologies and materials. Otmar Frey, Managing Director of the Batteries Division of the German Electrical and Electronic Manufacturers’ Association, sees also Germany as a market participant that should be taken seriously: “The German battery industry has the expertise to produce ready-to-use batteries from lithium-ion cells, for example, to be used in domestic storage systems for photovoltaic installations. Between 2011 and 2016, the German market grew from 1.7 to 2.8 billion euros. These figures offer clear evidence that the market can keep pace.”

The future lies in cross-sector storage projects. As the energy world undergoes a transformation, storage integration and new business models are shaping the market. The presentation series “Business Models or How to Make Money with Energy Storage” discussed concepts for using energy storage that has already proven economically viable. Economic viability is also a key consideration in the recycling of storage devices. The session “Environmental Impacts of Battery Storage: LCA and Recycling” covered this topic.

“The service life of energy storage devices is important not only from a technical perspective but also an economic one, particularly in terms of environmental impact,” said Dr. Matthias Vetter, head of the Department of Electrical Energy Storage at Fraunhofer Institute for Solar Energy Systems ISE and chairman of the ees Europe Conference. The ees Europe Conference explored the financing and safety of storage projects, the quality of the components as well as of overall systems and many other important topics affecting the future of the industry.

The international conferences focused on the topics of sector coupling, digitalization, and decentralization. Experts also discussed the latest trends and developments in the international markets. The conferences of The smarter E Europe as well as the side events attracted around 1,800 attendees this year.

More closely integrating the individual sectors via energy storage systems is of particular interest to the entire energy industry. Sector coupling will continue to grow in importance in the coming years, as is further reflected in the other conferences united under the umbrella of The smarter E Europe. The intelligent interconnection of the electricity, heating and mobility sectors must continue to advance. The digitalization of infrastructure is a crucial lever here — this was also the message of the opening address by Michael Liebreich, the founder of Bloomberg New Energy Finance (BNEF). With the session “New Energy World — Game Changers and Rising Stars”, he introduced the debut of The smarter E Europe Conference.

The “Charging Infrastructure Technology” session at the Power2Drive Europe Conference, for example, was concerned with connecting local charging systems with locally generated power, while the presentation series “New Generation Power Plants/Sector Coupling” at The smarter E Europe Conference took up topics including developments in vehicle-to-grid solutions.