In the field of power electronics for the mobility, industrial, medical, and energy industries, challenged by high energy density, miniaturization, integration, EMC, high robustness and low losses, conventional semiconductors based on silicon are increasingly being replaced by wide band-gap (WBG) technologies based on GaN and SiC. These offer lower switching losses, higher switching frequencies and faster on/off performance, higher junction temperature and lower thermal resistance (through package improvement) and put high demands on the DC link: higher operation temperature; heat transferred to the capacitors via the busbar; higher current density and energy efficiency; miniaturization and suitability for fast transients (dV/dt) and ringing effects.

All this means high requirements on the passive components – particularly the DC link capacitors. Thanks to its competence in materials and design, TDK is able to offer innovative solutions, enabling the advantages of the new semiconductors to be fully exploited.

Design goals for high-frequency capacitors are as follows.

For switched applications in power electronics such as power supplies and converters, WBG semiconductors offer the advantage that they can be operated with switching frequencies in the triple-digit kHz range. At the same time, they feature steep pulse edges, thereby achieving greater energy efficiency. Due to these high switching frequencies, film capacitors are increasingly being used as DC link capacitors. In order to minimize the lead lengths, and thus the parasitic inductances, the capacitors are connected directly to the WBG modules by means of busbars. The problem here is that WBG semiconductors are operated with high barrier termination temperatures, which can also be conducted via the busbars to the DC link capacitors. The temperature limit of conventional film capacitors with a dielectric of biaxially oriented polypropylene (BOPP), however, is only 105 °C.

The problems mentioned call for a new dielectric, like polypropylene (PP) is reaching its limits due to the rising demands of the new WBG semiconductors, especially in high-temperature applications.

TDK has succeeded in developing a dielectric that can also be used continuously at high temperatures. This involves a combination of two basic materials. One component is semicrystalline polypropylene, which is ideal for processing into films (but has temperature limitations); the other one is amorphous cyclic olefin copolymer (COC), which can tolerate high temperatures, but isn´t processable into thin films. The resulting material blend for the dielectric (COC-PP) can be used at temperatures in excess of 125 °C with considerably lower derating while retaining the good self-healing properties of BOPP. In addition, this enables extremely thin films of just 3 µm to be manufactured. Figure 1 shows the significantly improved shrinking and derating behavior of COC-PP in comparison with conventional BOPP. 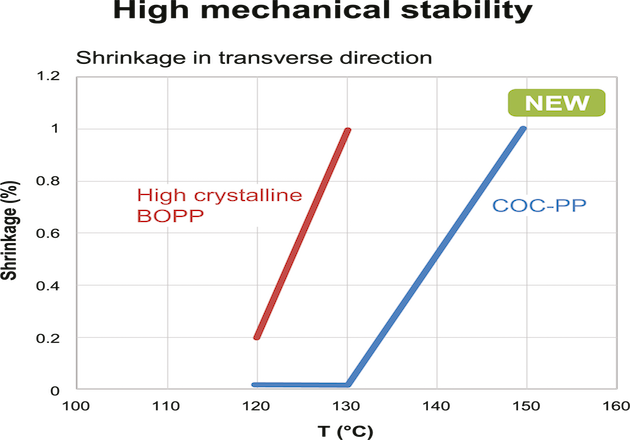 Figure 1: Left: At temperatures of up to 130 °C the new COC-PP material exhibits no shrinkage in a transverse direction. Right: Voltage derating of the new material is also significantly better

Like all capacitors, film capacitors also feature a complex ESR, a series connection comprising an ohmic and a capacitive part. Accordingly, this produces a frequency-dependent resistance that increases sharply as the frequencies rise. This rise is essentially caused by inhomogeneous impedances, skin effects and winding geometries, leading to unwanted resonances and electromagnetic effects. The result is a heating of the capacitor. This has a particularly negative effect if the internal design of a capacitor consists of several windings. Different internal lead lengths and other factors then lead to a pronounced frequency-dependent current distribution across the individual windings, as shown in Figure 2. 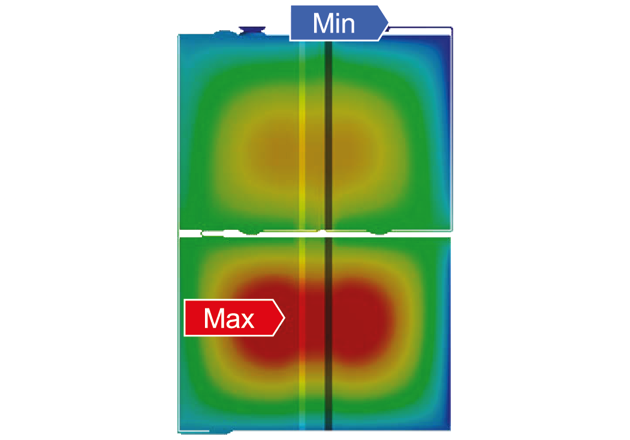 Figure 2: A frequency of 5 kHz produces a significant inhomogeneous distribution of current, and therefore losses, over both windings.

With the aid of CAD and FEA (finite element analysis) simulation software TDK has now developed HF (high-frequency) power capacitors with an optimized internal design. Even at the high frequencies and temperatures at which WBG semiconductors are operated, these capacitors offer high performance with low losses, thanks to a minimized ESR (Figure 3). 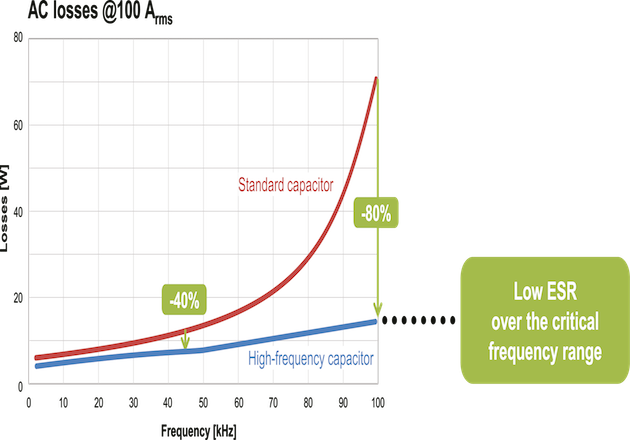 The new B25640 series of HF power capacitors (Figure 4) is especially tailor-made for SiC semiconductors. With rated voltages of between 700 and 2200 V DC and capacitance values from 370 to 2300 µF, the capacitors are suitable for the new generation of converters for traction, industrial drives and renewable energy applications. With the COCPP dielectric the capacitors can also be operated without voltage derating at temperatures of up to 125 °C. One great advantage of the new capacitors is their extremely low ESL value of just 10 nH. This means that, even at high, rapidly switched currents, their voltage overshoot remains very low, so that in most cases they even make snubber capacitors unnecessary. 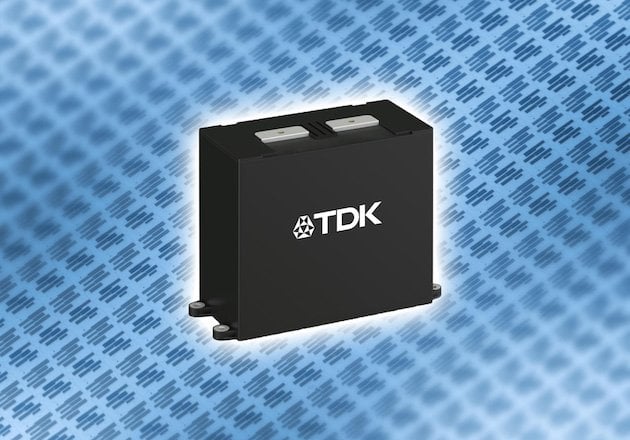 Figure 4: The new HF power capacitors are specially tailored to the requirements of WBG semiconductors.

Roland R. Ackermann (*1934), engineering graduate, technology journalist since 1957. Editor in chief, publication manager, publishing manager of monthly and weekly papers dedicated to electronics, engineering and manufacturing/automation. In addition, between 1970 and approx. 1985 he broadcast the weekly radio program "Der technische Report" for the 2nd channel of the Bavarian state radio station. Freelance journalist since 8/96: he published Elektronik Journal, was editor in chief of Electronik Embedded Systeme and verlagsweltMAGAZIN, and also wrote numerous articles in German and English publications and newspapers (incl. SZ) on technological trends and special topics such as electronics, IT, automotive, automation and bio-medicine technology. He was a regular column writer in "E&E Faszination Elektronik" and a correspondent for "Bodo's Power Systems". Regular translation work from English to German with the focus on electronics. Holds talks at international venues, moderator of panel discussions, event organizer.