Values of Alternating Voltage and Current

Values of Alternating Voltage and Current

Values of AC voltage and current in a circuit may be given as peak value, average value, or rms value.

An AC voltage is described completely when either the peak or RMS value is given along with the frequency of the sine wave. For example, the common value of voltage used in any home in the United States is 120 VAC effective with a frequency of 60 Hz. Since an AC sine wave for voltage or current has many different and instantaneous values throughout the cycle, we need to define the relationships between the different AC values. 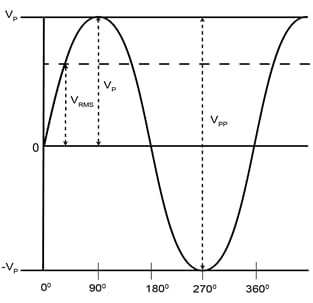 Example: What is the peak-to-peak value of an AC voltage if the positive peak voltage value is equal to 170 V?

Formulas for voltage apply equally to alternating current, with peak current IP and peak-to-peak current IP-P substituted for VP and VP-P. In certain applications, the peak value is the preferred metric when explaining the characteristics of a circuit or a signal. For example, in a bridge rectifier, the filter capacitor charges to the peak of the applied voltage. The deflection of the electron beam in a CRT computer monitor is responsive to the peak-to-peak voltages. Typically, the vertical scale on an oscilloscope is adjusted depending on the peak-to-peak or peak values. 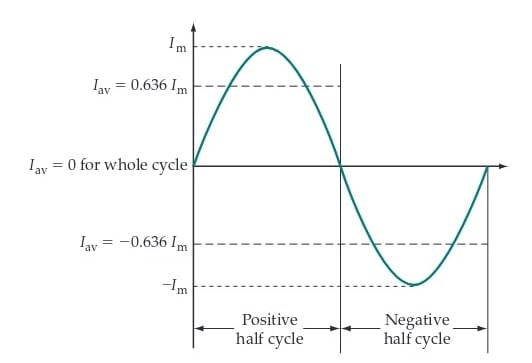 Figure 2. The average value of one half-cycle is equal to the peak value multiplied by 0.636.

VAVG = average value of one half-cycle (in V)

Example: What is the average value of one half-cycle of a sine wave if the peak voltage value is equal to 170 V?

If the half-cycle average value is known, the peak value can be calculated by applying the following formula:

Example: What is the peak voltage value of an AC voltage if the half-cycle average value is equal to 108.12 V?

The RMS value of an AC current or voltage gives us the equivalent DC current or voltage value that produces the same heating effect as the original alternating waveform when applied to a purely resistive load.  For example, an AC current with an RMS value of 1 A causes the same heating effect as 1 A of DC. When AC flows through a resistance, the power dissipated is constantly changing with the AC sine wave. The power dissipated at any instant can be calculated by applying the following formula:

Example: What is the power dissipated in a 4 A circuit with a resistance of 10 Ω?

When calculating the rms value, the peak value of the current or voltage sine wave is divided by the square root of 2. A current sine wave can be calculated by applying the following formula:

IRMS = current RMS value (in A)

IP = current peak value (in A)

Since the reciprocal value of 1.414 is 0.707, the RMS value of a current sine wave can also be calculated by applying the following formula:

When calculating voltage sine waves, VRMS is substituted for IRMS.

Example: What is the RMS voltage if peak voltage is equal to 230 V? 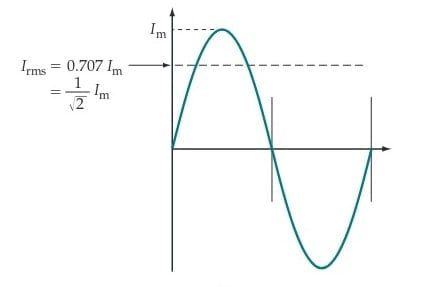 Figure 3. The effective value of voltage or current is equal to the peak value multiplied by 0.707.