Understanding the Importance of Power Electronics in Electrified Transportation

Understanding the Importance of Power Electronics in Electrified Transportation

Learn about the different types of electrified vehicles and how power electronics play an essential role in their proliferation.

In the range of electrified vehicles such as hybrid electric vehicles (HEVs), plug-in HEVs (PHEVs), and EVs, the power electronic circuits act as the connection between the energy sources [2]. Examples include a battery pack and power actuators or traction motors. These facilitate the conversion, transformation, and transfer of electrical power through the powertrain. The major advantage of incorporating power electronic systems is that they are bidirectional and can provide a very high efficiency of >90%. It is also true that these systems undergo complex design and manufacturing processes as they are multidisciplinary and interlink electrical, thermal, mechanical, control, software, and magnetic aspects.

Power electronic systems form the heart and soul of the transportation electrification field. A basic understanding of the operation of power electronic systems is critical and involves gaining a basic knowledge of the switched-mode power converters [3]. The other aspects that need to be looked into, especially in DC-DC converters, include the steady-state operation, analysis, and simulation of the circuits. From the hardware perspective, a good understanding of the power semiconductor switching devices like diodes and switches like IGBTs or MOSFETs is essential. The system modeling has to account for the estimation of losses and efficiency.

DC-DC power converters can be employed to interface the elements in the electric powertrain by boosting or chopping the voltage levels. AC-DC converters are commonly used in PHEVs. A full-bridge DC-DC converter is the most commonly used circuit configuration for power conditioning, especially when electrical isolation is essential. The power converter comprises several components such as power semiconductor switches, gate drivers, cooling systems, inductors, capacitors, transformers, sensors, control boards, mechanical housing, etc. They are integrated and interact with each other to achieve electrical power conversion effectively, efficiently, and reliably. A sample power converter structure is illustrated in Figure 1 [2]. It is important to note that the functionality, volume, and cost of these components affect the characteristics and performance of the power converter. 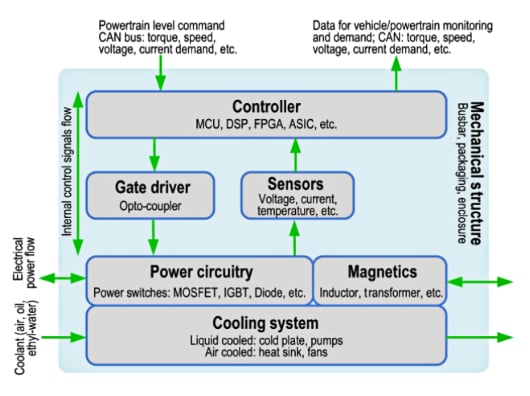 The power semiconductor switches used in automotive applications are mostly IGBTs for systems rated between 200 and 1200 V, and MOSFETs for converters rated at lower voltage like 12 or 48 V. In the last decade, wide-bandgap devices based on silicon carbide (SiC) or gallium nitrate (GaN) have been developed to enhance the performance of power converters. Compared to the conventional silicon-based power switches, the SiC-based devices offer improved switching characteristics, higher voltage operation, and better thermal properties. This translates into lower switching losses and higher thermal conductivity, which in turn reduces the cooling requirements.

The passive components used in a power converter mainly consist of capacitors and magnetic components. Capacitors improve the power quality of the converter by filtering the input and output currents and prevent the ripple component from entering the battery. The passive magnetic components include the power inductors, high-frequency transformers, and chokes or EMI filters. Power inductors are primarily employed in boost converters and battery chargers, whereas high-frequency transformers are used in auxiliary power converters. The design of the magnetic component and the core material govern the size and efficiency of the overall converter.

The cooling system is another critical component that helps with the reliability and power density aspects of the power converter. It prevents the components from operating at a harmful temperature. The heat generated by the losses incurred from the power switches and passive components needs to be evacuated from the module or the component first and then from the power converter. To enable higher power density and overcome possible issues during such a process, cooling is essential. For low-power applications, forced air cooling can be used. For high-power applications, liquid cooling is preferred due to its heat dissipation capability, and it can be used in traction inverters. The cooling performance of the switches can be enhanced by integrating as many features as possible in the power modules.