Broadcom is front and center in the news these days with its recently announced acquisition of VMWare for $61B in cash and stock. This is one of the largest tech acquisitions ever, similar in size to Dell’s $60B acquisition of EMC in 2016 and Microsoft’s pending acquisition of Activision Blizzard for a purported $69B.

While Broadcom is making strategic moves toward software, it is more traditionally known for the chips it manufactures for data centers, networking, broadband and wireless applications used in connected devices around the world.

But Broadcom’s chip portfolio also finds application in industrial and energy use cases such as wind and solar power generation and motor drive and control solutions.

As the global economy seeks alternatives to fossil fuels to power its progress, the adoption of renewable solar and wind energy production sources has grown.  According to the International Energy Agency’s (IEA) Renewables Market Report, “annual additions to global renewable electricity capacity are expected to average around 305 GW per year between 2021 and 2026 in the IEA main case forecast.”

In a typical wind turbine system, Broadcom provides many of the optocoupler and fiber optic components critical to control signaling between the control, power generation and battery bank portions of the system. Within the power generation path “noisy” AC power from the turbine is rectified to DC power and then inverted to clean and useful AC grid power.

Gate Drive Optocouplers can help to translate the control level signals from the Turbine Control Unit (TCU) to the drive signals that control the sequencing of the high voltage and current control switches of the Rectifier and Inverter circuitry.  Optocoupler Isolation Amplifiers, High Galvanic Isolation Links and Digital Optocouplers are additional board-level component options to help manage control and feedback signals between the control level and high voltage planes of the turbine system. 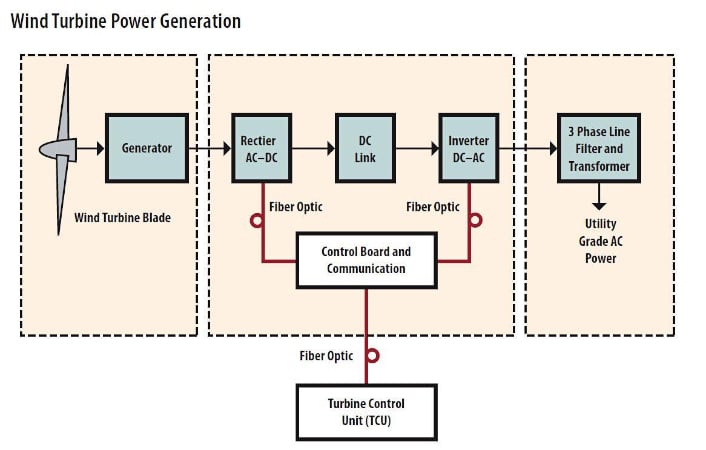 In a solar power system, the optical isolation component applications are very similar.  Solar generation systems also use battery banks for continuity of power during periods when solar energy production cannot keep up with demands.  Unlike a wind turbine, the energy output of a solar panel is DC, so a rectifier from AC to DC is not required, but the need for an inverter remains to convert the DC power to useable, utility-grade AC power. 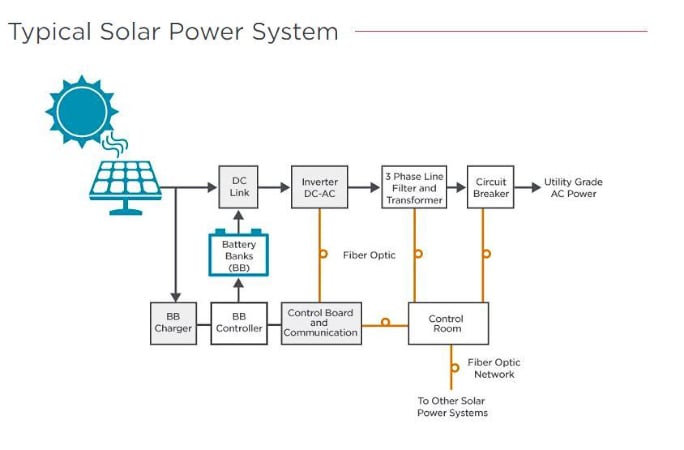 Basics of the Optical Isolator

As discussed in the wind and solar generation applications, the main purpose of the optical isolator is to provide a control and feedback signal path across the high voltage isolation boundary with utility-grade power. The basics of an optocoupler are an integrated LED Emitter and Diode Detector that serve to pass signals across an internal isolation barrier with the desired creepage and clearance characteristics sufficient to meet system functional and basic (safety) insulation requirements.

The input signal modulates the LED Emitter output, which is then received by the Diode Detector on the other side of the barrier.  The corresponding electrical output from the detector, which remains representative of the input, can be conditioned as needed (gain, drive, digital, etc.) for use in the end application, such as an IGBT gate drive in an inverter application.  Other applications for optical isolators include digital signals for logic and computer peripheral applications.  Typical signal propagation delays from input to output can be a couple of hundred nanoseconds (ns) or less.

Optocouplers often need to perform in “noisy” environments in the vicinity of motors, generators and other industrial equipment. Think back to the wind turbine application and all the potential system noise sources that need to be considered. Any isolator will have some form of capacitive coupling from input to output that can act as a propagation path for transient noise signals.

In the case of a digital isolator, like the ACPL-M21L, Common Mode Rejection (CMR) performance is critical to ensure transient noise does not lead to false triggering of the isolated logic signals.  The good news with optocouplers is the relatively low signal attenuation of light across the isolation barrier allows for maintaining high isolation distances, improving CMR performance. The ACPL-M21L, specifies a minimum Common Mode Transient Immunity of 25 kV/us for both high and low logic states. This represents the maximum tolerable rate of change of the common mode voltage to assure the output will remain in the correct logic state.  The ACNT-H343 has a minimum Common Mode Transient Immunity of 100 kV/us for its gate drive applications. 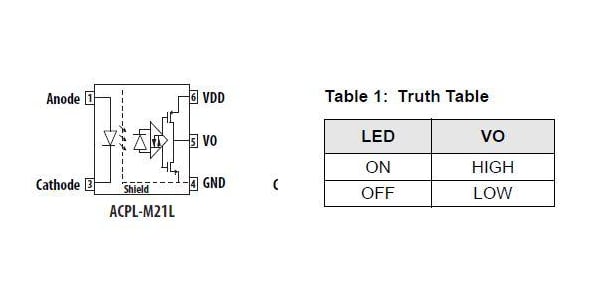 Although the terms isolation and insulation are frequently used together or interchangeably there are distinct differences. Isolation refers to the ability to reject high voltage noise while insulation has to do with the maximum voltages a barrier can withstand before it breaks down.

Going a little further, the three main levels of insulation are functional, basic and reinforced.  Functional insulation ensures proper system operation while basic ensures user safety from electrical shock.  Reinforced refers to two levels of insulation that ensure continued operation even if one layer breaks down.  For reference, the IEC/EN/DIN EN 60747-5-5 insulation voltage of the ACNT-H343 is over 2000VPEAK.

Illustrations of Isolation and Insulation in an Isolator, Courtesy Broadcom