The omnipresent trend in Power Electronics for higher performances at smaller space require a quick, effective and cost-efficient heat-transfer within and out of highly compact Power Modules. A well-designed Heat-Management Concept from the beginning of a new design guarantees longer lifetime of the electronic components and by that higher quality of the whole Electronic Power Module

In numerous electronic applications, especially in the field of power electronics, it is no longer sufficient to just transfer the heat generated by the electronic components to the ambient air via the printed circuit board. Instead, additional cooling of the components is required, which is achieved using an external, active or passive cooled heat sink.

Figure 1. Schematic of a cooling chain in power electronics using the example of an IMS Power Board, coupled to an aluminum heat sink via TIM

TIM dielectric prevents or minimizes air inclusions in order to enable efficient heat transfer from the heat source to the heat sink. A technically, as well as commercially, efficient solution for the thermal and insulation challenges in power electronics, can be found in an electrically insulating heat-conducting dielectric layer, such as the “BONDSHEET Cured” dielectric film from Aismalibar.

Consisting of a glass fabric base, enriched with mineral fillers, this thermal interface achieves a thermal conductivity of 2.2 W/mK with dielectric strengths greater than 4 KV (70 µm dielectric) or 6 KV (100 µm dielectric thickness). Utilizing a thin film thickness (70 or 100 µm), a low thermal resistance Rth of 0.315 or 0.45 Kcm2/W is achieved, which efficiently dissipates the heat generated by the power components to the following cooling element for spreading and dissipation to the ambient air.

The main usage area for the Aismalibar thermally conductive/electrical isolating silicon-free TIM foil today are in power electronics, where best compromise of heat transfer combined with electrical isolation is essential.

Here as well, key task of the film is to efficiently dissipate heat with maximum insulation dielectric strength in order to optimally connect power MOSFETs to the liquid-cooled micro-coolers from IQ-evolution. Extensive tests proved, that for this particular application the heat-conducting dielectric film achieves the best technical-commercial combination of heat dissipation and dielectric strength compared to alternative TIM techniques. 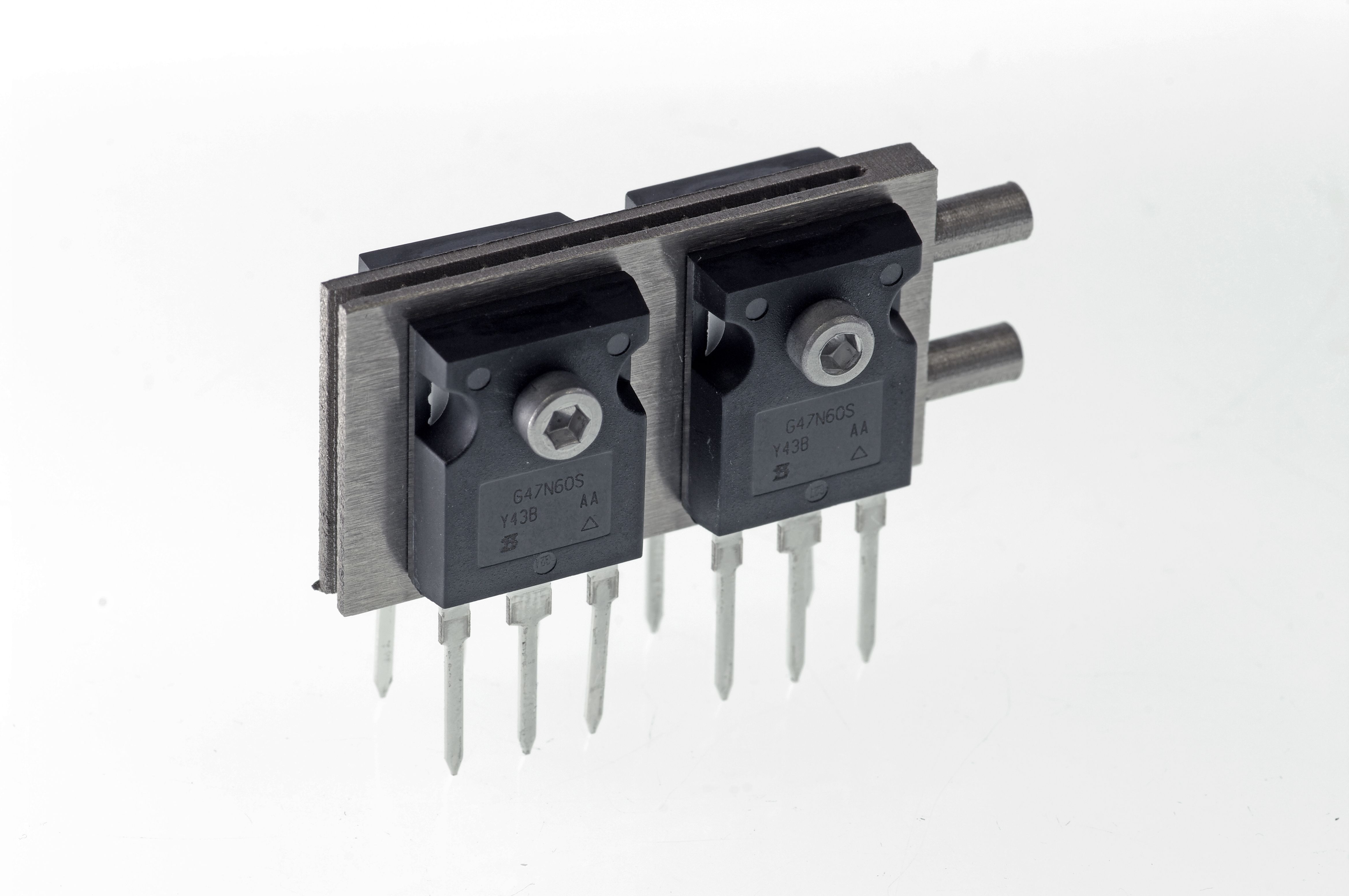 Foil Manufacturing / Contouring Starting point of the foil manufacturing at Aismalibar in Barcelona is glass fiber cloth type 106 and 1078/1080, which gets enriched with mineral fillers in an Aismalibar proprietary process to achieve thermal conductivity of the film. Apart from the pure filler material properties, particle size and distribution throughout the foil is key factor to achieve a homogeneous thermal conductivity of the TIM film. First manufacturing output in Aismalibar is a PREPREG film in B-stage, which is used by PCB-Shops worldwide for pressing Multilayers in their PCB Production.

In a following process steps at Aismalibar, the B-stage PREPREG gets cured, where it achieves it’s specified key values concerning thermal conductivity and dielectric strength.

Bondsheet Cured leaves the Aismalibar manufacturing line in sheets of 1245x945mm und 1245x1040mm, which Aismalibar ships to those customers, who prefer cutting the sheets into sizes by themselves for usage in their power module assembly. Equally, customers consume panel formats, which are common in the PCB industry, like 18x24” (460x610mm). 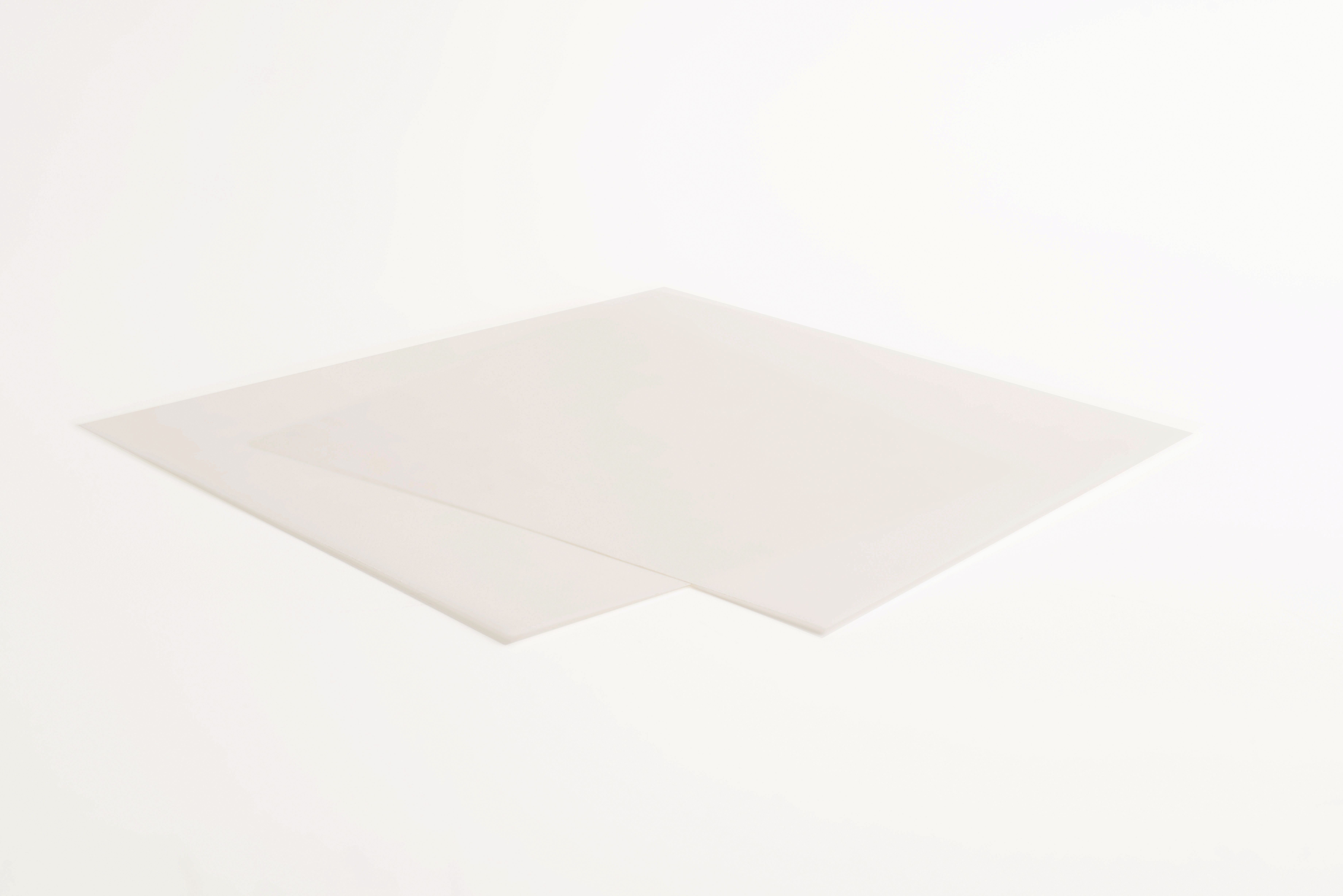 At the customer's request, BONDSHEET CURED film can be machined in-house Aismalibar to any rectangular or square format to be delivered in stacks of several hundred individual films for manual or automated further processing at the customer's facility.

For early test samples, prototypes, and small quantity pre-series, Aismalibar offers contouring of foils according to customer specifications. This allows a direct foil placement to the PCB in the customer’s power module assembly. As the usage of the foil does not require any oil, grease, paste or silicone, an easy mounting, as well as disassembly (in case of service/upgrade) of the electronic power module is feasible.

A new way for contouring the Aismalibar BONDSHEET Cured foil to customer-specific PCB outline requirements is contouring by "Water Beam". This new way of shaping the foil allows precise and flexible contouring of e.g. holes, radius, edges, just any kind of shapes than what is achievable today by drilling, milling and sawing. "Contouring by Water Beam" is a solution for quick foil sample supply down to quantity "one" For high volume serial production, punching the foil with a customized punching tool has proved to be the most effective serial production solution. 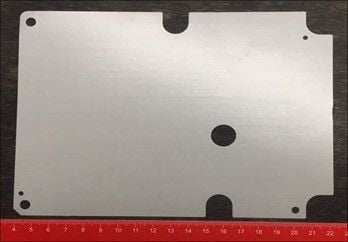 Outlook TIM / Cooling-Concept developments at Aismalibar Aismalibar is researching future TIM foil technologies, where a combination of a Cured foil core plus B-Stage layers on top will allow the lamination of such multiple foil layer solutions at customers power module manufacturing for optimizing thermal conductivity and dielectric strength of the cooling chain. In addition to above, Aismalibar develops thermally conductive dielectrics, that meet and increase the high technical requirements for thermal conductivity and dielectric strength. In addition, optimizing the processability is a key development target, especially for high-volume serial productions such as in the automotive sector. One example is the “Dual Thermal Coating” (DTC) process, by which two glassless dielectric layers are applied directly to a metal carrier (copper or aluminum). With this new type of dielectric technology, the heat-conducting / insulation dielectric layer is a direct part of a metal carrier in very thin thicknesses.

The lower layer of the dielectric is hardened during the manufacturing process at Aismalibar to obtain the desired electrical and thermal properties as specified in the datasheet. 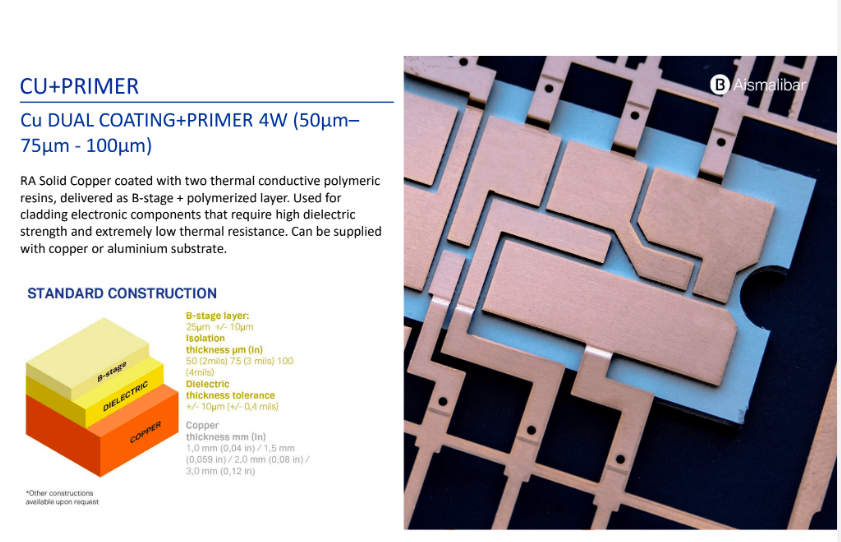 An additional layer of B-stage is applied to the cured dielectric layer, which allows for further processing by the user. In its assembly, this structure (metal carrier plus two-layer dielectric) is laminated under pressure and heat to form a homogeneous overall unit. The result is a highly compact power module with optimized electrical and thermal properties, not requiring any mechanical components for pressing the different layer of the cooling chain together. DTC offers an extended application lifetime throughout rough operational conditions plus long storage life, meeting the strict requirements of the electronic industry. AISMALIBAR is a longtime European Manufacturer and Innovator of substrates for the worldwide PCB Industry (FR4, CEM, IMS), since 2011 part of the Benmayor Group.

The production backbone is the development and manufacturing of IMS (Insulated Metal Substrate) technologies for thermally critical electronic applications. Manufactured in own factories in Barcelona, Spain and China, AISMALIBAR is shipping IMS materials to PCB-Shops worldwide.

In addition to the above PCB materials, AISMALIBAR is developing and producing thermally conductive foils to be used as thermal interface TIM between the heat-generating heat source and an external heat sink. Foil’s Key Performance Indicators are high thermal conductivity (respectively low thermal resistance) in combination with the highest isolation strength, as in many newly upcoming applications user protection against high voltage shock becomes mandatory. Customer’s manufacturing like Bondsheet Cured film due it’s silicon-free status.