The Importance of the Ignition System in Reaching Greener Mobility

The Importance of the Ignition System in Reaching Greener Mobility

This article discusses the advantages of Littelfuse's Ignition IGBTs and how Electric Vehicles may have a significant impact on environment and economy.

Although the number of newly-registered electric cars hit a record in 2016 with around 750,000 units worldwide, electric vehicles (EVs) still represent roughly only 1% of new light vehicles sales [1], far below the forecasts done in the past [2]-[6]. Over the next five years, we expect to see an increase in the share of EVs but by 2022, approximately 88% of the cars would still be powered exclusively by an internal combustion engine, and another 10% would be hybrid, containing both electric and combustion drive train [7]. 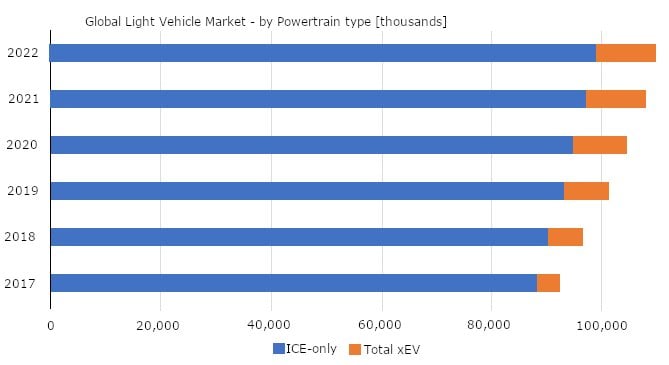 Due to environmental concerns, there’s a need to pursue a more sustainable mobility model. Electromobility news fill the mass media. Examples include entire automobile companies converting completely to EV production, and countries vowing to eventually ban the sales of automobiles with internal combustion engines [8]. So, the interest in electromobility is obvious. Then, if this is the case, what makes the vast majority of current customers purchase a vehicle that is powered solely by an internal combustion engine (ICE) instead?

First, the economic impact of higher acquisition and ownership costs (including maintenance and replacements) for EVs’ powertrain for comparable power and size [10]. Without incentive policies enacted by local and national administrations, the electric car would hardly penetrate the market in a considerable way. Second, drastic improvements are needed in the capability of, and accessibility to, the energy infrastructure. Also, the increased load on the grid and need to retain stability while reliably supplying energy to unpredictable, highly variable loads have to be considered.

ICE vehicles make up the vast majority of the new cars sold, and the market trend does not indicate a significant change in the future. Subsequently, in order to reduce the environmental impact of cars we must focus on making the gas-fueled vehicles “greener”.

Emission regulations and impact on the ignition systems

In this effort, governments and international institutions are requiring car manufacturers to reduce vehicle emissions through the adoption of more restrictive legislations: European Euro 6, Japanese PNLT, America’s Tier 1-3, for example. Other industrialized countries are catching up: China with China 6 and Beijing 6 and India with Bharat 5 and 6 are following rules equivalent to Euro 5 and beyond [11]. All of these activities aim to dramatically reduce the number and amount of pollutants released to the environment, and at the same time, provide an improvement in vehicular mileage. There are various mechanisms at the vehicle and subsystem levels to achieve this goal. While improvements in aerodynamics, reductions in mechanical friction and adding advanced drive assistance will help move the market to this goal, clearly the drive train plays a crucial role.

In the engine, focusing on combustion can lead to improvement through advanced pollution control and combustion monitoring [9], to ensure that combustion has been done properly. More advanced and precise spark generation helps to improve the power that the engine delivers as well as reducing the emissions. By varying the spark timing, more power is generated at higher RPMs and tailpipe emissions at cold-start are reduced, for example. Of course, improving the vehicle fuel economy and reducing the CO2 emissions further can diminish the power output. However, incorporating new mechanisms like friction reduction, turbocharging, etc. can offset the power losses. Also, higher compression ratios (ratio between the maximum volume introduced into the engine and the minimum volume compressed inside the chamber) seem to benefit the energy efficiency: from 8:1 to 10:1 or even more, like in compression combustion engines [12].

Now the question is, how do these new regulations affect the ignition system and consequently, the ignition IGBT?

Combustion in ignition systems is triggered by the spark across the gap in the spark plug. Spark characteristics are determined by parameters such as the spark gap width, the secondary side pulsed voltage level, the spark duration and the spark energy [13]; parameters that depend on the operating conditions and characteristics of the combustion engine. For instance, leaner fuels require the use of wider gaps to allow more air-gas molecules between the spark gap to ensure proper heat transfer when the combustion process is initiated. The use of wider gaps requires higher voltage ratings in order to initiate the arc in the spark gap and consequently, higher voltage ratings are required for the Ignition IGBT and the elements used in the ignition system. This is also the case when higher compression ratios are required, where it is found that the increase in pressure needs higher voltage levels to ensure the arc-over in the spark gap. Furthermore, smaller engines (with smaller cylinders, while maintaining the same power) and increased acceleration capabilities (for high-performance vehicles), require that a higher number of combustions, and consequently, higher Ignition IGBT switching cycles take place within a given timeframe. In both cases, that results in higher operating temperatures [Figure 2]. 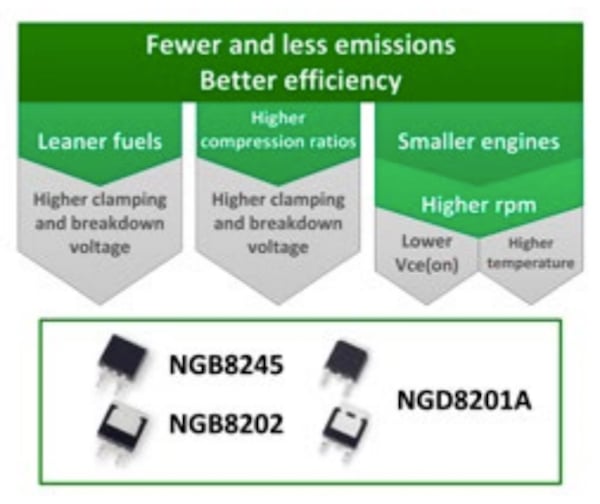 Figure 2: New requirements for the Ignition IGBTs based on new emission regulations and some Littelfuse featured devices.

Littelfuse Ignition IGBTs have very low Collector to Emitter ON state voltage, Vce(ON), compared to other devices with similar current and power ratings, which makes them ideal for use in newer ignition systems with higher RPM ratings, where the rising temperature is a concern. Lower Vce(ON) values result in lower power losses and consequently, lower junction temperatures, smaller system footprint, and less losses. As an example, the test bench setup shown in Figure 3 was used to study the thermal behavior of different Ignition IGBTs under different switching frequencies. 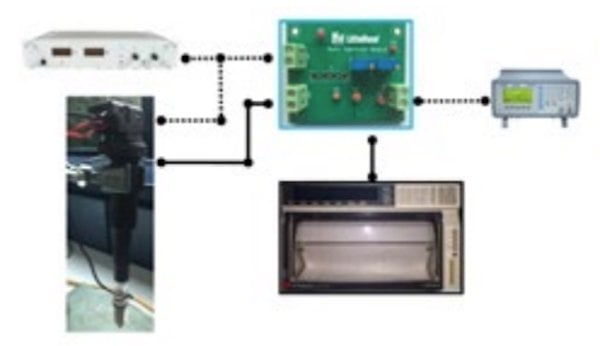 Figure 3: Ignition system experimental setup. The DC supply is set to 12 volts, the square wave generator is set to 5 volts and the frequency is adjusted depending on the test performed. The temperatures of the Ignition IGBTs are taken at room temperature and using a Yokogawa hybrid recorder. The Ignition IGBTs and associated circuitry are mounted in Littelfuse Ignition Evaluation Board. Bosch spark plug and ignition coil 0221504470 were used.

The Ignition IGBTs used in the comparison are Littelfuse NGD18N45 (Vce(ON)typ<1.5V), NGD8201A (Vce(ON)typ<1.35V) and one very popular device from competition (Vce(ON)typ<1.85V), all of them in the same DPAK package. The selected semiconductors are comparable, as they possess similar electric and physical die characteristics and equivalent current and energy ratings. As shown in Fig. 4a, an increase in the switching frequency of the Ignition IGBT, from 33 Hz up to 200 Hz, results in higher losses and consequently, higher temperatures. It is foreseeable that this rise in temperature will affect the performance of the Ignition IGBT and the expected lifetime of the device. Regardless of the switching frequency, Littelfuse devices ensure lower operating temperatures than the competitor device, as shown in [Figure 4b, 4c and 4d]. Notice that the benefit of a lower Vce(ON) gains importance as the switching frequency rises. Results show that Littelfuse devices work at approximately 10°C and 20°C degrees less than the competitor device at 200 Hz [Figure 4d]. Furthermore, the obtained temperature of the NGD8201A at 200 Hz is approximately the same as the obtained by the competitor device at 150 Hz [Figure 4a]. Consequently, Littelfuse devices enable the development of ignition systems capable of achieving higher RPMs. A significant advantage that allows our customers to meet the ever-increasing regulations of the automotive industry, while maintaining a small footprint since they do not require the use of bulky heat sinks or thermal management systems. 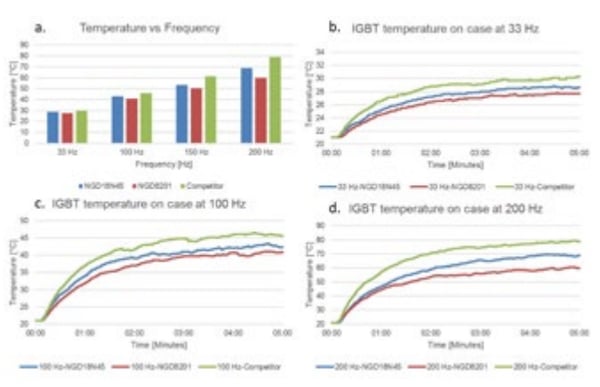 Stricter legislations will challenge the ignition system designers to continue improving the combustion efficiency as a bridge technology until much broader success of e-Mobility occurs; in some cases, even leading to new combustion concepts - like Mazda’s SKYACTIV-X, released to the market recently. Other potential developments include new igniters which require newer semiconductor technologies, for example corona and plasma igniters. In the meantime, increasingly more stringent requirements and harsher operating conditions are applied to the Ignition IGBTs, and Littelfuse devices can cover these current and near-future architectures, bringing sound experience in circuit protection to its rich Ignition IGBT portfolio. Surely, challenging and exciting times are to come for the car makers towards a greener mobility

Jose Padilla, M.Sc. in Electronics from the University of Sevilla, joined Littelfuse in October 2016 as Product Marketing Manager for Ignition devices. Before joining Littelfuse he was Product Marketing Manager at Fairchild, and application and system engineer at Infineon Technologies. From 2007 to 2011 he worked at AICIA, a research institute in Andalusia, Spain, dealing with power electronic converters for grid efficiency improvement.

Stefan Edenharter joined Littelfuse in November 2016 in his current role as Senior Manager Marketing for Automotive Electronics. He received his M.Eng. in Industrial Engineering from the University of Applied Sciences Amberg-Weiden, Germany. Prior to joining Littelfuse, he worked 8 years for Infineon Technologies in engineering, product management and marketing for combustion and electric-engined drives within the automotive division.