This article discusses the passive components and effects that are important things to consider to have further gains in SMPS efficiency.

Efficiency has - at last - achieved prime importance in power supply design. For offline SMPS < 1 KW which constitute the majority, available active components, including SiC and GaN, in optimum circuit configurations like cascodes, are so advanced that the focus is now squarely on improving the passive components.

The function of shields against hf fields is also based on the skin effect. Ideally, a shield is a box, the incident hf fields cause eddy currents, their fields act against the external fields and weaken them by extracting energy and convert this to heat. The power loss in the shield is given by:

The shielding effect is the better the smaller the depth of penetration δ and the higher the conductivity κ = 1/ρ are. Copper is the best material, contact areas must be all around. Higher permeability improves the shielding, but it causes higher losses to the impinging field. Consequently, the best shield is a two-layer construction: on the outside, towards the field, copper, on the inside high permeability material like iron or mumetal. The thickness of the copper does not have to exceed 3 to 5 δ. In lf fields only the high permeability material will be effective, but not any more by virtue of the skin effect; the magnetic field lines will be attracted by the high magnetic conductivity of the iron and conducted past the object to be shielded. Note: mumetal’s saturation is low, it can only be used in weak fields. Ferromagnetic mulitlayer shields will increase the shielding by μn.

Shields between the primary and secondary of transformers should be made of high resistivity material <= δ/3 and have minimal insulated overlap, because this is a capacitor through which hf currents complete a shorted turn. Losses are proportional to the conductivity and to the third power of the thickness.

A single conductor and the pure skin effect are rare in electronics. As soon as other fields are present, the much more important proximity effect has to be reckoned with wherever two or more magnetic hf fields exist, like in SMPS. Circuit layout, especially the conductor layout on e.c. boards and all design of inductive components require strict obedience to its rules

The proximity effect is best described by Fig. 12. Assume two conductors which carry the same hf current in opposing directions. As long as they are far apart, they do not influence each other, the current densities will conform to the skin effect. As soon as they come close, the fields add between them and subtract on their opposite sides. Because the field strength H is linked to the current by H = I x N/l, the currents will concentrate on the sides facing each other. 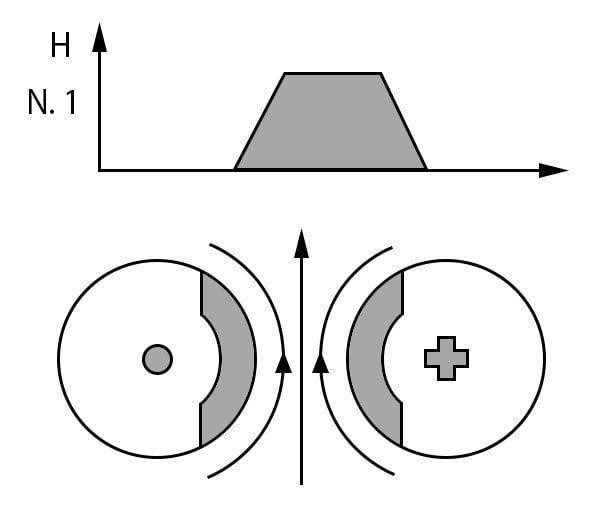 Figure 12: Two neighbouring conductors carrying opposing currents (as shown by the dot (point of an arrow) and the cross (denoting the rear of the arrow). The fields between them add while the fields on the opposite sides subtract. The field strength is highest between the conductors, so are the related current densities.

This follows again from the law of minimizing the energy content resp. minimizing the inductance. Note that most of the conductor material towards the outer sides does not contribute to the energy transport and could be dispensed with! This is analogous to the center area of a conductor when only the skin effect is present.

Considerations in e.c. board design

In order to highlight the enormous importance of the proximity effect, consider two conductors on an e.c. board as shown in Figs. 13 and 14. Fig. 13 depicts the situation if the two conductors are side by side. Providing wide conductors for high hf currents is futile; the currents concentrate at the gap, increasing the current density and causing high losses.

Figure 13: Current concentration in two flat conductors side by side on an e.c. board. Wide conductors are nothing but a waste of copper

Fig. 14 shows that running the currents through a pair of conductors on both sides of the board would result in uniform distribution and lowest eddy current losses, fairly low emi. For a copper thickness of <= 200 μm which is within δ the skin effect will be low. Conductors can be wide for high currents without a penalty. This is all right for low voltages; with high voltages like the 360 + Vp in a PFC dielectric losses in the board will accrue which could be higher. A typical example of such a conductor pair: from the transformer to the rectifier diode(s), through the filter capacitor and back to the transformer; from the filter capacitor onwards to the output there is only dc. 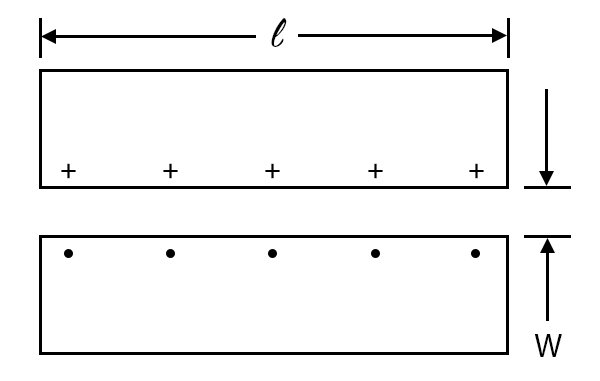 Figure 14: Current concentration in two flat conductors on both sides of an e.c. board. The distance w is here given by the board thickness, usually 1.5 mm, so the proximity effect is less pronounced.

Consequences for all conductors of hf currents: 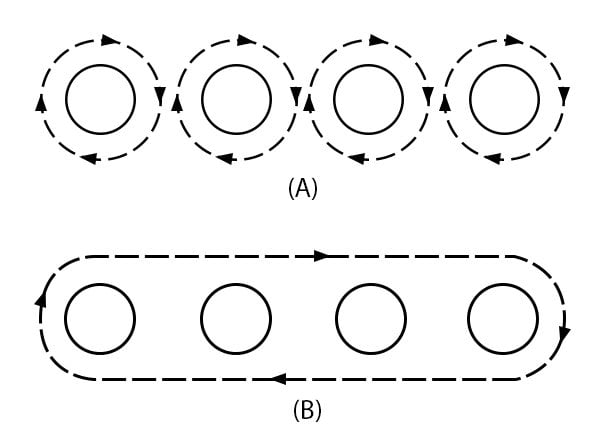 Figure 15: Parallel winding of several thinner wires is equivalent to one conductor of the same shape, e.g. an ideal copper foil. Between wires the flux lines will cancel. The wires must be < = 0.24 mm anyway. Hf litz wire preferred

Some considerations in choke and transformer design

Unless skin and the proximity effects are duly considered in all choke and transformer design, excessive unnecessary “inexplicable” losses are programmed! A description of all implications of these effects on SMPS transformer design and the right selection of ferrites requires many pages and is postponed to a later article. The professional design of these components belongs to the most demanding tasks in SMPS design - and not the design of the regulation loops which is a menial task. In this paper only some general rules and typical examples about hf transformer design are described; the purpose is to demonstrate and warn that hf transformer design is indeed very difficult and follows its own rules which differ substantially from 50 Hz design. Some examples: 1. The winding material of choice is hf litz wire, the second best is solid wire < = 0.24 mm. 2. All layers must be completely and evenly filled. 3. The number of layers must be minimized.

Secondary windings consist often only of a few turns. It would be absolutely false to just wind those in a layer and leave the rest free; the coupling would be poor, especially detrimental in flyback transformers. It would also be a waste of space. The right method is to wind several thinner wires in a multi-filar winding so to fill the layer entirely. If this turns out to be not feasible, the multi-filar turns should be evenly distributed over the whole layer.

Note that this is only meaningful if it occurs in the same layer! It is not possible to subdivide the copper area required for a winding in such a way that part of the paralleled wires is placed in one layer and the other part in another one. This would be disastrous because the law of minimizing the energy content would cause all the current to flow only in the one layer facing the primary, causing excessive losses, the layer ontop would not carry any current. Another example: If a designer needs a thick foil for a high current, much thicker than δ, and, realizing this, he might think he could fight the skin and proximity effects by subdividing the foil in e.g. 10 thin insulated ones, all <= 0.24 mm, wound in 10 layers, connected in parallel, he would be grossly disappointed, because the current would only flow in the first of the ten, facing the primary, no current in the other nine with the consequence of extremely high losses. See also 6.2.3. 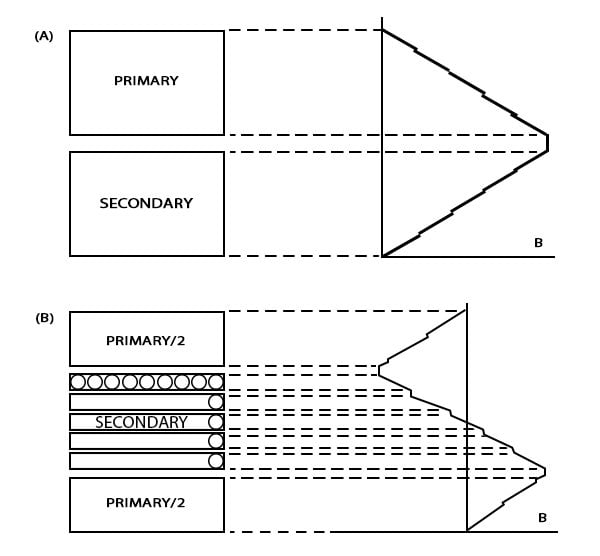 In an ideal transformer the primary and secondary fields cancel. In practice the main flux will flow in the core, but a part, the leakage flux, flows through the windings, it is not the same in all windings and not even in all turns of one winding. The resultant leakage inductance is measured by shorting the secondary and measuring the primary inductance, it is given as a percentage of the primary inductance when all secondaries are open. In a simple transformer, the density of the leakage flux is highest between primary (P) and secondary (S), to the sides it decays linearly. It can be decreased by splitting P, see Fig. 16, The number of turns as well as the number of layers of P must be even. The secondaries may be an uneven number. This is the standard execution of SMPS transformers. A further subdivision of windings yields no appreciable advantages. In the first place, at each P - S interface a 4 KVrms insulation would be required; this would cause a substantial loss of winding space, also cost and complexity would rise.

Assuming a path of the leakage flux in a distance x as measured from the coil former running through the window, assuming further a constant current density within the P winding the leakage flux density is given by:

bs : Length of leakage flux path external to the core, it isequal to the width of a layer.

The leakage flux is parallel to the layers and perpendicular to the turns; it generates eddy currents in the conductors. The leakage flux density changes from layer to layer. Low leakage inductance s is essential for all high quality transformers, it limits also the usable bandwidth: fupper /flower = 4/s. As an example: a high fidelity transformer requires a 16 times subdivison of windings.

Low leakage is especially required for the most important SMPS flyback transformers. Apart from the standard splitting of the P winding, it is often necessary to further subdivide the secondaries which can become fairly complicated. This e.g. the case for achieving a good cross regulation behaviour in flybacks. 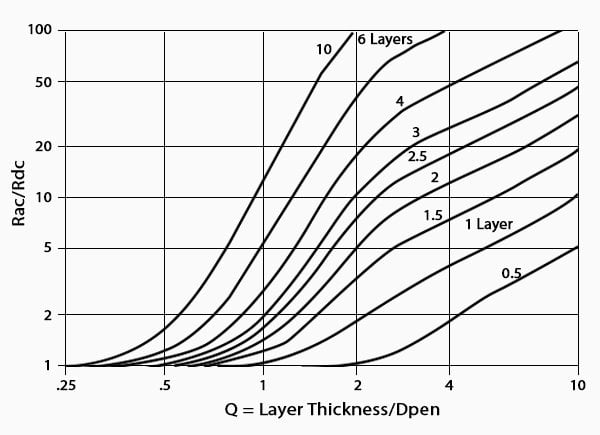 Figure 17: RAC /RDC as a function of the ratio layer (or wire)thickness/δ, the number of layers is the parameter. Even if the diameter of a wire is equal to δ ( = 1), for two layers the AC resistance is already 100 % higher, for 10 layers 12 times as much! At first sight, a wire diameter of 2 δ should be acceptable: the diagram shows that the AC resistance would already be 80 % higher. Hence 0.24 mm is the largest diameter for SMPS, period. 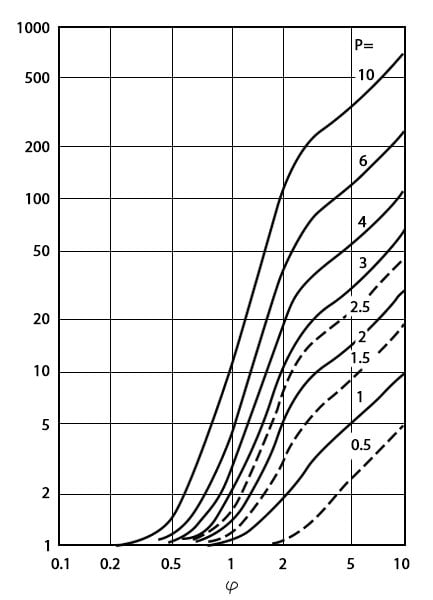 Figure 18: The same picture, the vertical scale extended by one decade. Beyond d/δ the curves approximate the linear relationship FR = nLayers x d/δ.

For sine wave currents FR is given by:

For the n-th layer:

heff : height of a layer/wire

Dr.-Ing. Artur Seibt is a professional electronics design lab consultant with specialization in SMPS with 40 yrs. experience incl. SiC, GaN, D amplifiers. Inventor of current-mode control (US Patent) and He is also an expert in EMI design.