This article introduces Lems's Rogowski coil with smart meter for accurate and easy-to-install smart current sensors for internet of energy.

Smart Grid for the City

The intelligent electricity network (smart grid) is the backbone of every smart city, since it:

A leading metering provider has introduced the use of flexible LEM Rogowski coil sensors (ART) with a smart meter connected to the low-voltage (LV) side of a distribution transformer in an MV/LV substation. The software in the smart meter calculates the thermal and electrical models of the transformer based on the LV measurements information, providing its oil temperature and ageing rate as well as MV current values and energy flows. It is an innovative, more economical way to manage the distribution grid without having additional sensors on the MV side. The smart meter’s overall accuracy with the LEM ART is better than 1%, superior to conventional Class 0,5 meters associated with Class 0,5 current transformers (CTs).

Within the MV/LV substation, the incoming power flow from the MV side (1) is managed by the MV switchgear (2) before being converted by the transformer (3) into LV (6). The smart meter (5) installed in the LV panel (4) measures the transformer’s (3) health with three independent current sensors – LEM ART (A). The ART allows safe commissioning of the smart meter on an existing live transformer.
Benefits for distribution system operators include:

LEM has developed the ART current Rogowski sensor with the capability to measure up to 10,000A and beyond. The ART is a raw coil achieving IEC 61869 Class 1 accuracy without the need for additional components such as resistors or potentiometers, which have a risk of drift over time. In addition, the ART labelled “Perfect Loop” has a unique patented coil clasp curing the inaccuracy caused by the sensitivity to the position of the conductor inside the loop. Finally, the ART provides the same ease of installation as split-core current transformers and the same Class 1 accuracy. The ART also has the best performance among other Rogowski coil players. 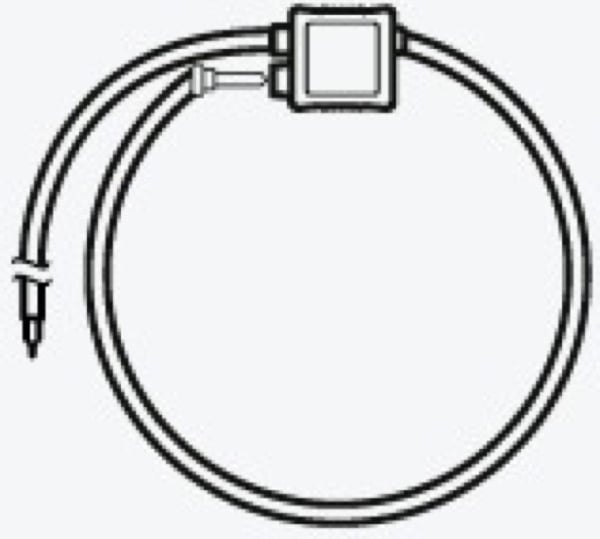 What is a Rogowski coil?

A Rogowski Coil is used to make an open-ended and flexible sensor that easily wraps around the conductor to be measured. It consists of a helical coil of wire with the lead from one end returning through the centre of the coil to the other end, so that both terminals are at the same end of the coil. The coil length is selected according to the relevant primary cable diameter to provide optimal transfer characteristics.

This technology provides a very precise detection of the rate of change (derivative) of the primary current that induces a proportionate voltage at the terminals of the coil. This is then a current measuring technology only for AC currents. An electronic integrator circuit is usually added to convert that voltage signal into an output signal that is proportional to the primary current. In other words, the Rogowski Coil enables the manufacturing of very accurate and linear current sensors, at the price of additional electronics and calibration.

A  Rogowski coil has a lower inductance than current transformers, and consequently a better frequency response because it uses a non-magnetic core material. It is also highly linear, even with high primary currents, because it has no iron core that may saturate. This kind of sensor is thus particularly well adapted to power measurement systems that can be subjected to high or fast-changing currents. For measuring high currents, it has the additional advantages of small size and easy installation, while traditional current transformers are big and heavy. 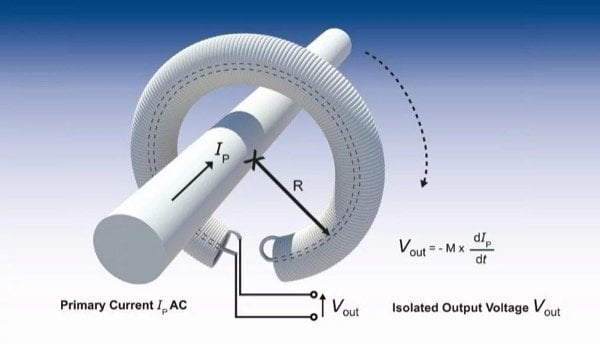 The performance of such current sensors highly depends on the manufacturing quality of the Rogowski coil, since equally spaced windings are required to provide high immunity to electromagnetic interference; the density of the turns must be uniform otherwise the coefficient M could change versus the position of the primary into the aperture.

Another critical characteristic is the closing point that induces a discontinuity in the coil, creating some sensitivity to external conductors as well as to the position of the measured conductor within the loop. The locking or clamping system should ensure a very precise and reproducible position of the coil extremities, as well as a high symmetry while having one of the extremities connected to the output cable. Some new technologies have recently appeared in this area, with special mechanical and electrical characteristics that allows much better accuracy and immunity to the primary cable positioning. While the error due to primary cable position was typically not better than +/-3% in the 50/60Hz frequency domain, it has been reduced to less than +/- 1% on some of the latest Rogowski coil sensors. 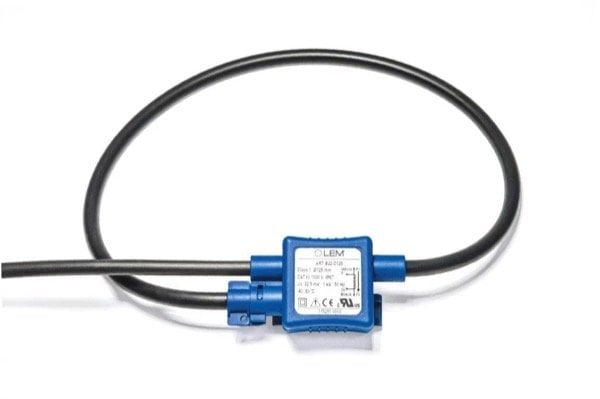 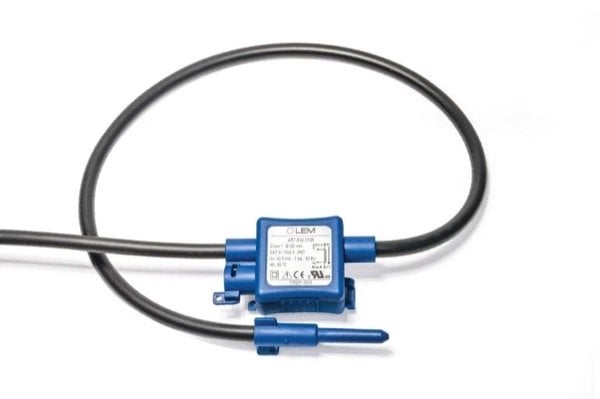 How LEM managed the challenge

Two main technics are on the market to make Rogowski coils accurate:

While the first is really easy to produce at a low cost, this is nevertheless highly sensitive to external environments, less accurate, and less reliable as it brings in more components.

At the opposite end, the Pure Rogowski coil requires much more investment and knowledge on the manufacturing process.

The really thin LEM ART Rogowski coil is part of this second method and has a gain of 22.5 mV/kA; it includes an electrostatic shield to protect against external fields (LEM patent), optimising performance for small current measurements.

The locking system has also been a key point in achieving the class 1 accuracy. And here again LEM had to find an efficient design to make the closure the most efficient possible.

To mask the imperfections on the closing mechanism as well as the connections of the sensor’s secondary wires, LEM engineers created a sleeve acting as a magnetic short-circuit (or more precisely a reluctance short-circuit), virtually bringing together the two sections of the coil located on each side. 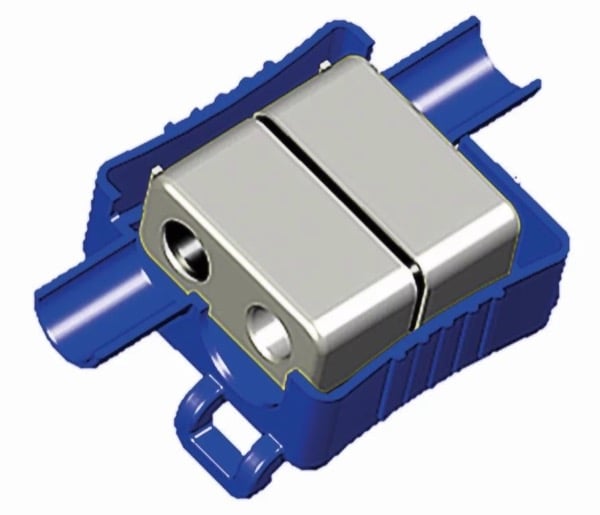 The sleeve is formed of a piece of ferrite as represented in Figure 5.

This approach was a complete success (LEM patent) – the error associated with the coil clasp has become almost negligible (Figure 6).

Here again, the ART loop is insensitive to this phenomenon and this has no impact on its accuracy thanks to the LEM know-how and patent. 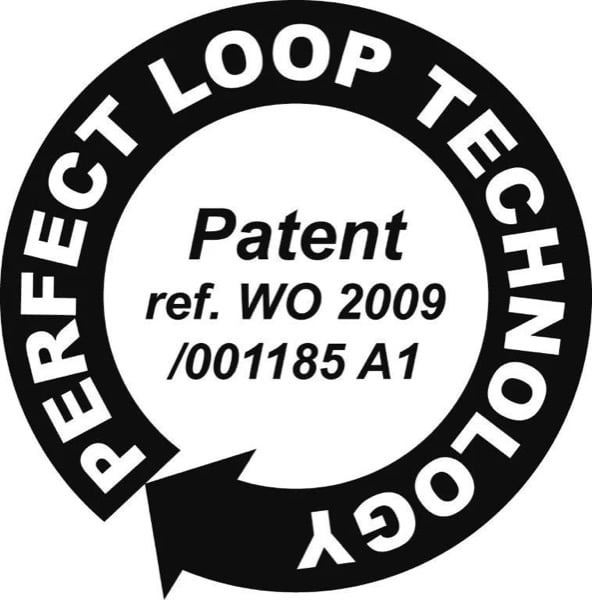 Figure 7: Orthogonality effect. Primary conductor position versus the axis of the Rogowski loop.

Finally, in addition to these high performances, the product had to be easy to use, to install and adapted to any conditions of use.

The ART series provides the same ease of installation as existing split-core transformers, but with the benefits of being thinner (6.1mm diameter) and more flexible.

Whatever the chosen dimension – 35 to 300mm diameter for the coil aperture – the ART can be mounted very quickly by simply clipping it on to the cable to be measured thanks to an innovative, robust and fast twist-and-click closure method. Contact with the cable is not necessary, and the ART ensures a high level of safety as well as providing a high rated insulation voltage (1000V Cat III PD2 - reinforced) and can be used in applications requiring a protection degree up to IP67.

Its fixing on the primary cable can be ensured using a cable tie through its expected slot.

The ART also allows the disconnection of the coil to be detected through the use of a security seal passed through a specially designed slot, making it really useful when used with a meter (Figure 8). 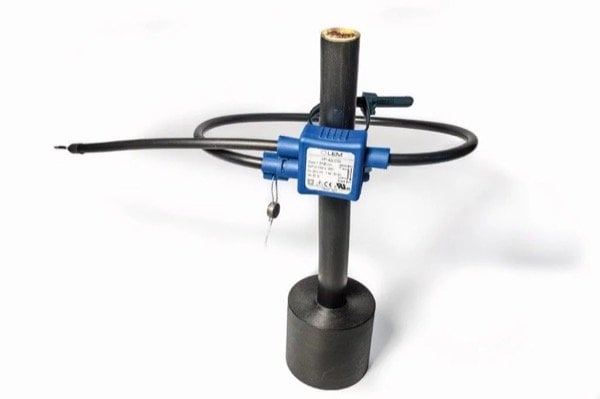 With the aim to bring more harmonization in the smart grid landscape, the International Electrotechnical Commission (IEC) builds foundations in every field to provide a strong, resistant, and secured electrical grid. Robust and accurate sensors in this network are major challenges to respond to this demanding environment.

IEC 61869 is the new performance standard for sensors, replacing the old IEC 60044 standard for current transformers. ART Rogowski coils sensors are designed and tested against a strict characterisation test plan established by LEM experts to comply with and contribute to this evolution. Due to its strong knowledge in accurate measurement, LEM guarantees the measurement repeatability of all of its transducers and accuracy of Class 1.0 according to IEC 61869-2 for ART models for use in future smart cities and their applications.

ART series current sensors are CE marked, UL 2808 recognised and conform to IEC 61869, as well as being covered by LEM’s five-year warranty.

Patrick Schuler has been working in the internet, telecommunications, smart grid, power electronics, and power utility sector for more than 15 years. Since joining LEM in September 2014, Patrick has been responsible for defining the global smart grid offering and managing smart grid business development. As a smart grid expert, Patrick is a member of the IEC’s world smart city community in Geneva and was the former smart grid chairman at the China European Chamber of Commerce in Beijing.