This article explains in detail the innovation potential and benefits of integrating SiC-technology in power electronics systems.

Today’s SiC power modules from Mitsubishi Electric (see Figure1) are belonging to the first phase of SiC-commercialization that had started around 2010. 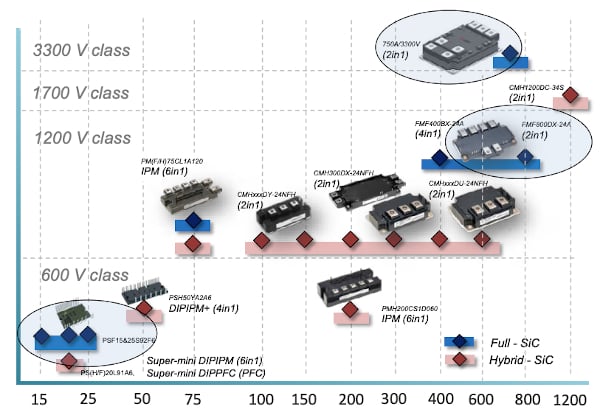 However, the SiC technology development started in Mitsubishi Electric much earlier, more than 20 years ago, see [1]. In the first decade 1994…2004, the R&D efforts were mainly oriented on the SiC chip technology itself, both for SiC MOSFETs and SiC Schottky diodes. After this, in the years 2005…2009, the focus was on the achievable system benefits by using SiC-modules in inverters.

For this purpose, several SiC-inverter demonstrators were designed and evaluated under different applications. The commercialization phase of SiC modules started in the years 2010…2014. Several types of full- and hybrid SiC-modules were launched in this period and the first industrially manufactured inverters with Mitsubishi SiC-Modules appeared, mainly in Japan. In parallel, the SiC-MOSFET chip technology was continuously undergoing further improvement steps; see the 1200V development roadmap in Figure 2 for example. 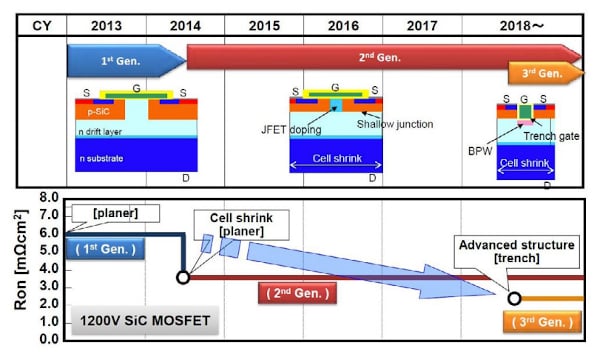 Particularly since 2015, SiC-modules started to enter many new application areas. This expansion process is still ongoing and even gaining speed. The today available SiC–power modules from Mitsubishi Electric are covering a wide current and voltage range, see Figure 1.

This article is explaining the innovation potential of SiC-technology in power electronic systems by referring mainly to three examples of SiC power modules selected out of the product range given in Figure 1:

High energy efficiency is a key requirement for inverterized air conditioning systems. The PSF15S92F6 was developed for home appliances, such as air conditioners, washing machines, refrigerators 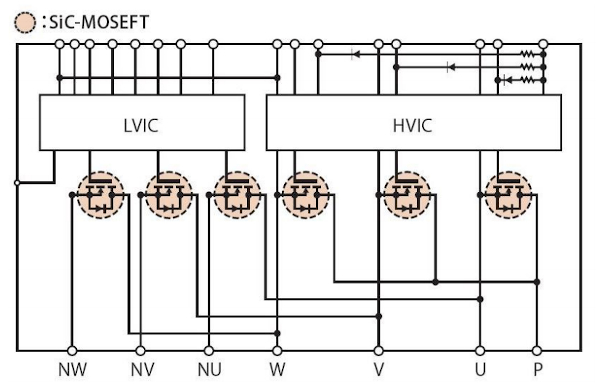 [2]. The circuit diagram is shown in Figure 4. It contains a 3-phase inverter with SiC-MOSFETs and their driving ICs. The package outline is shown in Figure 5. Compared with a conventional 15A Si-IGBTDIPIPM manufactured in the same module package the new full SiC DIPIPM is offering 70% lower power loss under the same application conditions (see Fig.6). By using the PSF15S92F6 an outstanding energy efficiency of the new “Kirigamine” room air conditioners was reached. 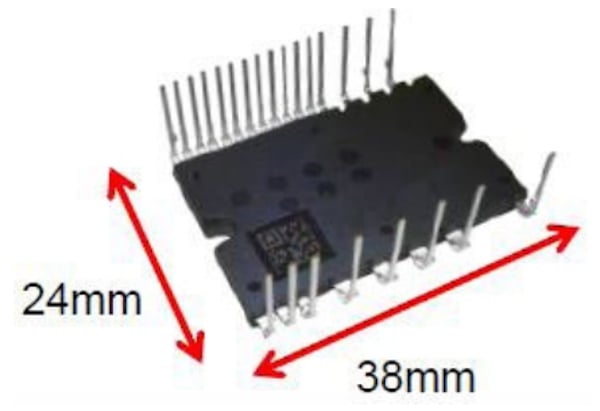 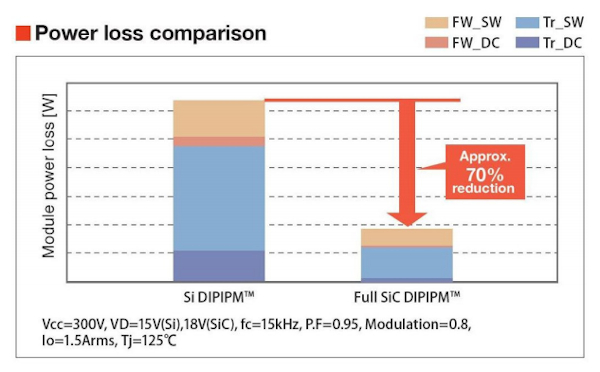 Another application benefit of the Full SiC-DIPIPM is shown in Figure 7: The smooth diode recovery at MOSFET turn-ON is remarkably reducing the radiated noise, thus relaxing the requirements towards the EMI-filters.

In April 2015 we reported in Bodo’s Power [3] about a new 800A/1200V Full SiC Dual module (type name FMF800DX-24A). For efficient driving and protecting this device, a dedicated gate driver was developed by Power Integrations GmbH [4]. Recently Mitsubishi has launched an advanced version of this 800A/1200V full SiC Module having the new type name FMF800DX2-24A. The low loss SiC-chip set is the same, but the package is modified compared to the previous version, see Figure 8. 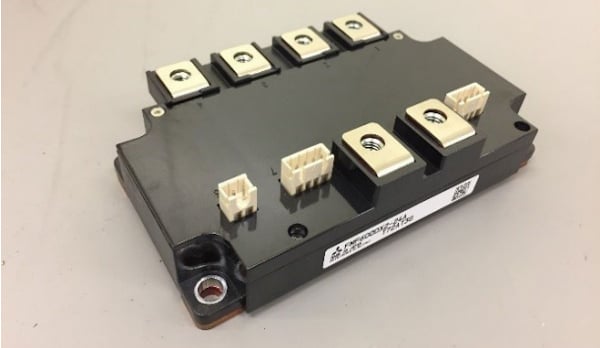 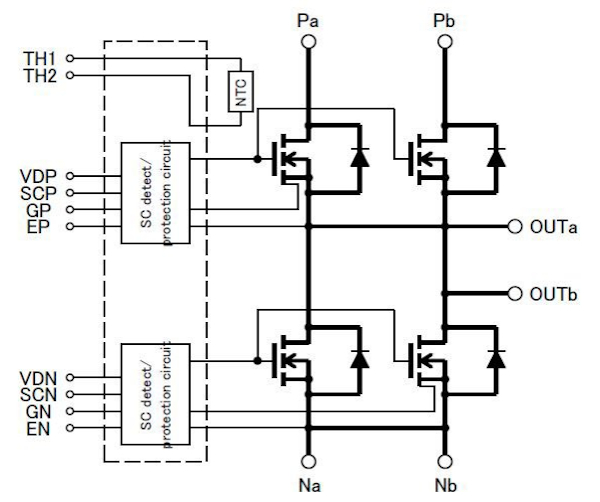 The internal package inductance is less than 10nH; the isolation voltage is Viso=4kV AC. Real Time Control (RTC) circuits are incorporated into the module both for P- and N-side SiC-MOSFETs, see Figure 9. This RTC is using the MOSFET-chip integrated current sensors for SC-detection and efficient SC-current limitation by fast gate-voltage shutdown; see Figures 10 and 11. 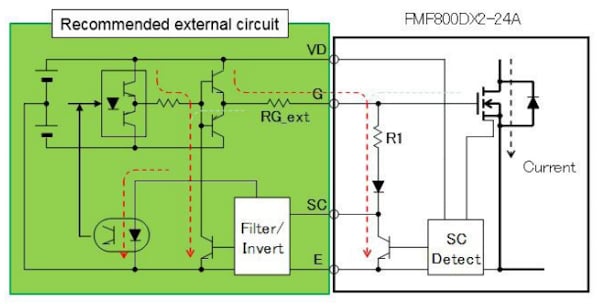 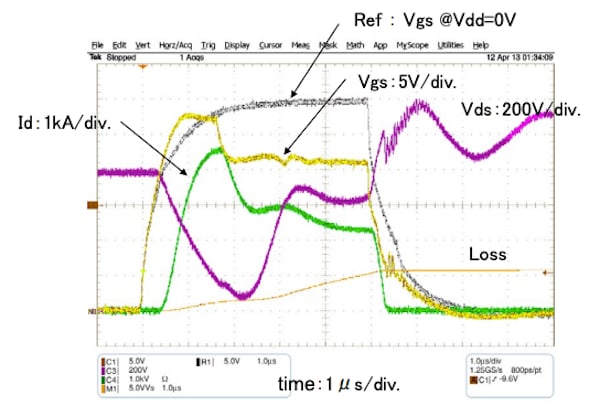 When comparing the power loss of the 800A/1200V full SiC-module FMF800DX(2)-24A to its Si-counterpart under the same application conditions, the advantage of SiC becomes evident [1], see the 110KWinverter example given in Figure 12. 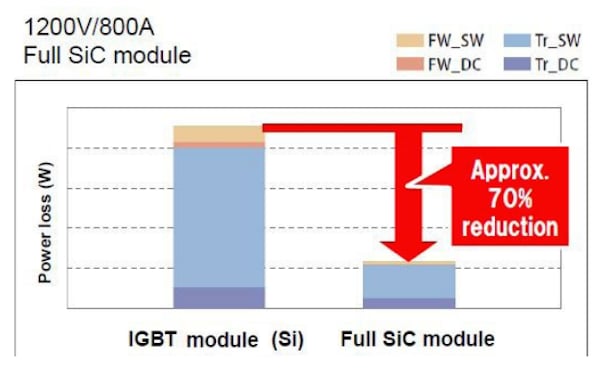 There are two possible ways for utilizing this advantage:

Of course, any superposition of both aspects a) and b) is possible for obtaining the best advantage in a given application from using the full SiC-module FMF800DX(2)-24A.

In [6] the newly developed 750A/3300V full SiC Dual module FMF750DC-66A was introduced. It contains SiC-MOSFETs with antiparallel SiC-Schottky-Barrier-Diodes. In order to get a low internal package inductance (<10nH) and a good current sharing between the paralleled chips a new dual package has been adopted, called LV100- package (see Figure 14). 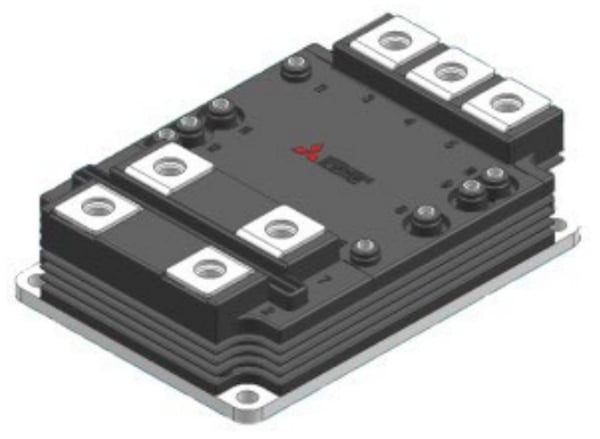 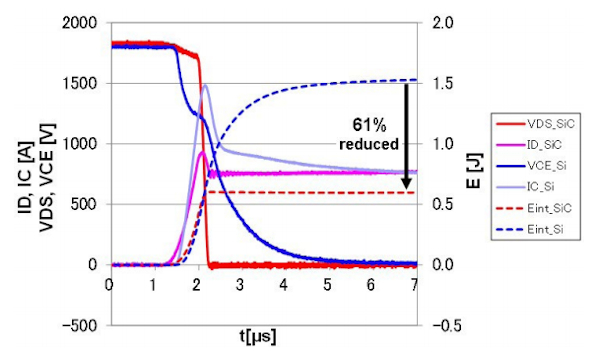 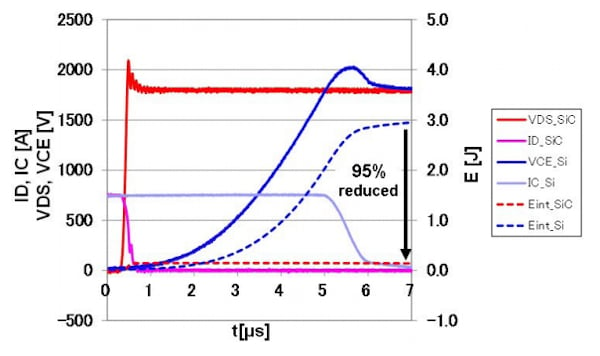 This dramatic switching loss reduction by SiC can be utilized in several directions, as described earlier in chapter 3: a) for reducing the inverter system size or b) for increasing the switching frequency or, as a combination of a) and b), depending on the priorities in the given application.

In order to meet the specific environmental and reliability requirements in traction applications the new FMF750DC-66A has passed several confirmation tests [6]:

As a result, it was confirmed that the performance of FMF750DC-66A is suitable for traction system use. This new all-SiC power module has about 80% lower switching loss than a conventional Si power module. By applying the FMF750DC-66A to the propulsion inverter in a railcar it was possible to reduce the total power loss by 30% compared with the existing system.

In parallel to the design-in-activities of already existing SiC power modules (see Figure 1), there are multiple R&D activities ongoing for adopting the SiC-technology to new applications.

Another example for Mitsubishi’s pioneering efforts to introduce SiC technology into automotive applications is shown in Fig.18. This ultracompact 430kVA-inverterized power control unit for HEV-application is incorporated into a housing of 275x151x121mm³. It represents the world’s highest inverter power density of 86kVA/dm³ [8]. 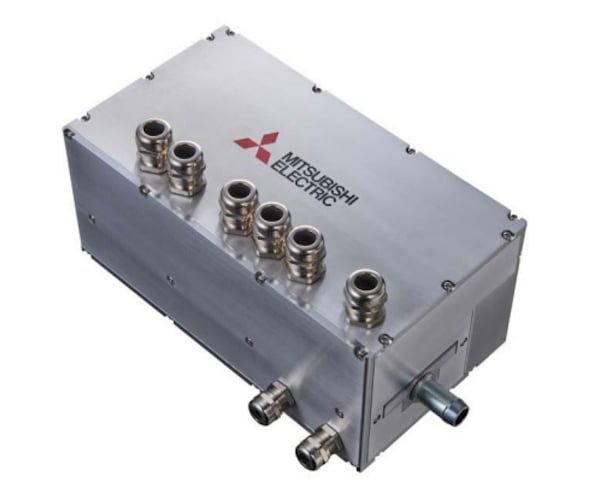 Another important R&D activity is focusing on the expansion of SiC technology towards higher blocking voltages. In [9] the successful fabrication of 8,1x8,1mm² 6500V SiC-MOSFET chips with embedded Schottky-barrier-diode (SBD) was reported, see Figure 19 & Figure 20. 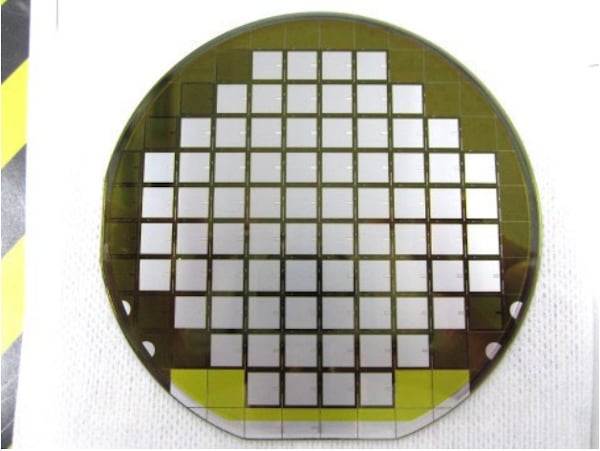 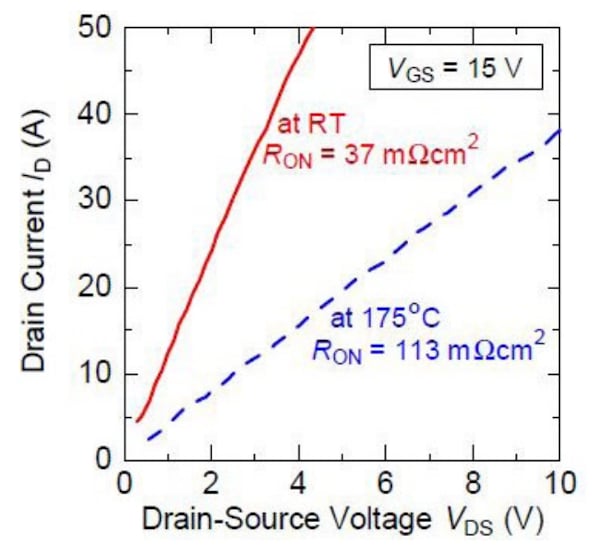 Mitsubishi Electric is a pioneer in exploring the SiC-technology for power modules. A wide range of SiC-power modules with currents between 15A and 1200A and voltage ratings between 600V and 3300V is already available. The main advantage of today’s SiC power modules vs. conventional Si-IGBT-modules are the drastically reduced switching losses. Depending on the specific requirements in a given inverter application this advantage can be used either for reducing the inverter size/improving the inverter efficiency or for increasing the switching frequency. The application area of SiC-based inverter systems is continuously expanding. By its wide R&D activities on SiC Mitsubishi Electric is continuously enlarging the fundaments for the coming SiC-power semiconductor age.

Junji Yamada (山田 順治) joined Mitsubishi Electric Corporation in 1985. After working for 5 years as an analog electronic circuit designer for engine ignition systems, he has been involved in power module development since 1990. He has been engaged in power module development for about 20 years, from bipolar systems such as transistor modules and diode modules to MOS systems such as MOSFET modules and IGBT modules. For three years from 2011, he belonged to the technical support department of the power module at the German branch, and returned to Japan in 2014. After returning to Japan, he belonged to the Applied Technology Department and was in charge of technical marketing, development planning, and sales expansion technical support. Now he works as the General Manager of the Applied Technology Department, Power Device Works at Mitsubishi Electric Corporation, Fukuoka, Japan.

Eckhard Thal graduated from the Moscow Power Engineering Institute in 1980. Same year he joined ELPRO Berlin as a design engineer in the inverter development. In 1991 he received his PhD in the field of power electronics at the Chemnitz University. Since 1991 he is working for Mitsubishi Electric Europe (Ratingen/Germany) in application engineering for power semiconductors.