Silicon has been the semiconductor material that has been used the most in power electronics applications. The maturity of the silicon semiconductors and the optimization of the fabrication processes has placed the silicon derived technology close to theoretical material limits leaving very little room for further optimization [1]. However, it is now evident that wide bandgap (WBG) materials possess larger electrical field strength than silicon which makes it possible to achieve lower specific on state resistances. This also results in decreased parasitic capacitances which are responsible for the drive switching speed limitation. Read on to learn more about the wide bandgap materials and devices that incorporate the same.

The analysis of market drivers showed that accelerating the commercial uptake of more efficient approaches enabled by WBG devices requires driving down the costs of the components. This led to tremendous research around strategies for inexpensive WBG transistors for controlling high efficiency systems. Increasing the converter operating frequency allows it to reduce the size of the energy storage elements which directly have an impact on the converter volume, power density and cost.

However, the semiconductor switches that are utilized are far from being ideal and present switching losses due to overlapping between voltage and current during the switching transition. These losses put a practical limit on the converter operating frequency. Resonant topologies can accommodate a slightly increased switching frequency by inserting additional reactive elements but suffer from increased conduction losses due to reactive energy circulation [2]. Thus, switch mode power supplies have always been the key driver in the evolution towards higher efficiency and high power density designs.

Silicon carbide (SiC) and gallium nitride (GaN) are the main semiconductor materials adopted in the production of power semiconductors. The lower intrinsic carrier concentration in both materials as compared to silicon helps in reducing the leakage current thus making it possible to increase the semiconductor operating temperature. Furthermore, the thermal conductivity of SiC and the stable on state resistance in GaN devices makes these materials ideal for high temperature and high power density converter implementations [4]. 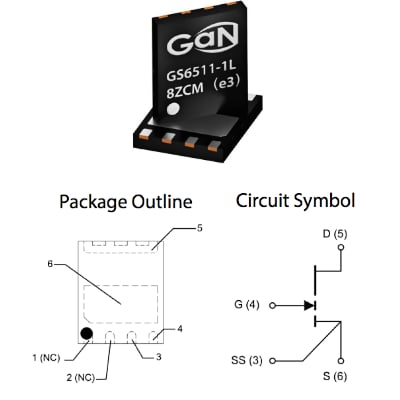 In order to make the most out of these technologies it is important to evaluate the available semiconductor devices for the specific desired application through conduction and switching loss models. This is a powerful tool in the design of optimized switched mode power converters. This type of evaluation helps the designer to study a wide range of semiconductor devices under different operating conditions in order to find the most suitable technology for the required optimization objective.

There are different ways to obtain a characterization model of the evaluated devices. The first and possibly the most accurate model is obtained by mixed mode simulation models that include the 2D finite element simulation models of the semiconductor structure that is linked to a circuit simulation program. However, these kinds of simulations require a huge amount of computational power and are not suitable for evaluating a large number of semiconductor devices under a wide range of converter operating conditions.

Another approach is to derive a mathematical model of the evaluated semiconductor based on measured semiconductor output characteristics and parasitic capacitances. This requires a lot of effort but these models predict the switching behavior of the characterized devices very accurately and even reduce the computational power requirement from mixed mode simulation models. The last method to accurately measure the device switching energy loss under a wide range of operating conditions is by using a conventional clamped inductive load circuit.

Once the semiconductor device is characterized, it needs to be evaluated. The same applies to WBG devices as well. In order to evaluate the possible advantages that can be obtained from replacing silicon devices with WBG semiconductors, the evaluation needs to be performed from a system level point of view. The evaluation procedure is typically based on comparison of semiconductor loss, input inductor, and filter size for a conventional converter operating in continuous and discontinuous modes of operation [4].

Electromagnetic interference (EMI) prediction models are used in the process. In order to build this model, it is required to conduct EMI measurements on a characteristic setup. The evaluation is then performed by comparing estimated semiconductor performance based on the characterization data and attainable advantages in terms of input inductor and filter size reduction. Even though this is the right approach, considering all the possible variations between the converter operating modes and operating frequency is tedious and challenging. This is because it requires accurate magnetic component loss and thermal models for different winding and core structures.