Litz wire conductors are well known and massively used in magnetic components dedicated to power electronic applications to reduce copper losses versus frequency. However, their modelization could remain complex or not fully fixed for an accurate prediction of the final temperature rise in the windings of switching transformers or resonant inductors. The best wire selection and accurate computing of its losses remain in the first position for high power density converters optimization.

The magnetic components used in such power electronic assemblies generally count for 1/4th to 1/3rd in volume, weight, and cost within such devices. Therefore, their optimization in terms of power density is fully mandatory till the limit of an acceptable efficiency and temperature rise depends also on the cooling strategy [1]. For transformers and inductors used in such parts, low-loss ferrite cores and Litz wire windings are mostly selected. The best Litz wire selection remains a must for copper loss reduction versus frequency.

This article will first summarize the well-known properties of Litz wire by highlighting special care and tips in its selection (part 1). The modelization approach of such conductors will be then discussed and the models available in FEA simulation tools will be compared. Eventually, a few words and references about the equivalent thermal conductivity that can be assigned to a given Litz wire will be introduced to help in thermal simulation (part 2).

Frequency Impact on the Wire Choice

Why Litz wire for conductors? It is well known that frequency effects in a metal can affect a lot of the losses in it when carrying an alternating current. Three major effects are identified as eddy currents, proximity effect, and fringing flux effect. The first is related to the self-induced magnetic field around a conductor that generates eddy currents circulating principally on its outer surface to try to cancel the effect that has given life to it (figure 3a). The proximity effect is something similar but related to the same effect in conductors in the neighborhood (figure 3b). Each turn perturbates the surrounding ones and is also influenced by them. The third effect can be related to the presence of any external magnetic field with time variation as is the case from airgaps cut in cores to fix some precise inductance value (figure 3c). 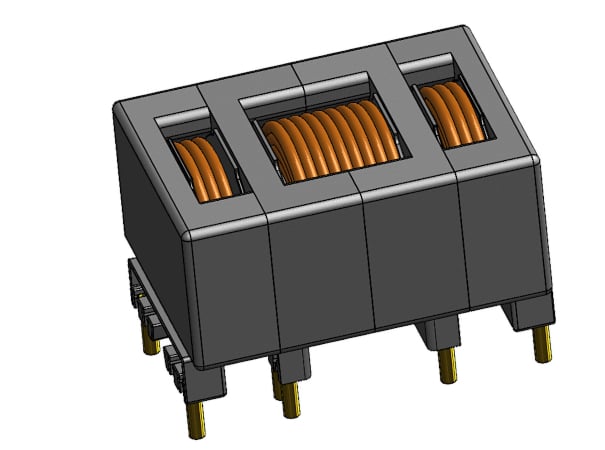 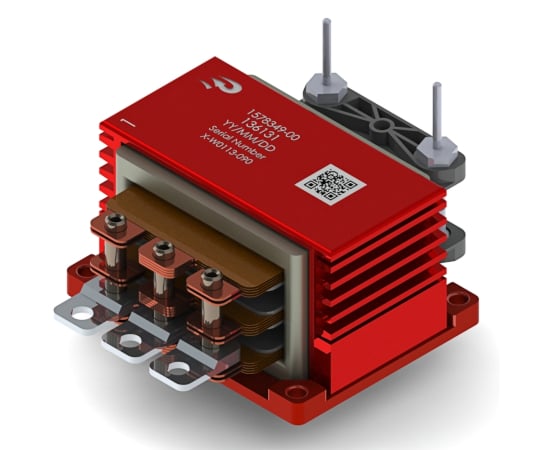 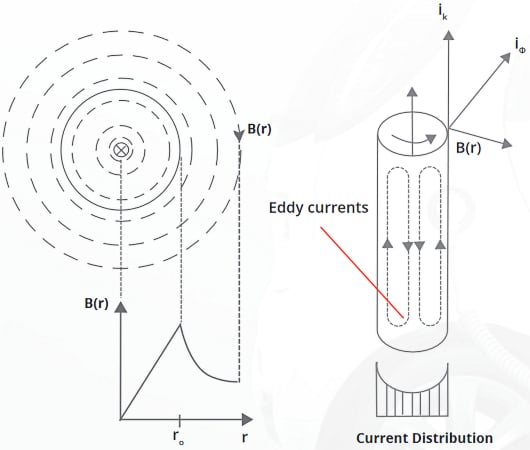 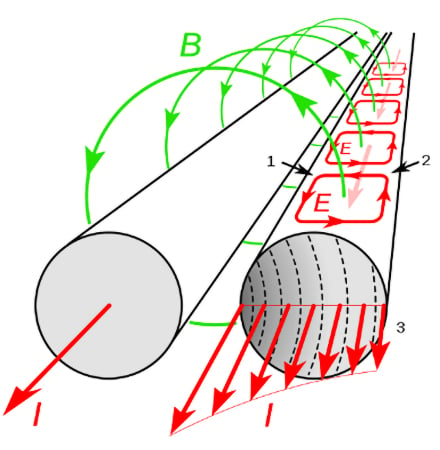 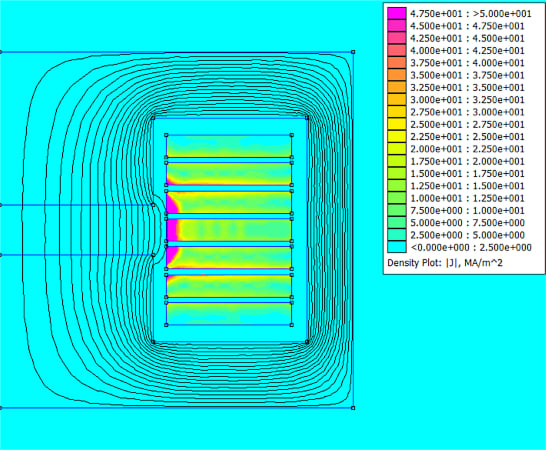 A key parameter to quantify this perturbating current distribution over the surface of the conductor is the skin depth expressed below (figure 4). It is well admitted that the first choice for the conductor diameter must always remain below 2δ (dconductor < 2δ) not to see a noticeable increase in its resistance. For instance, an easy calculation at 7δ diameter leads to twice the DCR value (figure 5). 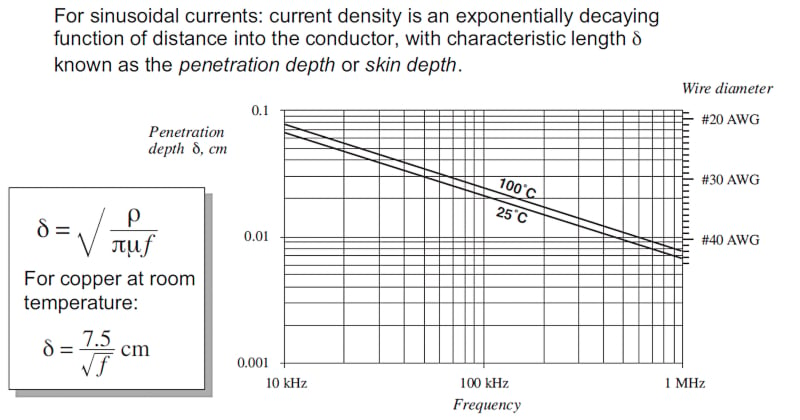 The above considerations are valid for a single conductor. However, these simple formulas and concepts clearly illustrate that according to the current to drive through the winding, parallelization of small conductors will be a must. They can be just wound multi-filar that it is not a good solution either for proximity effect between conductors or process optimization. Litz wire characterizes this parallelization plus a twisting versus length so that each strand passes equally through each position on the inside and outside of the bundle (figure 6). This prevents the circulation of currents between strands by reducing proximity effects.

It is particularly true when the component is submitted to a high-frequency switching with high current variations (for example resonant chokes with full wave excitation). Of course, other design considerations will be important to reduce the copper losses at the minimum, such as the winding structure (bifilar, concentric, multi-level interleaving…) or the core design (single or multigap…).

From a practical standpoint, it is not always easy to quantify the increase of copper losses versus frequency. For a 2-winding transformer, it can be possible to have an overview of the total AC copper losses by measuring its impedance versus frequency viewed from the primary side with the secondary shorted. Here, the core has normally no influence on the Rac measurement (ampere-turns cancelation or with remaining fully negligible magnetic induction) which is not the case for single chokes where such measurement must be taken with a lot of precaution because of a representative of core+copper losses at the end.

Below is an example considering a 2.3mm Litz wire diameter of different strandings (figure 7). We can clearly notice the improvement in the 100-200kHz operating region when the strand is of a lower diameter even if in some cases it could lead to higher estimated DC losses. As a matter of fact, the total copper cross-section can differ according to the number of strands assembled for the same overall diameter. So, a compromise to find can exist between the strand's thickness and the number to twist together. 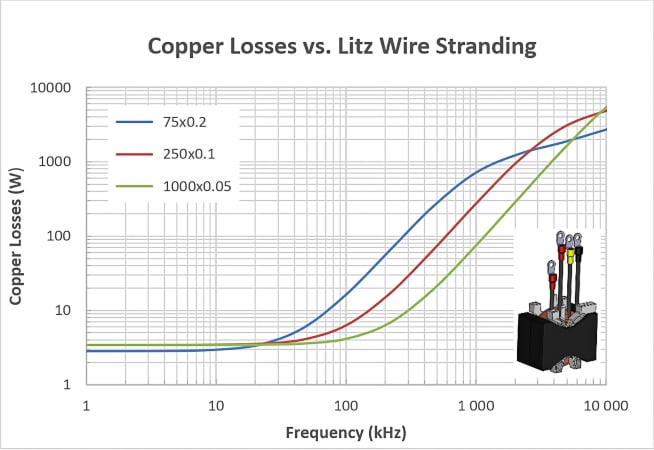 Fr = Rac/Rdc is a coefficient of interest that could be set as a design rule for given technologies and stranding (table 1). It shows the increase of copper losses vs. frequency depending on the wire and winding arrangements. The below table proposes some coefficients that can be applied for the total copper losses estimation with a good Litz wire selection for the windings. Of course, if the harmonics content of the current waveform is high, a more accurate study shall be performed.

Table 1. Optimized Fr coefficients for some given topologies/technologies.

The strand diameter selection can have a big impact on the real total AC copper losses of transformers or chokes wound by Litz wire. From such statements, the strand diameter must be optimized to keep the Fr ratio as low as possible without maximizing the cost of the product by expensive Litz wire application or too challenging an interleaving process in the winding construction.

Generally speaking, and because of the skin effect, the higher the operating frequency, the thinner the nominal single-wire diameter.

The Litz wire suppliers [3] often propose a table of recommended use according to the frequency range (table 2). It can be good to introduce some margins to consider the possible harmonics content of the current waveform which could be high for phase-shift half- or full-bridge ZVS topologies as well as for LLC/CLLLC in some cases.

In Litz wires, to consider a minimum interaction between several bundle diameters with δ skin depth, and in a simplified way, the maximum single wire diameter should be smaller or equal of nearly a third of δ (dstrand < δ/3). Example: F = 200kHz, δ = 0.148mm => dstrand ≈ 0.050mm.

Current Density and Number of Strands

When the strand diameter is selected, the number to consider will depend on the acceptable current density in the windings of the magnetic devices. Even if the total copper losses and the hotspot temperature shall be determined afterward, some additional design rules can be preliminary applied to confirm a possible diameter of the final conductor to use (table 3).

Litz wires cannot be only defined by the stranding. Other parameters of importance are the bunching and the twisting (table 4). As a matter of fact, the bunching (ex. : 50x5 vs. 10x5x5…) and its direction (S or Z at different levels) could affect a lot the frequency behavior (figure 8). The twisting (number of rotations per meter or lay length or pitch) is normally calibrated to have at least 3 rotations along the mean turn length of the winding; this is to balance the best proximity effect cancellation. 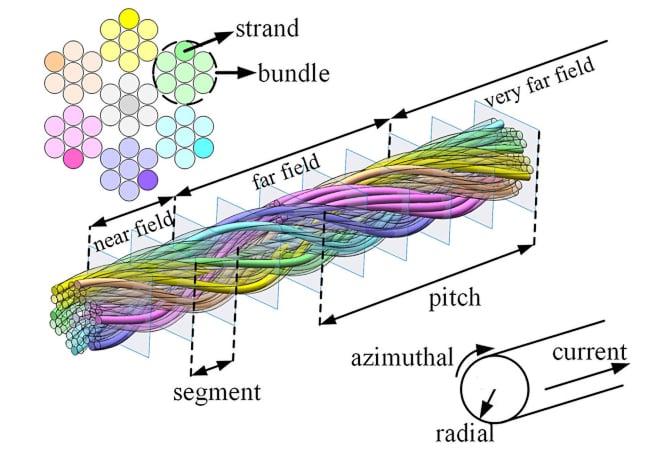 Some rules can be applied for the bunching definition. The maximum number of strands at first bundle level (N1,max) can be given by the below formula [4] where δ is the skin depth at the defined operating frequency and temperature, and ds is the selected strand diameter:

Another parameter that will impact the overall diameter is the type of insulation. The following section will be dedicated to the presentation of the different technologies, possible application, and advantages of each.

When the copper distribution is fully defined for the best performance in the application, criteria for the isolation must be added. Of course, the strands are isolated as common enameled wires and the same standard and grades applied. Thermal class is F/155°C or solderable H/180°C according to IEC 85 in most of the cases. Varnish thickness is normally according to grade 1 to offer a limited overall diameter as well as an easier solderability when connecting all the strands together at the outputs (by tinning, electrical soldering, or hot-crimping methods…).

Litz wire often offers a serving for protection or enhanced isolation between turns, layers, or windings (figure 9). It could be:

The use of Litz wire in wire wound products increases cost and decreases the amount of copper within the core window. Depending on the expected performances vs. frequency and level of isolation it could have a huge weight in the cost breakdown of the final product [8]. However, it remains today the first choice in resonant wire-wound inductive components used in some kW to tens of kW automotive converters where heating and efficiency come always under the scope of power density increase.

This article is the first one in a two-part series.