This article discusses the brief history of transformers and highlights the important things to keep in mind in choosing standard or custom inductors.

Magnetics represent the most ancient of technologies used in modern electronics systems. Despite being with us for almost 200 years, it is still the most critical component in power supplies. Nothing has been able to replace magnetics in terms of performance, size, and cost.

Invention of the Transformer

In the early part of the 19th century, Faraday and Ampère were busy researching the interaction of magnetic fields with electric currents and voltages. There were two aspects of the interaction that led directly to the invention of the transformer. The first led to Faraday’s Law of Induction which stated that a changing magnetic field would induce a voltage across a coil of wire, as shown in Figure 1. When the magnet is plunged into the coil, the voltmeter moves in one direction, and when it is pulled out of the coil, the voltmeter moves in the opposite direction.

This coil and magnet experiment is something that most schools will illustrate to students at an early age.

Another experiment taught to children early in their education is the electromagnet. If you wrap turns of wire around an iron nail and pass current through the wire, the nail becomes magnetized and can pick up other iron objects. 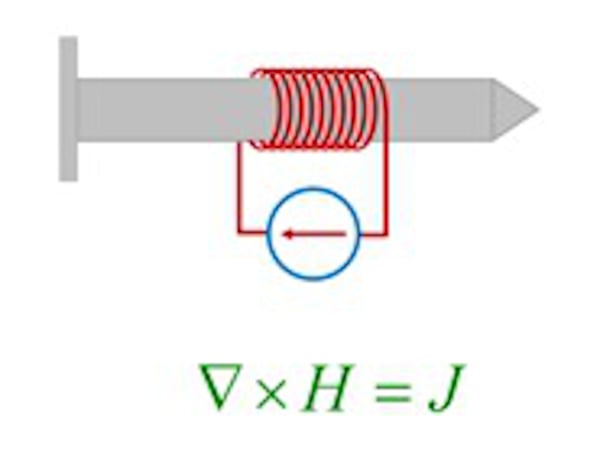 What is missing from early education is the link between these two laws, and how they can work together to make a useful electromagnetic device. If we put two windings on the iron nail, and apply a current to one of them, it will produce a magnetic field that increases as the current increases. This is a changing magnetic field, which then works with Faraday’s Law of Induction to provide a voltage on the second winding (or current if the second coil is shorted). Hence, a current in one winding gives rise to a current in the other winding and the coupling mechanism is the changing magnetic field between the two.

Faraday recognized this connection, and built the first transformer in 1831. Rather than using a straight nail, he used a toroid of iron, which provided better coupling. With this, he showed that a voltage or current in one winding induced a voltage or current in the other winding. This structure is not very different from modern magnetics designs – only the core material is changed. 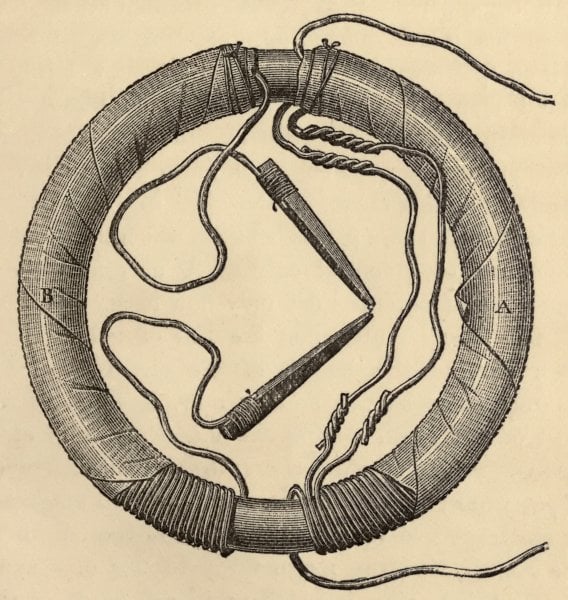 Figure 3: The first transformer, made by Faraday in 1831

Early experiments like these produced weak forces with the electromagnet, or small deflections of the voltmeter. They conceal how much power could be transmitted, the coupling speed, and the efficiency of the process. However, it did not take long for the early experiments to be turned into highly practical applications. 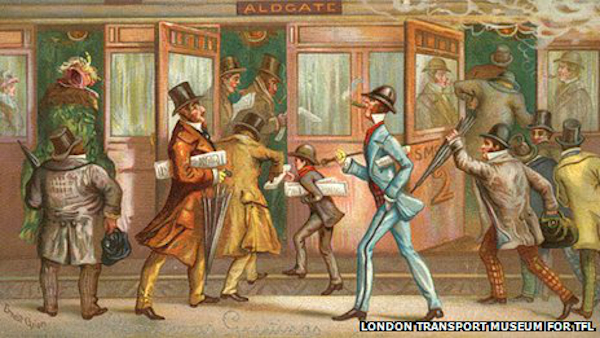 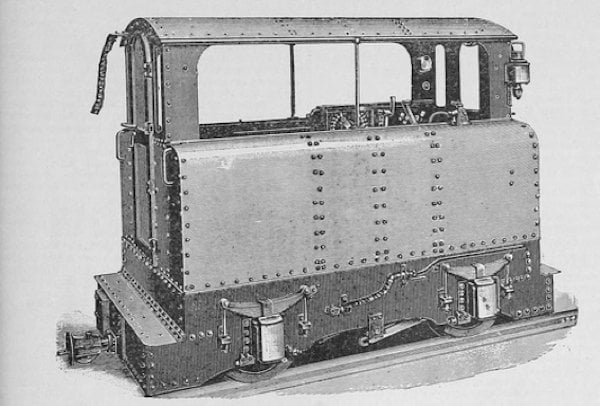 Figure 4: Application of transformer technology by the 1890s

Not long after Faraday’s transformer, engineers were making motors, trains, and transformers at increasing power levels. Early trains appeared in the 1830s around the world, and by the 1890s, London started using electric trains in their underground system.

Transformers turned out to be highly efficient—well above 99%. There is almost no limit to the power level. Transformers exist today that can process over 1 GW of power. However, due to their longevity, transformers are often regarded as slow and low-tech when compared to modern electronics. Despite this misperception, they are still unsurpassed in performance in modern electronic power supplies.

Low-frequency magnetics were extremely mature by the beginning of the 20th century. The advent of vacuum tubes created radio technology and suddenly catapulted electromagnetic devices into the multi-MHz range. And—they worked. That is because the electromagnetic effect moves not slowly, but at the speed of light, and there is no theoretical limit to the bandwidth of transformers.

We saw the invention of semiconductors in the 1960s, power MOSFETs in the 1980s, and wide band-gap devices in the 2000s. Transformers continue to reign supreme, much to the chagrin of many program managers and semiconductor companies. How can it be that a 200-year-old technology is still the best way to convert power? And, more importantly, how is it that my engineers don’t seem to know how to design these things?

In this high-technology age where electronics parts can be ordered and delivered overnight, inductors and transformers are a sticking point in power supply development. Most designs need custom magnetics parts that are not ‘off-the-shelf’ components. This is due to the extremely wide range of power electronics applications. 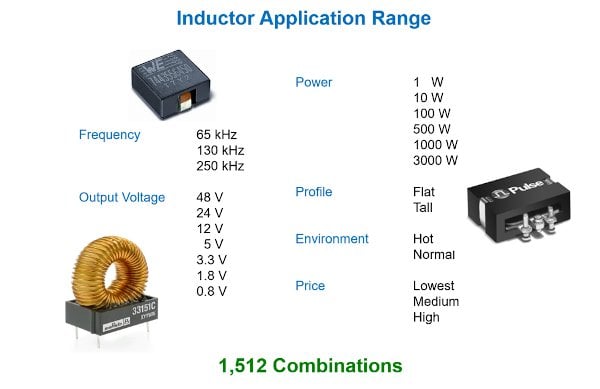 Figure 5 shows the variables involved in designing a power supply at power levels from 1 W to 3 kW. Three switching frequencies are considered, 65 kHz, 130 kHz and 250 kHz. This covers the majority of applications, although there are many other frequencies used. When all permutations are considered, we only really need about 1500 different types of inductors to cover most applications.

Not every engineer realizes that some off-the-shelf parts will suffice. For example, if a 134 uH part is needed and a part cannot be matched, sometimes the inductor value is not a critical design element. In that case, standard parts can result in good price and performance.

Transformers can create a problem. One of the functions of a transformer is to change the voltage level, which is why the inductor variation count is not so high. Input voltage variation does not appear in figure 5. However, each voltage range will need a different transformer turns ratio, as you can see in figure 6. In addition, every topology needs a different transformer design to provide the proper circuit connections. Multiple outputs make the process even more variable. 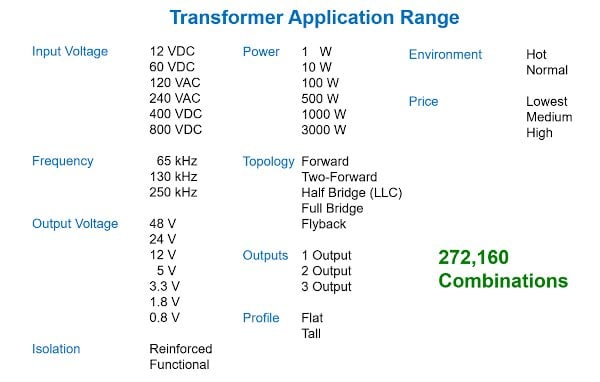 After all variations are considered, the industry needs about 272,000 different transformer designs. It is unreasonable to expect manufacturers to cover this wide range, so we resort to custom transformers.

A custom transformer may seem like a necessary evil in the development process, and a standard inductor will be used. Be cautioned that it is not always that straightforward. The objective of a designer is to maximize circuit performance, efficiency, size, and price. It is often easier to build a better inductor than buying standard parts, keeping in mind that there is a tradeoff in the price of development against the benefits of performance advantage.

It is difficult to find a good and comprehensive guide for designing magnetics. Techniques and opinions vary on the subject in published works. Imagine the frustration of a newcomer to the industry, or a recent graduate. Most universities teach theory, but not real-world application. What we need is clarity and guidance.

To begin, know that there are low–cost parts available in abundance. Figure 7 shows the basics required to get started with magnetics prototyping—wire, foil, litz, bobbins, toroids, two-piece cores, and tape. The next step is deciding how to configure these basic elementary parts to get outstanding performance from your design. Thus, the series on magnetics design begins here to help bring clarity to the process. Stay tuned for next month’s article.

Custom magnetics are an essential element of modern power supply design if you need isolation and high performance. Whether developing custom magnetics or working closely with a vendor, comprehension of the process is critical and worthy of time in the development schedule. Very few engineers are equipped to design magnetics, so we will begin unfolding the methodology in this series.