This is the second of a three part series. In Part 1, we described a quasi-class E circuit providing variable power into inductive and resistive loads

This is the second of a three part series. In Part 1, we described a quasi-class E circuit providing variable power into inductive and resistive loads with a fixed supply voltage while maintaining ZIS turn-ON and ZVS turn OFF 1. In this installment, we examine reactance tuned methods providing electronically variable power.

Power output for a class E switch mode circuit may be controlled with an electronically variable reactance, by moving an L-C network up and down its resonance curve. Practically speaking, the authors are unaware of any magnetic materials that perform well as saturable reactors at 3 MHz, much less near 30 MHz. This leaves dynamic capacitance control.

The Search for a Practical Electronically-Tuned Capacitor

A diode junction has a depletion region and junction capacitance that vary with reverse voltage. This “varactor effect” has been used for electronic tuning of radio receivers, and other small signal applications for decades. Recently, an RF power amplifier technique called “load modulation” was described [2],[3]. We tested silicon fast recovery diodes, silicon carbide Schottky diodes, MOSFETs, and conventional high voltage silicon rectifiers for use as electronically tuned capacitances.

We found fast recovery diodes with suitable reverse voltage-vs.-capacitance characteristics. An RFN5TF8S is an ultra-fast rectifier with a reverse recovery time in the 30-50 nsec range. A model for this part is included with LTSpice 4. A simulation was performed with these diodes. A simulated resonant frequency range of more than 2:1 was obtained with a reverse DC bias voltage between 30 and 600 volts DC (Figures 2 and 3).

We followed with an in-circuit evaluation of these ultra-fast recovery diodes. While these simulations looked “ok”, we were surprised by in-circuit testing.

High RF dissipation was noted for the “fast” diode devices, as well as the SiC Schottky diodes. Voltage waveforms showed that neither reverse breakdown nor forward conduction was occurring. The loss mechanism was unclear.

We tried standard and super junction silicon MOSFETs as varactor diodes. To do so, we shorted the gate and source leads together, and used the drain/source terminals as a voltage-variable capacitance. Then, we placed two of these devices back to back. This resulted in another surprise, this time pleasant. A total dissipation of less than 1 watt at the 25-watt power level and less than 3 watts at the 100-watt level was noted using two SPP17N80C3 super junction devices.

Dissipation was determined by DC power substitution where DC dissipation (I x R) was adjusted to duplicate the temperature rise observed under RF conditions.

Standard 1N5408 3 amp 1000 volt rectifier diodes were tested as varactors with surprisingly good results. A single diode dissipated only 0.35 watts at 25 watts RF power and 2.5 watts at 100 watts RF power. Four such diodes were connected in parallel. At 100 watts RF power, the dissipation of the diode network was about 1.5 watts. Splitting C2 into C2 and C3 reduced RF voltage on the “varactor” diodes circuit in Figure 4 gives 30dB power control. 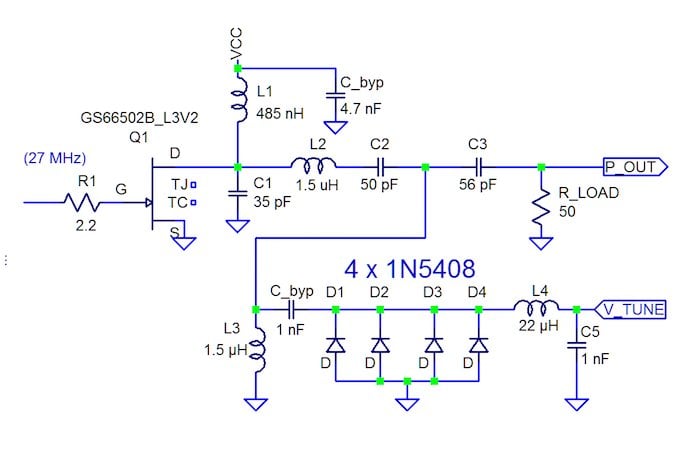 Next, we devised a three bit digitally switched capacitor network providing 8 capacitance steps. An ideal high-frequency capacitor switch should have near-zero resistance when “ON”, and very high resistance when “OFF”. In addition, the “off”-state capacitance should be very small. Of all the semiconductor technologies considered, only a PIN diode technique seemed feasible. Other switch technologies had too much “off” state capacitance. Specialized semiconductors are usually required at our power levels. 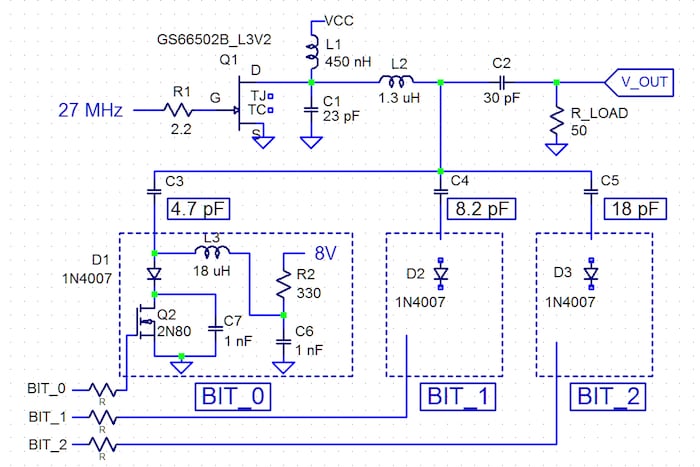 In a nutshell, a PIN diode can control ampere-level RF currents with a DC bias current in the tens-of-milliampere range. PIN diodes have been used as RF switches from 3 MHz into the gigahertz region for several decades. In the “on” (forward-biased) state, an equivalent impedance of 0.3 – 2 ohms can be achieved. In the “off” (reverse biased) state, an equivalent series resistance of 1000 to 10,000 ohms, with a junction capacitance of 0.5 to 3 pF is attainable. A good overview of PIN diode theory and operation is available [6].

We found several RF-grade PIN diodes having suitable breakdown voltage ratings. The cost was prohibitive for these specialty parts. Standard silicon rectifier diodes with breakdown voltages above 500 volts generally have a PIN structure. Common rectifier diodes such as the 1N4007 (1A, 1000V). have been used as an inexpensive substitute for pricey RF-grade PIN diodes, controlling up to 100 watts of RF power [7].

Figure 5 shows a schematic for our PIN switch concept. At 100 VDC input and 110 watts, maximum output the PIN switch is effectively an open circuit when reverse-biased. The inductor L3 was chosen to resonate with the PIN diode “off” capacitance, making the switch transparent to circuit operation. The temperature rise of the 1N4007 when “off” was too small to measure accurately.

In the “ON” condition, 20 ma of forwarding bias was applied to the PIN switch. The diode temperature rise was again too small to measure accurately. With 65 watts output into a 50 Ohm load, the load current was about 1.15 amperes. Since the switched capacitance is a fraction of the total tuning capacitance, the PIN switch conducts only a fraction of the total load current. If the PIN switch resistance is 1 ohm, we estimate that milliwatt level dissipation would result during the “on” state. 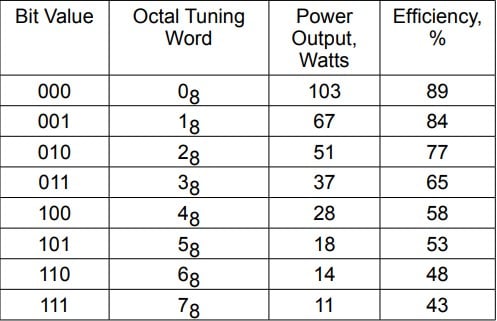 As long as no DC current is being drawn, PIN diodes tend to self-bias near the peak applied RF voltage. Thus, a high voltage negative bias source is not required to turn off the PIN diodes, simplifying the 3-bit PIN switch. The complete power amplifier and capacitor network circuit is shown in Figure 5. The power output versus tuning state, from 000 (octal “0”) to 111 (octal “7”), is shown in Table 1. Column 4 shows DC - RF efficiency for each state. The circuit connects the PIN diode to ground, simplifying drive circuitry considerably and increasing the output power range.

In the final installment, we will discuss our experiments and test results further we will look at rectification to D.C. and other issues.

Paul Reich is a freelance consultant. His specialties are radio frequency design and simulation. In a previous life, he held various positions at Motorola, Inc. and the Chamberlain Group. Paul earned his BSEE in 1976.