This article will analyze the most commonly used converter LED driver topologies.

In the last article, we introduced the basics of how LEDs work and how they are used in the design of LED lamps. We showed the differences between DC and AC LED drivers and the main factors that are commonly considered by designers.

This article presents the LED driver topologies that are more widely used and enter the details of each one. A final comparison table summarizes the differences between the analyzed topologies, considering the main design factors already introduced in the first article.

The BUCK topology is the simplest. It generates an output voltage lower than the input voltage and it can be designed also in the “reverse” version: 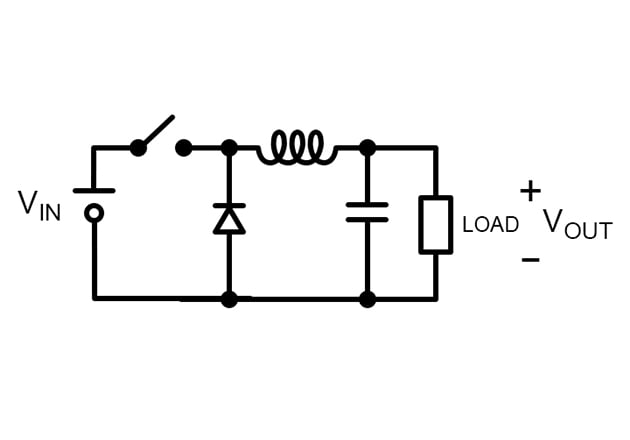 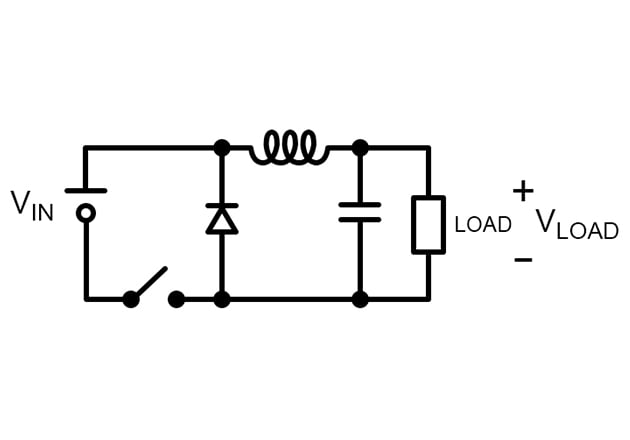 The circuit of Figure 1a is very popular for LED drivers from DC voltage sources (usually batteries). The following schematic shows the typical Buck LED driver circuit from a DC source: 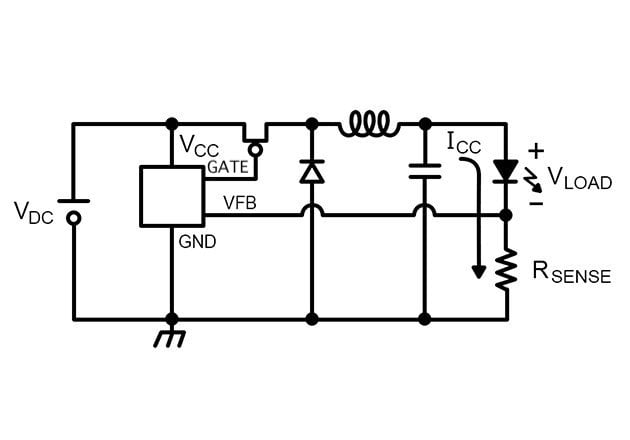 The driver is powered from the input voltage and drives a PMOS. A sense resistor in series with the LED load generates a voltage VFB proportional to the current in the load and this voltage is used to make current feedback to the driver. The gate of PMOS is driven in order to obtain the required current in the LED load.
In this circuit the sense resistor is ground referenced, making the current feedback simple to measure from the driver.
The source terminal of the PMOS is directly connected to VIN, so it is easy to drive the gate switching between GND and VIN.

In AC applications, where a high input voltage is present, the gate of the PMOS cannot be driven to GND during the switching cycle because the VSG would be very high, well over the maximum ratings of the MOSFET (Typ. 20V).
For this reason, it is preferable to use the circuit of Figure 1b, the reverse-buck, that is derived from the buck by simply moving the switch from the positive terminal of the input to the negative terminal. In this way, an NMOS can be used and its gate can be driven by a ground-referenced circuit like the following: 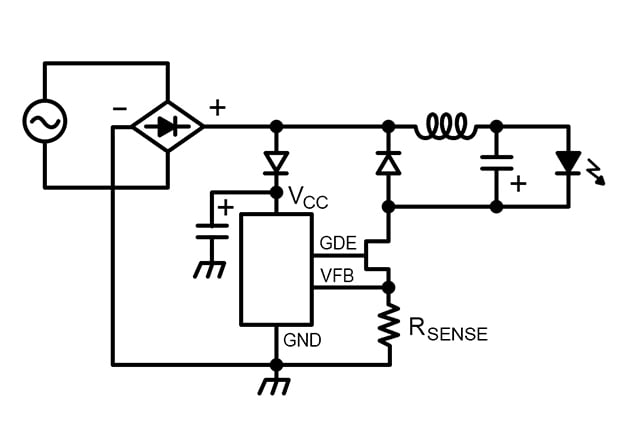 The driver takes power from the bridge output through a rectifier, so its VDD is almost DC. It drives the gate of the NMOS and in this topology, the sense resistor is placed on the source terminal of the NMOS, so it is still ground referenced.

It is important to note that since the sense resistor is placed in series with NMOS, in this circuit the feedback is on the input current, not on the LED current. This causes a worse luminous flux regulation, but permits to drive the NMOS in order to shape the average input current in phase with the input voltage, thus obtaining a high PF (Power Factor).

A downside of AC-REVERSE-BUCK LED drivers is that considering that the voltage at the output of the bridge goes down to 0V in each cycle, this topology works only when VIN>VOUT, so there are portions of the input sinewave where the AC-REVERSE-BUCK driver cannot drive the output LED string. In order to minimize this effect, usually the REVERSE-BUCK is used to drive LED strings with voltage <50V, so the portion of the sinewave where the LEDs are not driven is negligible.

The boost topology generates an output voltage higher than the input voltage: 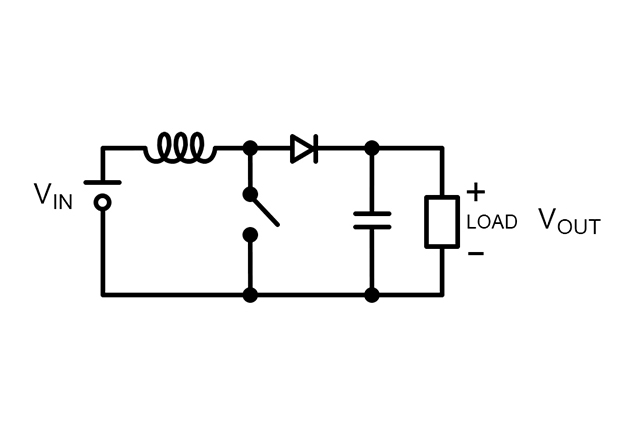 This topology is often used to power strings of multiple LEDs from a single battery cell (i.e. Li-Ion cell 3.7V). The voltage from the battery is lower than the total LED string voltage, so a DC Boost LED driver must be used: 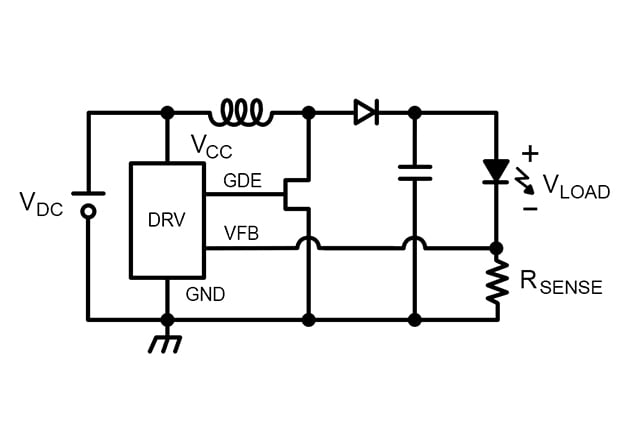 In this circuit the gate of the NMOS can be driven easily from the driver, the sense resistor is ground referenced and the driver can be directly powered from the DC input. All basic requirements for a simple driver are met, there isn’t any “reverse” version.

The Boost topology is generally not used for AC LED drivers because the output voltage for the LED string is usually lower than the AC input voltage. 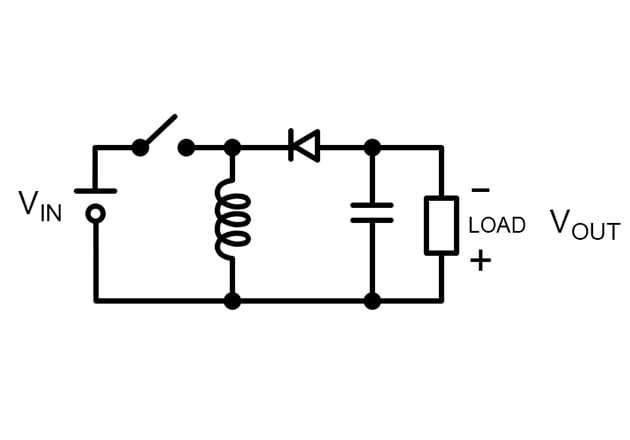 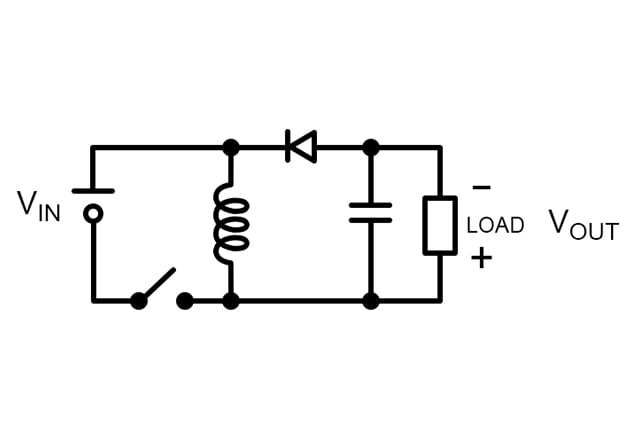 For the Buck-Boost topology also exists the “reverse” version that is obtained moving the switch from the positive terminal of the input voltage to the negative one.

Similarly to the BUCK topology, the standard version (Figure 10a) would be preferred for DC LED drivers, but in practice, it is not used because it would generate a negative voltage also across the sense resistor and this negative voltage should be read from the driver as the output feedback. For the driver, it would be difficult to manage with negative feedback.

Instead, the “reverse” version is very useful for AC LED drivers because it permits to generate the required output voltage over the full cycle of the AC input voltage. There isn’t the limit showed for the AC Buck LED driver (portions of the sinewave cycle where the driver cannot drive the output): 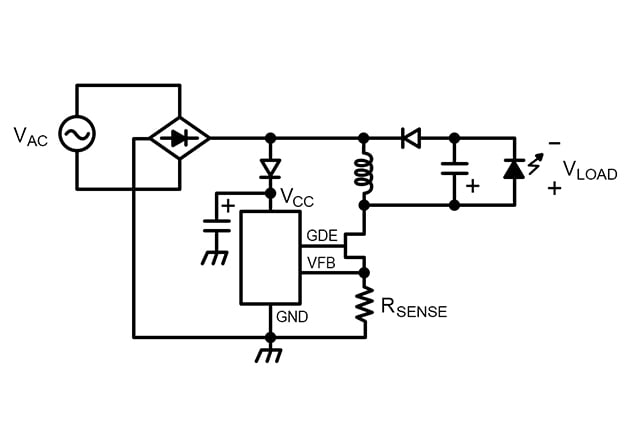 For the AC-BUCK LED driver, this circuit is able to make PFC (Power Factor Correction) since the sensing resistor is in series with the NMOS and the feedback on the input current makes it possible to shape the average input current in phase with the input voltage.

In the Flyback topology, the designer can configure the circuit to generate an output voltage that can be higher or lower than the input voltage, based on the project specifications.

The basic FLYBACK topology can be considered as derived from the Boost by replacing the inductor with a transformer: 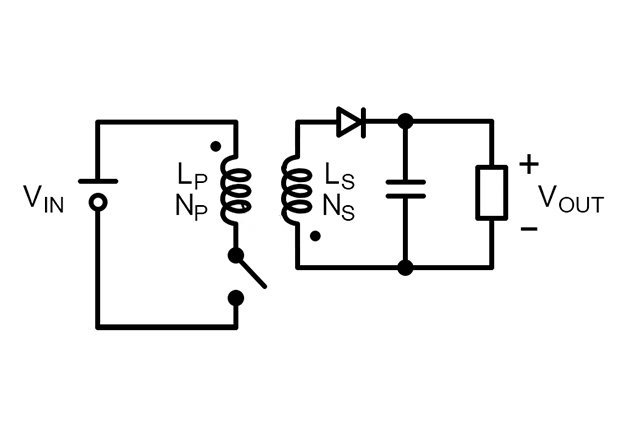 The output voltage can be determined by the duty cycle of the switch and by the turns ratio NP/NS of the transformer.

Since the flyback uses a transformer, it has the unique feature of load electrically isolated from the input. This is generally an important feature for AC LED drivers, where often electrical isolation is requested: 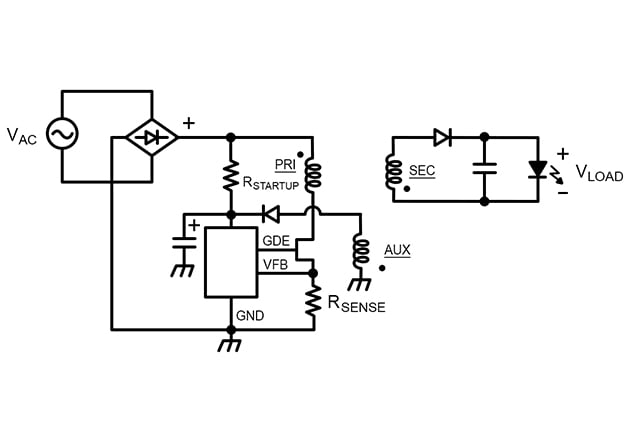 In a real flyback schematic, there is a third winding (called AUX winding) that has the same polarity of the secondary winding. It is generally a low voltage and low current winding with the purpose to provide a supply voltage for the driver once the system is started. The resistor RSTARTUP provides the low current required by the driver to start until the AUX winding will be powered.

Furthermore, the flyback can also make the PFC like the previously illustrated AC LED drivers.

After the analysis of each topology, the following table compares them considering the main factors that are commonly considered by designers of LED drivers (already listed at the beginning of the article):

Table 1. A comparison of topologies.

A Review of LED Topologies

The article introduced power LEDs and presented generic schematics for the most used DC and AC LED drivers, examining for each one the main characteristics and explaining the typical usage.
Often is not obvious and immediate to choose the right topology, the optimum choice can be a trade-off between factors that depend on the project specifications and the designer experience can make the difference. The comparison table presented at the end of the article summarizes the main factors that are usually considered.